Lines and Geoglyphs of Nasca and Palpa 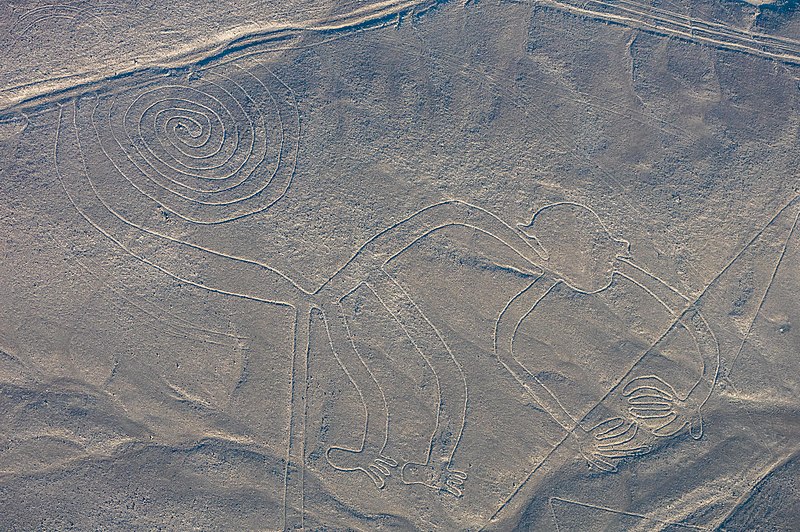 Located in the arid Peruvian coastal plain, some 400 km south of Lima, the geoglyphs of Nasca and the pampas of Jumana cover about 450 km2 . These lines, which were scratched on the surface of the ground between 500 B.C. and A.D. 500, are among archaeology’s greatest enigmas because of their quantity, nature, size and continuity. The geoglyphs depict living creatures, stylized plants and imaginary beings, as well as geometric figures several kilometres long. They are believed to have had ritual astronomical functions. 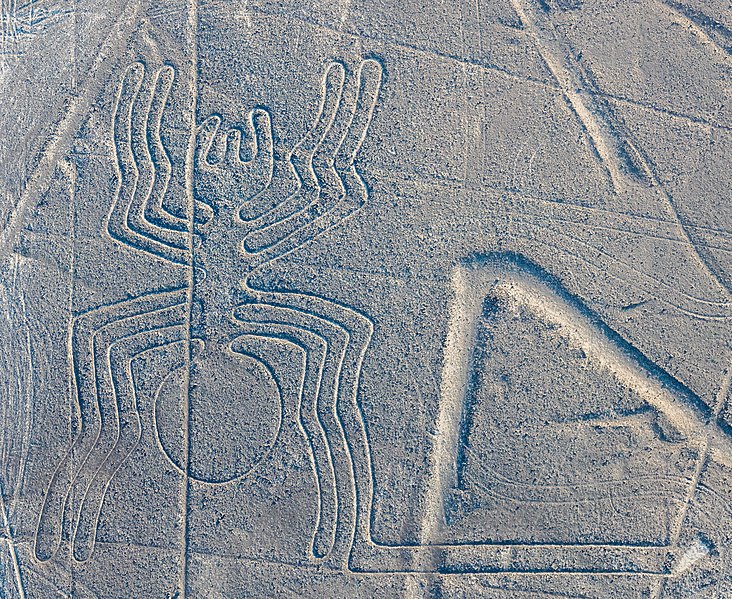 Located in the arid Peruvian coastal plain, some 400 km south of Lima, the Lines and Geoglyphs of Nasca and Pampas de Jumana are one of the most impressive-looking archaeological areas in the world and an extraordinary example of the traditional and millenary magical-religious world of the ancient Pre-Hispanic societies which flourished on the Peruvian south coast between the 8th century BC and the 8th century AD. They are located in the desert plains of the basin river of Rio Grande de Nasca, the archaeological site covers an area of approximately 75,358.47 Ha where for nearly 2,000 uninterrupted years, the region’s ancient inhabitants drew on the arid ground a great variety of thousands of large scale zoomorphic and anthropomorphic figures and lines or sweeps with outstanding geometric precision, transforming the vast land into a highly symbolic, ritual and social cultural landscape that remains until today. They represent a remarkable manifestation of a common religion and social homogeneity that lasted a considerable period of time.

They are the most outstanding group of geoglyphs anywhere in the world and are unmatched in its extent, magnitude, quantity, size, diversity and ancient tradition to any similar work in the world. The concentration and juxtaposition of the lines, as well as their cultural continuity, demonstrate that this was an important and long-lasting activity, lasting approximately one thousand years. Intensive study of the geoglyphs and comparison with other manifestations of contemporary art forms suggests that they can be divided chronologically from the Middle and Late Formative (500 BC – 200 AD) to the Regional Development Period (200 – 500 AD), highlighting the Paracas phase (400 – 200 BC) and the Nasca phase (200 BC – 500 AD). There are two categories of glyphs: the first group is representational, depicting in schematic form a variety of natural forms including animals, birds, insects, and other living creatures and flowers, plants, and trees, deformed or fantastic figures and objects of everyday life. There are very few anthropomorphic figures. The second group comprises the lines, which are generally straight lines that criss-cross certain parts of the pampas in all directions. Some are several kilometres in length and form designs of many different geometrical figures – triangles, spirals, rectangles, wavy lines, etc. Others radiate from a central promontory or encircle it. Yet another group consists of so-called ‘tracks’, which appear to have been laid out to accommodate large numbers of people.

Criterion (i): The Nasca Lines and Geoglyphs form a unique and magnificent artistic achievement of the Andean culture that is unrivalled in its extension, dimensions and diversity and long existence anywhere in the prehistoric world.

Criterion (iii): The Nasca and Pampas de Jumana Lines and Geoglyphs, through its unique form of land use, are an exceptional testimony of the culture and magical-religious tradition and beliefs of the societies that developed in Pre-Columbian South America between the 8th BC and 8th AD centuries.

Criterion (iv): The system of lines and geoglyphs, which has survived intact for more than two millennia, evidences an unusual way of using the land and the natural environment that represent a highly symbolic cultural landscape, using a construction technology that allowed them to design large-scale figures with outstanding geometric precision.

Nazca or Nasca is a town in Peru’s Southern Coast region. It is most famous for the Nazca Lines, a collection of long lines, geometrical figures, and giant drawings in the desert sand that have been inscribed on the UNESCO World Heritage list. Nasca is a Quechua word meaning “pain” or “suffering”. The area was so-named because of the lack of water. The name became “Nazca” under the Spanish, but has now reverted to “Nasca” in official and common use. (The z-spelling is still most commonly used in English.) Today’s Nazca town is on the site of where the ancient Nazca civilization was based after the fall of its first capital, Cahuachi, around AD 400. It has an exotic, dusty, desert setting but holds little enchantment. It can provide between a few hours’ and a few days’ entertainment depending on one’s interest in the ancient Nazca people. For much of their history, the… [read more].

Ica is a hot, busy and chaotic city at the Peruvian Coast. It’s famous for its wine. Ica is about 4-5 hours by bus from Lima, connections are frequent. To Nazca is only 2-3 hours. In Ica visitors may visit the Huacachina Lagoon, the only oasis in South America, surrounded by huge sand dunes where you can practice sandboarding. There are several vineyards and wineries, which produce Pisco, the national beverage, and wine. but the one that is of most interest to visitors is probably El Museo Regional de Ica, the archaeology museum, is full of clay pottery, mummies, trepanned human skulls (skulls that have had holes drilled into them for surgical reasons, while the person was alive), and textiles from the various indigenous groups that have lived in the Ica region for thousands of years. The dry sand from the desert preserves the bodies and fabrics in impressive condition. The museum costs S/10… [read more].

Ayacucho is in the Southern Sierra region of Peru. The population is about 100,000, altitude 2,700 m. Ayacucho is embedded in a broad sunny valley with mild climate. It is home of the Morocucho people, a group of the Quechua. During the 1980s and early 1990s, Ayacucho was mostly under control of the Sendero Luminoso, an extreme leftist terrorist group. After the successful anti-terror fights under president Fujimori, the influence of the Sendero Luminoso decreased almost completely. The Tourist Office is found in the Plaza de Armas. The airport has flights from Lima. Small airlines in Peru are a bit sketchy, but a good alternative for those who don’t like a rough long bus ride. Daily buses to and from Lima on a well-paved road (11 hr). It goes over a high mountain passes which make some people sick. Daily buses to and from Pisco the same well-paved road (6 hr). Daily buses/colectivos to and from… [read more].