These tourist attractions could vanish in your lifetime; Meghan Jones; OverSixty

Source: These tourist attractions could vanish in your lifetime | OverSixty

UNESCO has named 53 sites on its List of World Heritage in Danger. Watch five of these ancient sites digitally transform to how they once looked long ago.

Source: Watch these 5 endangered UNESCO sites get digitally restored in a matter of seconds

Some of the world’s least-visited countries and territories have some of the best things travelers want: culture, history, gorgeous scenery. All that’s missing? Hordes of tourists.

The Pacific is home to only eight of the globe’s 1092 UNESCO World Heritage sites, a significant under-representation for an area covering one third of the globe, writes Luke Kiddle.

The race to save the mysterious Micronesian ruins of Nan Madol; Liam Fox; ABC News

Visiting the ruins of Nan Madol in the Federated States of Micronesia is like stepping into an Indiana Jones movie.

Source: The race to save the mysterious Micronesian ruins of Nan Madol

The mission was requested by the World Heritage Committee to ‘agree on a Desired State of Conservation for the removal of the property from the List of World Heritage in Danger (DSoC), based on the cultural attributes of Outstanding Universal Value and to be reached through a detailed assessment of the stability of the walls as a base for setting out a Conservation Strategy and corrective measures that can then be phased and costed. Efforts would then be made with the assistance of ICOMOS and UNESCO to find partners and donors to support this conservation project’. (Decision 40 COM 8B.22, Istanbul, 2016)

Experts still don’t know how the 100 artificial islands were constructed a millennium ago.

The ancient complex of Nan Madol on the island of Pohnpei in Micronesia has fascinated visitors for centuries. Now, thanks to satellite technology, researchers have captured the ruins from a perspective that’s rarely seen.

As Yahoo 7 reports, the new aerial footage debuted on an episode of the Science Channel series What on Earth? In the recent installment, experts discussed Nan Madol, a chain of intricate, human-made islands that is sometimes called the “Venice of the Pacific” and is a UNESCO World Heritage Site. The name Nan Madol means “spaces between,” a reference to the network of canals connecting the ruins.

The 100-odd blocky stone structures were built atop coral reefs in a lagoon off a remote island in the western Pacific Ocean. 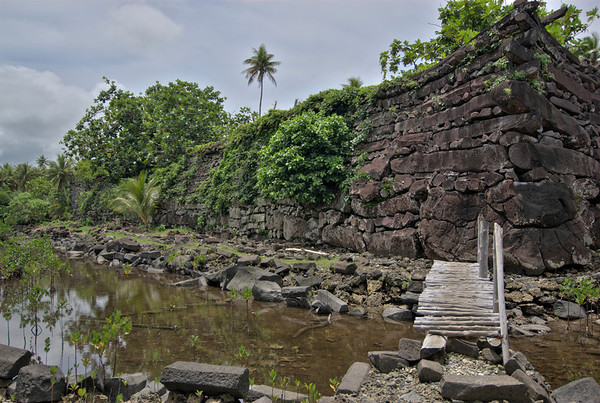 From the World Heritage inscription for Nan Madol:

Nan Madol is a series of more than 100 islets off the southeast coast of Pohnpei that were constructed with walls of basalt and coral boulders. These islets harbor the remains of stone palaces, temples, tombs and residential domains built between 1200 and 1500 CE. These ruins represent the ceremonial center of the Saudeleur dynasty, a vibrant period in Pacific Island culture. The huge scale of the edifices, their technical sophistication and the concentration of megalithic structures bear testimony to complex social and religious practices of the island societies of the period. The site was also inscribed on the List of World Heritage in Danger due to threats, notably the siltation of waterways that is contributing to the unchecked growth of mangroves and undermining existing edifices.

Pohnpei, FSM—As United Airlines’ “island hopper” flies, the mystical site of Nan Madol is only two hops away from Guam on the Micronesian island of Pohnpei.

Situated on the densely forested island’s southern coast of, Temwen (pronounced chum-one) in the municipality of Madolenihmw, Nan Madol consists of 92 manmade islets constructed from huge basaltic rock columns – the largest of which weighs approximately 60 tons. A recent geological study found that more than 40 percent of the hexagonal basalt columns at Nan Dowas, the main ceremonial center of Nan Madol, were inexplicably moved from Sokehs on the other side of the island to the ancient city by means which no one has yet been able to convincingly explain.