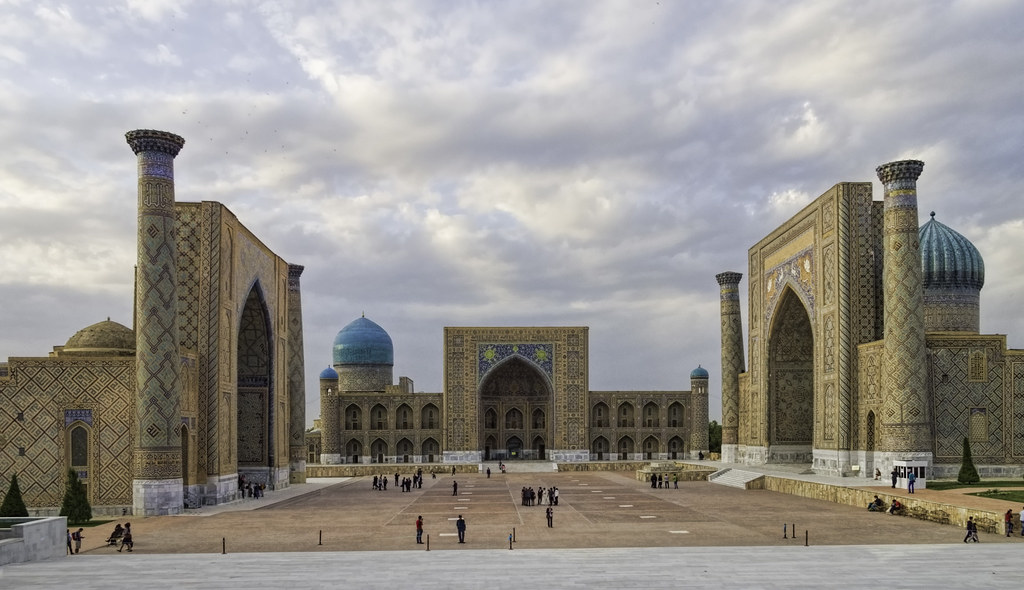 The historic town of Samarkand is a crossroad and melting pot of the world’s cultures. Founded in the 7th century B.C. as ancient Afrasiab, Samarkand had its most significant development in the Timurid period from the 14th to the 15th centuries. The major monuments include the Registan Mosque and madrasas, Bibi-Khanum Mosque, the Shakhi-Zinda compound and the Gur-Emir ensemble, as well as Ulugh-Beg’s Observatory. 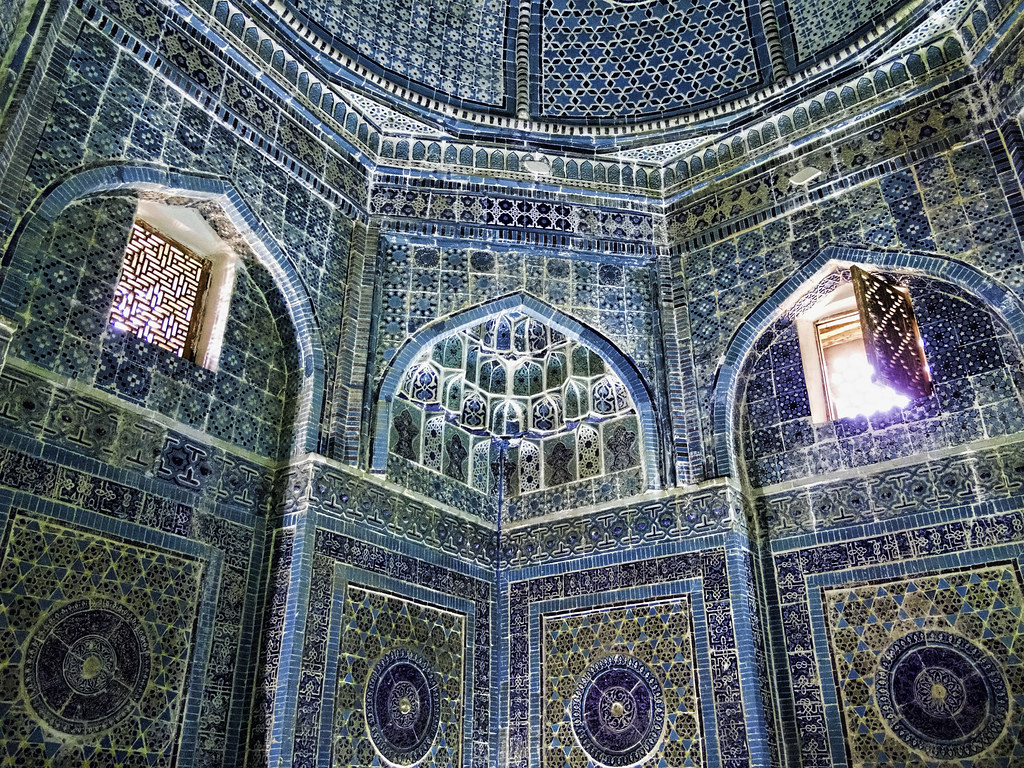 The historic town of Samarkand, located in a large oasis in the valley of the Zerafshan River, in the north-eastern region of Uzbekistan, is considered the crossroads of world cultures with a history of over two and a half millennia. Evidence of settlements in the region goes back to 1500 BC, with Samarkand having its most significant development in the Temurid period, from the 14th to the 15th centuries, when it was capital of the powerful Temurid realm.

The historical part of Samarkand consists of three main sections. In the north-east there is the site of the ancient city of Afrosiab, founded in the 7th century BC and destroyed by Genghis Khan in the 13th century, which is preserved as an archaeological reserve. Archaeological excavations have revealed the ancient citadel and fortifications, the palace of the ruler (built in the 7th century displays important wall paintings), and residential and craft quarters. There are also remains of a large ancient mosque built from the 8th to 12th centuries.

To the south, there are architectural ensembles and the medieval city of the Temurid epoch of the 14th and 15th centuries, which played a seminal role in the development of town planning, architecture, and arts in the region. The old town still contains substantial areas of historic fabric with typical narrow lanes, articulated into districts with social centres, mosques, madrassahs, and residential housing. The traditional Uzbek houses have one or two floors and the spaces are grouped around central courtyards with gardens; built in mud brick, the houses have painted wooden ceilings and wall decorations.  The contribution of the Temurid masters to the design and construction of the Islamic ensembles were crucial for the development of Islamic architecture and arts and exercised an important influence in the entire region, leading to the achievements of the Safavids in Persia, the Moghuls in India, and even the Ottomans in Turkey.

To the west there is the area that corresponds to the 19th and 20th centuries expansions, built by the Russians, in European style. The modern city extends around this historical zone. This area represents traditional continuity and qualities that are reflected in the neighbourhood structure, the small centres, mosques, and houses. Many houses retain painted and decorated interiors, grouped around courtyards and gardens.

The major monuments include the Registan mosque and madrasahs, originally built in mud brick and covered with decorated ceramic tiles, the Bibi-Khanum Mosque and Mausoleum, the Shakhi-Zinda compound, which contains a series of mosques, madrasahs and mausoleum, and the ensembles of Gur-Emir and Rukhabad, as well as the remains of Ulugh-Bek’s Observatory.

Criterion (i): The architecture and townscape of Samarkand, situated at the crossroads of ancient cultures, are masterpieces of Islamic cultural creativity.

Criterion (ii): Ensembles in Samarkand such as the Bibi Khanum Mosque and Registan Square played a seminal role in the development of Islamic architecture over the entire region, from the Mediterranean to the Indian subcontinent.

Criterion (iv): The historic town of Samarkand illustrates in its art, architecture, and urban structure the most important stages of Central Asian cultural and political history from the 13th century to the present day.

Samarkand or Samarqand is perhaps the most famous city of modern Uzbekistan. The city center is a UNESCO World Heritage Site. The name Samarkand is derived from Old Persian asmara (“stone, rock”) and from Sogdian qand (“fort”, “town”). Samarkand literally means “stone fort” or “rock town.” Samarkand had a central position on the Silk Road between China and the West. In the 14th century, Timur (Tamerlane) made Samarkand the capital of his empire. Samarkand is a must-see for all travelers visiting Central Asia. It was added to the UNESCO World Heritage List in 2001 as Samarkand – Crossroad of Cultures. The site of Samarkand was sporadically occupied in the Bronze and Early Iron Ages. A city was founded in pre-Achaemenid times, between 650 and 550 BCE. A wall followed the whole circuit of the plateau (5.5 km), complemented by another one which separates the town from the acropolis, situated in the northern part and itself including a citadel raised on an artificial platform [read more].

Jizzakh is a city (population in 2020) and the center of Jizzakh Region in Uzbekistan, northeast of Samarkand. The population of Jizzakh on 2020, was approximately 179,900. Jizzakh was an important Silk Road junction on the road connecting Samarkand with Fergana Valley. It is at the edge of Golodnaya Steppe, and next to the strategic Pass of Jilanuti (Timur’s Gate) in the Turkestan Mountains, controlling the approach to the Zeravshan Valley, Samarkand and Bukhara. The name Jizzakh derives from the Sogdian word for “small fort” and the present city is built of the site of the town which belonged to Osrushana. After the Arab conquest of Sogdiana, Jizzakh served as a market town between the nomadic raiders and settled farmers. The Arabs built a series of rabats (blockhouses) at Jizzakh, housing ghazis to protect the people. By the 19th century, these blockhouses had evolved into a major fortress for the Emirate of Bukhara [read more].

Qarshi (Karshi) is a city in southern Uzbekistan. The city now known as Qarshi, was called Nakhshab by the Persians and Nasab by the Arabs. After the Mongol invasion, Kapak Khan built himself a couple of palaces (karshi in mongolian) and the name was subsequently given to the new settlement. See: Kok Gumbaz mosque, Nasaf St. The biggest and most beautiful mosque of the city; Khoja Adbul Aziz Madrassah, Nasaf St. largest in town, now housing the Regional Museum with few exhibits about the history of Buchara emirate and lots of old photographs; Odin Madrasah (Rabiya Madrassah), Bazaar Square. a late 19th-century female madrassah; Kurgancha Mosque; World War II Memorial. dedicated to the Soviet casualties of WWII. The centerpiece is a bronze figure which stands closely behind the ‘Eternal Flame of Remembrance’; and Kashkadarya Bridge. 16th century bridge Further afield: Khasim Ata Ensemble (Pudina village, halfway between Karshi and Kasan). A complex built around the tomb of the 11th century Islamic teacher [read more].