Stonehenge and Avebury, in Wiltshire, are among the most famous groups of megaliths in the world. The two sanctuaries consist of circles of menhirs arranged in a pattern whose astronomical significance is still being explored. These holy places and the nearby Neolithic sites are an incomparable testimony to prehistoric times. 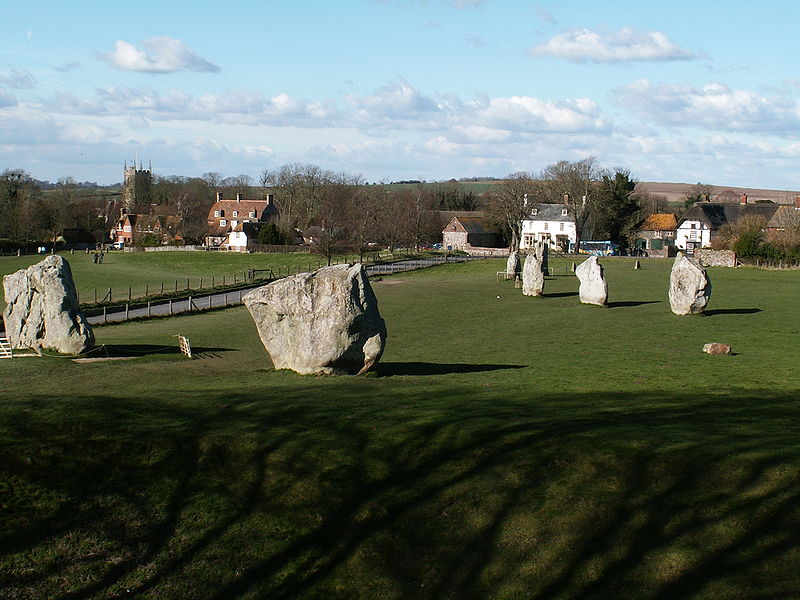 The World Heritage property Stonehenge, Avebury and Associated Sites is internationally important for its complexes of outstanding prehistoric monuments. Stonehenge is the most architecturally sophisticated prehistoric stone circle in the world, while Avebury is the largest. Together with inter-related monuments, and their associated landscapes, they demonstrate Neolithic and Bronze Age ceremonial and mortuary practices resulting from around 2000 years of continuous use and monument building between circa 3700 and 1600 BC. As such they represent a unique embodiment of our collective heritage.

The World Heritage property comprises two areas of Chalkland in southern Britain within which complexes of Neolithic and Bronze Age ceremonial and funerary monuments and associated sites were built. Each area contains a focal stone circle and henge and many other major monuments. At Stonehenge these include the Avenue, the Cursuses, Durrington Walls, Woodhenge, and the densest concentration of burial mounds in Britain. At Avebury they include Windmill Hill, the West Kennet Long Barrow, the Sanctuary, Silbury Hill, the West Kennet and Beckhampton Avenues, the West Kennet Palisaded Enclosures, and important barrows.

Stonehenge is one of the most impressive prehistoric megalithic monuments in the world on account of the sheer size of its megaliths, the sophistication of its concentric plan and architectural design, the shaping of the stones – uniquely using both Wiltshire Sarsen sandstone and Pembroke Bluestone – and the precision with which it was built.

There is an exceptional survival of prehistoric monuments and sites within the World Heritage property including settlements, burial grounds, and large constructions of earth and stone. Today, together with their settings, they form landscapes without parallel. These complexes would have been of major significance to those who created them, as is apparent by the huge investment of time and effort they represent. They provide an insight into the mortuary and ceremonial practices of the period, and are evidence of prehistoric technology, architecture and astronomy. The careful siting of monuments in relation to the landscape helps us to further understand the Neolithic and Bronze Age.

Criterion (i): The monuments of the Stonehenge, Avebury and Associated Sites demonstrate outstanding creative and technological achievements in prehistoric times.

Stonehenge is the most architecturally sophisticated prehistoric stone circle in the world. It is unrivalled in its design and unique engineering, featuring huge horizontal stone lintels capping the outer circle and the trilithons, locked together by carefully shaped joints. It is distinguished by the unique use of two different kinds of stones (Bluestones and Sarsens), their size (the largest weighing over 40 t) and the distance they were transported (up to 240 km). The sheer scale of some of the surrounding monuments is also remarkable: the Stonehenge Cursus and the Avenue are both about 3 km long, while Durrington Walls is the largest known henge in Britain, around 500 m in diameter, demonstrating the ability of prehistoric peoples to conceive, design and construct features of great size and complexity.

Avebury prehistoric stone circle is the largest in the world. The encircling henge consists of a huge bank and ditch 1.3 km in circumference, within which 180 local, unshaped standing stones formed the large outer and two smaller inner circles.  Leading from two of its four entrances, the West Kennet and Beckhampton Avenues of parallel standing stones still connect it with other monuments in the landscape. Another outstanding monument, Silbury Hill, is the largest prehistoric mound in Europe. Built around 2400 BC, it stands 39.5 m high and comprises half a million tonnes of chalk. The purpose of this imposing, skilfully engineered monument remains obscure.

Criterion (ii): The World Heritage property provides an outstanding illustration of the evolution of monument construction and of the continual use and shaping of the landscape over more than 2000 years, from the early Neolithic to the Bronze Age.  The monuments and landscape have had an unwavering influence on architects, artists, historians and archaeologists, and still retain a huge potential for future research.

The megalithic and earthen monuments of the World Heritage property demonstrate the shaping of the landscape through monument building for around 2000 years from circa 3700 BC, reflecting the importance and wide influence of both areas.

Since the 12th century when Stonehenge was considered one of the wonders of the world by the chroniclers Henry de Huntington and Geoffrey de Monmouth, the Stonehenge and Avebury Sites have excited curiosity and been the subject of study and speculation. Since early investigations by John Aubrey (1626-1697), Inigo Jones (1573-1652), and William Stukeley (1687-1765), they have had an unwavering influence on architects, archaeologists, artists and historians. The two parts of the World Heritage property provide an excellent opportunity for further research.

Today, the property has spiritual associations for some.

Criterion (iii): The complexes of monuments at Stonehenge and Avebury provide an exceptional insight into the funerary and ceremonial practices in Britain in the Neolithic and Bronze Age. Together with their settings and associated sites, they form landscapes without parallel.

The design, position and interrelationship of the monuments and sites are evidence of a wealthy and highly organised prehistoric society able to impose its concepts on the environment. An outstanding example is the alignment of the Stonehenge Avenue (probably a processional route) and Stonehenge stone circle on the axis of the midsummer sunrise and midwinter sunset, indicating their ceremonial and astronomical character. At Avebury the length and size of some of the features such as the West Kennet Avenue, which connects the Henge to the Sanctuary over 2 km away, are further evidence of this.

A profound insight into the changing mortuary culture of the periods is provided by the use of Stonehenge as a cremation cemetery, by the West Kennet Long Barrow, the largest known Neolithic stone-chambered collective tomb in southern England, and by the hundreds of other burial sites illustrating evolving funerary rites.

Southampton is a port city on England’s South East coast. Southampton has been a settlement since Roman and Saxon times, in Roman times the town was known as Clausentum. The Roman ruins are situated in a suburb called Bitterne Manor. In Saxon times the town was known as Hamwic. Its privileged position on England’s south coast made it Britain’s premier trading post. The town became walled in the medieval era, and some remnants of these defences remain throughout the city, most notably the Bargate in the middle of the city centre. Southampton was devastated by bombing during the Second World War, meaning that much of the city and its heritage was destroyed. As such the town and its architecture has quite a modern feel to it. Southampton has grown rapidly and become one of the 20 largest cities in England. [read more]

Bristol is the unofficial capital of the West Country of England. Famous for its maritime history it also offers a great and diverse range of attractions, hotels, bars and events. Bristol ranks fourth in England’s top visitor destinations, according to research in 2008, and the best time to visit is in the summer when major festivals are held in the city. Although cursed by some horrible post war buildings and disfigured by a chaotic road system, Bristol is nevertheless an amiable, grooved, laid-back city whose mellow vibe is reflected in the music of Massive Attack, Portishead and Tricky that perfectly captures the sultry, lean burn atmosphere of a warm summer’s evening in this historic and cultured city. Bristol is the United Kingdom’s eighth most populous city (approximately 421,000) and the most populated city in South West England, making it a core city in England. [read more]