“We cannot understand [Fascism], but we can and must understand from where it springs, and we must be on our guard…because what happened can…

The protest outside the church at Birkenau during last … Liberated in 1945, the Nazi concentration camp is one of Eastern Europe’s most visited sites—and most fragile…

Source: Can Auschwitz Be Saved?

From art installations to lectures, here are some ways to remember on January 27.

Source: 75 years ago, Auschwitz was liberated – here’s how the world is remembering 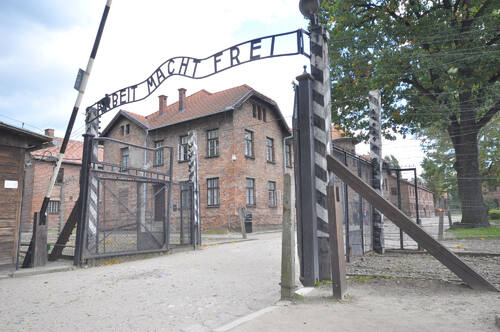 The appeal of vacations linked to sites connected to death, destruction and atrocities is a fast growing global sector known as ‘dark tourism’.

Source: Tourism Beginning To Profit From Its ‘Dark Side’

TEENAGERS from Wiltshire were left emotionally stunned when they visited the Nazi concentration camps at Auschwitz-Birkenau. Emily Hourican and Andrea Smith have some recommendations to help you on your way.

A pair of Hungarian tourists were busted Saturday trying to steal bricks from a crematorium at Nazi death camp Auschwitz as a “souvenir.” Another tourist saw the man and woman pilfering pieces of

Rappers Kollegah and Farid Bang have accepted an invitation to visit Auschwitz following outrage over their anti-Semitic lyrics. What should they expect? The facts and figures behind the Nazi’s monstrous death factory.

More than 30 million people from all over the world have visited the memorial and museum of the former Nazi extermination camp of Auschwitz-Birkenau in southern Poland since 1947.

“People who’ve been in Auschwitz once in their lives, see European history in a different light,” noted author Navid Kermani after his visit to Auschwitz. For most visitors, it’s an emotionally devastating experience that long lingers in the memory.

The controversial rappers Kollegah and Farid Bang, who have provocatively referred to Auschwitz inmates in their lyrics, have accepted an official invitation to the memorial site. While they haven’t announced the date this is going take place, they are likely to be affected by their experiences as well.

Documents from the post-war Auschwitz trial have been classed part of the UNESCO “Memory of the World Register”, underlining their significance as “common heritage of humanity”, Germany’s foreign minister said Wednesday.

The 1963-1965 trial of 22 Nazi officials who ran the Auschwitz death camp marked a turning point when Germans faced up to their role in the Holocaust.

Unlike the better known 1945-1946 Nuremberg trials where judges from the Allied powers presided over the hearings of top Nazis, the Frankfurt trial was the first in which Germans prosecuted Germans.

In 183 days of hearings, the trial “paved the way for an entire society to take a critical look in the mirror at the role of Germans as citizens, participants, followers and criminals,” said Foreign Minister Heiko Maas.

Classifying the court material from the Auschwitz trial in an international register is an “insurance against forgetting”, said Hesse science and arts minister Boris Rhein, in remarks carried by national news agency DPA.

The documents are “an important element in the fight against ongoing denial and relativizing of Nazi violations,” added Maas.

Auschwitz Tours reveal one of the well-known concentration camps in the world. In fact, it is a place of genocide during WWII where more or less 1.5 million people were killed.  The place has stayed as a living monument of death. The previous German Nazi Concentration and Extermination Camp is the main place of its kind that has come into on a UNESCO World Heritage List. At first it served as a concentration camp, but it rapidly became the place of extermination of over 1.5 million people. At the moment, the complex comprises of KL Auschwitz located in the city of Oswiecim and KL Birkenau in the village of Brzezinka and is easily reached for the guests assisted by a local guide. Without a doubt, it is a sober place which astounds all visitors, and a significant memorial to the victims of the extermination.

At the last part of the WWII, the SS made great efforts to wipe out what remained of the extermination camp, burn the archives, and kill all the people they referred to as the “Bearers of Secrets”.

Source: Things to Know Before You Go on an Auschwitz Tour

One of Laredo’s last living Holocaust survivors and an absconder of Auschwitz, Taibe Goldberg, passed away Dec. 29 at age 95.

Goldberg’s grandson, Adam Salamon, said she was larger-than-life, and so strong she was almost ahead of her time.

Goldberg was born in Königsberg, Germany in 1922 as Taibe Krakanovsky. She and her family moved to Lithuania, and by the time she was a teenager they were forced into the Kovno ghetto, which the Nazis had established there.

It was here that she witnessed her older brother refuse to salute a Nazi, for which he was shot and killed.

This event turned Goldberg into a survivor, her family said. She learned to escape the ghetto to get food, which she traded for her family’s possessions.

When she was a teenager, Goldberg and her family were taken to Auschwitz, where they were separated.

Two Belgians who were accused of trying to take porcelain insulators from the fence surrounding the Nazi concentration camp Auschwitz were acquitted by a court in Krakow on Friday.

This was reported by the Polish media agency PAP. The crime is punishable by 10 years in prison.

The two visitors, aged 48 and 51, were arrested in a wood near Auschwitz Museum in July 2016. Unable to explain away their behaviour, they voluntarily offered to serve a one-year suspended prison sentence but the Prosecutor’s office refused the deal. Everything in Auschwitz, including the fence which used to be electrified, now belongs to the Museum. It is listed as a Unesco World Heritage site.

The court decided that the three insulators they found on the ground outside the site were definitely “of historical value”, but did not have “particular cultural value”.

Prior to the trial prosecutors said the men risked up to a decade behind bars if found guilty.

A Polish court on Friday acquitted two Belgian citizens who had been accused of stealing parts of an electric fence from the former Auschwitz-Birkenau Nazi death camp, local media reported.

All objects in the former Nazi death camp, including its electric fence, are the property of the state museum at the site in Oswiecim, southern Poland, that is on UNESCO’s protected World Heritage list.

Identified only as 51-year-old Yann P.B. and William H., who is 48, the two men were detained in July 2016 with three porcelain electrical isolators in an area adjacent to the camp grounds.

The men testified that they came across the half-buried isolators as they were taking photographs along the fence perimeter outside the camp, PAP news agency reported.

Which of these wonders have you visited?

The top rated UNESCO sites in the world

If it weren’t for groups like the United Nations Educational, Scientific and Cultural Organisation (UNESCO), the importance of cultural monuments may have been lost. But travellers continue to visit these internationally recognised World Heritage Sites, all the while helping to preserve and protect them for future generations. These are the top 10 UNESCO World Heritage Sites according to travellers who have rated the them on TripAdvisor. Which of these wonders have you visited?