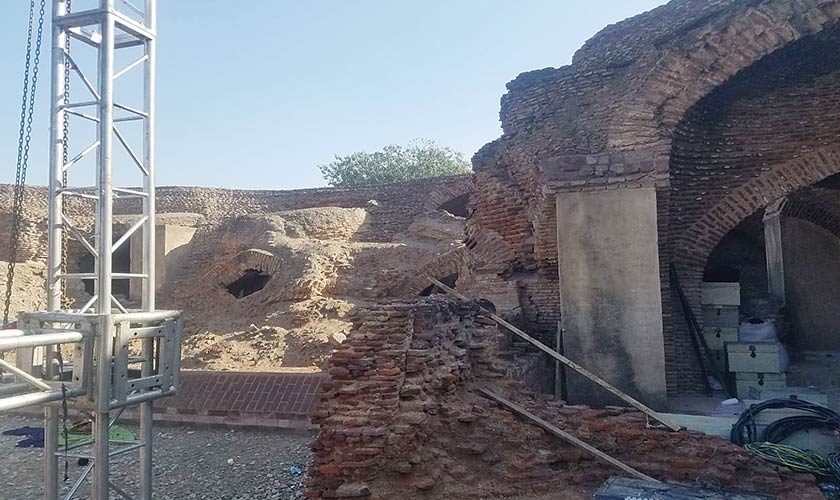 The mehndi event held recently inside the Lahore Fort has sparked intense backlash at the abuse of space of the UNESCO World Heritage Site, besides exposing the workings of the WCLA… 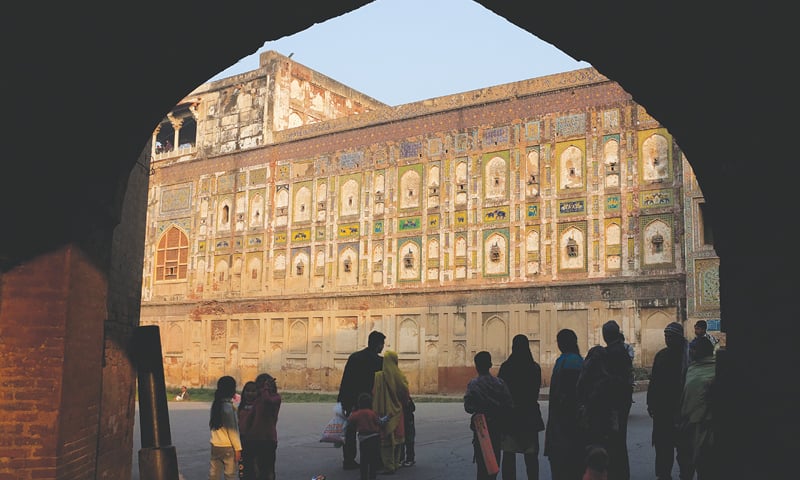 The international heritage site, Shahi Qila (Lahore fort), sheesh mahal has been turned into a event place for the valima ceremony. 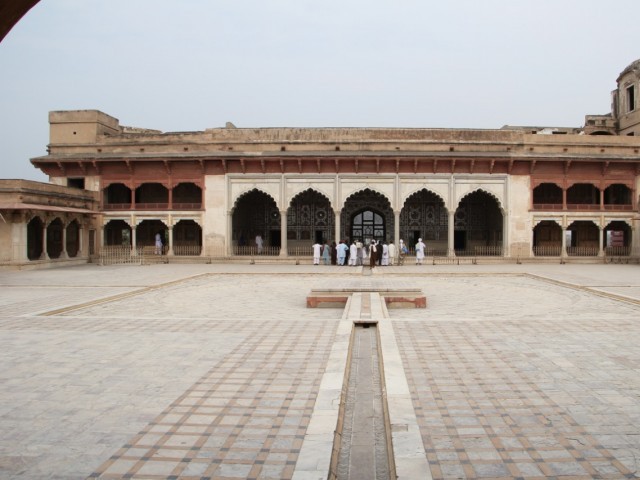 Source: Lahore Fort – a historical gift that keeps on giving

Lahore Fort and Shalamar Gardens might be added to the World Heritage in Danger list due to the construction of Orange Line.

Source: Shalimar Gardens and Lahore Fort to Be Added in UN’s “World Heritage in Danger” List

As you enter the imperial Lahore Fort through the British era built Postern Gate, you will be astounded by the gigantic wall in front of you which is 1450 feet long and 50 feet high. So now, you can imagine the grandeur and majesty of this wall. This is the world’s largest mural Picture Wall inside the Lahore Fort, and it is situated right here in Lahore, Pakistan. This wall was one of the reasons that the Lahore Fort was listed on the UNESCO World Heritage List in 1981.

The beauty of the wall cannot be described in words, and experiencing it is important to believe in its exquisiteness. The most appealing characteristic of the wall is that it deeply reflects the history and activities of the Mughals. It narrates their sports, events, cuisines, animals etc back in the time through the pictures on it.

Lahore is undoubtedly old. The earliest reliable mention of the city is in the historical texts and writings of Chinese traveller Xuanzang, who passed through the city in AD630.

Legend has it that the city’s original name was Loh, after the son of Ram, hero of the Hindu epic, Ramayana. Others think the city got its name from the word lohawar, meaning a fort as strong as iron. Muslim rule began in the city in 1206 when Qutub ud Din Aibak was crowned the first Muslim sultan of the subcontinent in Lahore. Nevertheless, it was later during the Mughal era that the city saw its greatest flowering and cultural growth. Scattered across town are numerous buildings and remnants from the reigns of all of the great Mughals.

However, during the 18th century Mughal rule and influence over the city started to decline when the city constantly at the risk of invasion.

The men huddled on what remained of the marble courtyard, the parts that hadn’t been ripped away by a bulldozer’s claw. A cloud of smoke rose above them as they passed around hashish joints — for the spiritual high, they said. They shook their heads to the frenzied banging of the drummers. Others leaped up, twirling, contorting and chanting in praise of the Sufi saint at whose shrine they worshiped.

In short, on a recent Thursday night, hundreds of worshippers at the Mauj Darya shrine repeated a tradition that the shrine’s keepers say has occurred in some form for about 450 years.

But activists fear this tradition may end with the shrine itself.

They say it is threatened by a 16-mile train line the government is racing to build through Lahore. The train route passes 11 heritage spots — from Mauj Darya, to a British colonial church, to the Shalimar Gardens, a UNESCO World Heritage site. It is expected to ferry about half a million people every day within five years, said the head of the Lahore Transport Authority, Khawaja Ahmad Hassan. 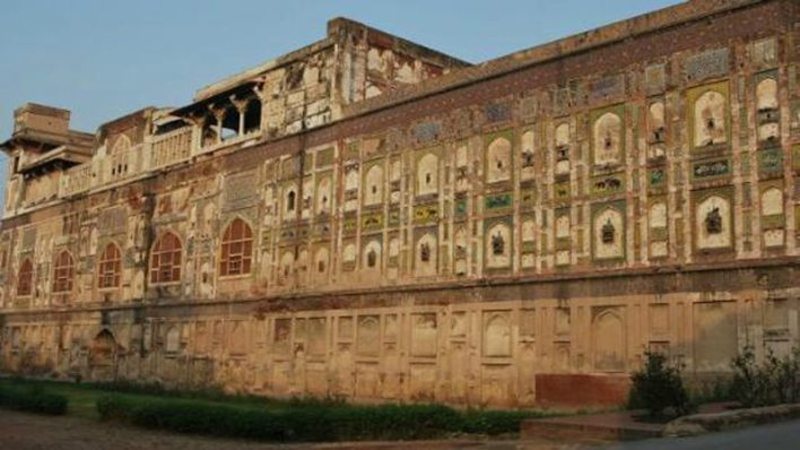 A prototype preservation was carried over a 45-feet high and 30-feet wide panel on the western segment of the Picture Wall by Aga Khan Trust for Culture (AKTC) and the Walled City of Lahore Authority (WCLA) involving the experts from Italy, Switzerland, Germany, France and Sri Lanka. This preservation process was started in 2016 and completed in December 2017.

LAHORE: Walled City Lahore Authority (WCLA) has planned to hold children’s literature festival inside Lahore Fort, a protected monument included in UNESCO’s world heritage list, where holding any kind of functions, festivals and public activities are banned, according to a report by a private media outlet.

Some 10 years back, Environmental Tribunal of Lahore had banned holding of any kind of functions, festivals and public activities inside Lahore Fort after which all such functions and activities were held at Hazori Bagh, which is between Lahore Fort and Badshahi Mosque.

The two-day festival will take place inside Lahore Fort just opposite Dewan-e-Aam on January 13 and 14 from 9am till 4pm and WCLA is expecting attendance of thousands of students, their friends and families in it, besides routine visitors of the fort, which are over 15,000 daily.

LAHORE – The Lahore High Court on Wednesday directed the Lahore Walled City Authority to submit a detailed report on the conservation project.

The court issued these orders on a petition challenging alleged establishment of a restaurant at the Lahore Fort, the world heritage site.

Justice Abid Aziz Sheikh passed the order observing that if the conversation work was being carried out at the world heritage site then the court should be apprised that whether the approval for this conservation was taken or not and which experts were consulted.  Advocate Khurram Chughtai, who represented the Lahore Walled City Authority, said that no construction or alteration work was being carried out at the site; it was conservation which was being done in light of the authority’s own laws.

The World Heritage Committee released the draft decision keeping in view the longstanding debate on the transportation-led development project of the Punjab government. The government is carrying out construction work inside the 61-metre protective buffer zone of the international heritage site of Shalimar Garden in violation of international laws as well as the national antiquities act.

This draft decision will be finalised through a vote of member states in the upcoming WHC meeting in July 2017.
Read more

LAHORE: The World Heritage Committee (WHC) has released its draft decision regarding construction of Orange Line Metro Train (OLMT) near the Shalamar Gardens on which it will finalize its decision through a vote of member states in the upcoming WHC meeting in July this year. This was stated by the representatives of civil society on Friday in a press conference here in Lahore Press Club.

Expressing their grave concern on construction work of OLMT, they said that despite the stay order of Lahore High Court on construction work near heritage sites, Punjab government is continuously violating the court orders. They informed that the decision draft of WCH clearly mentioned that the project poses an irreversible and permanent threat to Shalamar Gardens and Lahore Fort.

As requested by the World Heritage Committee at its 40th session in 2016 (Istanbul, Turkey), a joint World Heritage Centre and ICOMOS (International Council on Monuments and Sites) Reactive Monitoring mission is due to be undertaken in the near future as soon as the invitation letter from the Government of Pakistan (Province of Punjab) is issued.

LAHORE: The historic Lahore Fort and Shalimar Gardens may be removed from UNESCO’s list of World Heritage Sites if its team does not arrive in Pakistan to inspect the dangers faced by the two landmarks due to the construction of Orange Line train service, ARY News reported on Saturday.

It should be noted that Lahore Fort and Shalimar Gardens are mentioned as a single heritage/one unit site in the United Nations Educational, Scientific and Cultural Organization’s (UNESCO) list of world heritage sites.

According to details, UNESCO’s Reactive Monitoring Mission had submitted visa requests three months ago but the government is using delaying tactics to deny their requests.

The UN agency has expressed its concerns that a section of Shalimar Gardens is facing irreparable damage due to the construction of the train service.

There are only a few cities around the globe which provide a magnificent amalgamation of modernity and history. One of these cities is the city of Lahore which is considered as one of the most prestigious cities in the South Asia. Moreover, it is not only the provincial capital of Punjab but also the cultural capital of Pakistan.

When one thinks of Lahore, one is bombarded with images of culinary delights, historically rich monuments and the culturally rich bazaars and what not. To further beautify your perception about Lahore, Jovago Pakistan have compiled a list of the historically rich places that stand high and mighty across the city.

Considered to be one of the masterpieces of Mughal Era, Shalimar Garden is a must visit.