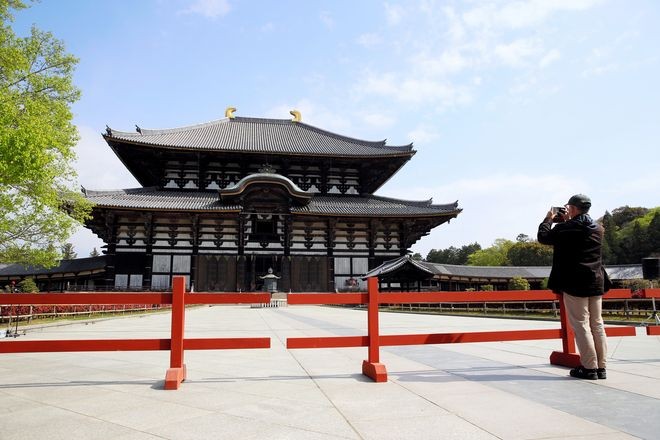 Nara’s fabulous Todaiji temple, home to one of the world’s largest Buddha statues, is suspending entry to the Great Buddha Hall while the new coronavirus rages.

Source: Great Buddha in Nara can still be seen, but only through window : The Asahi Shimbun

Considered messengers of the gods, 1,200 wild deer live in Japan’s first capital, Nara, roaming this ancient city’s main park and being hand-fed by crowds of tourists… 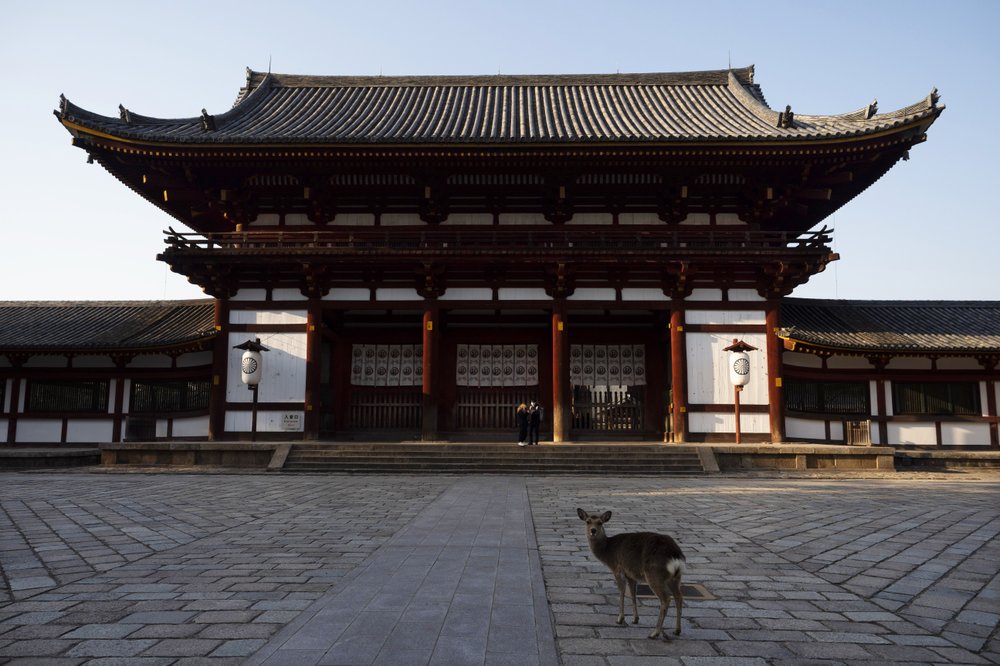 Nara, Japan boasts the world’s largest bronze Buddha statue and the UNESCO World Heritage Site it is enshrined at, Todaiji Temple, but tourists may be equally enamored by the famous free-roaming deer that reside in the nearby Nara Park. At least 1,500 deer roam around the park, and have become the symbolic… 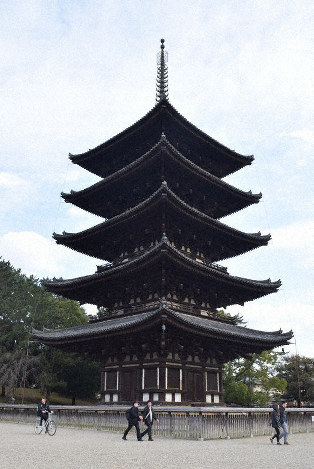 A five-storied pagoda designated as a national treasure at Kohfukuji temple, a UNESCO World Heritage site in this Japanese ancient capital city…

Source: Pagoda at World Heritage temple in Nara to undergo repairs for 1st time in 120 years 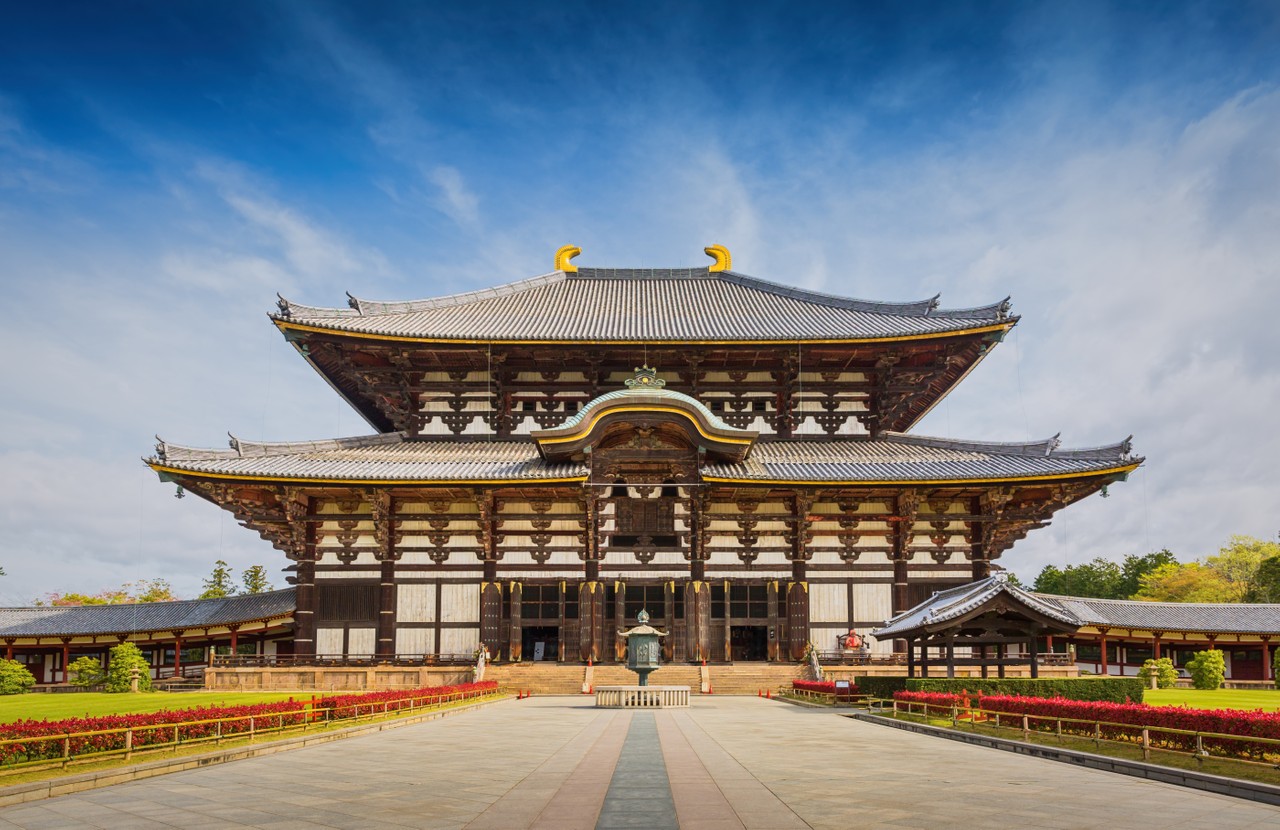 Home to eight UNESCO World Heritage Sites, traditional gardens and some of the friendliest inhabitants in all of Japan, here’s why the ancient city of Nara is not one to be missed… 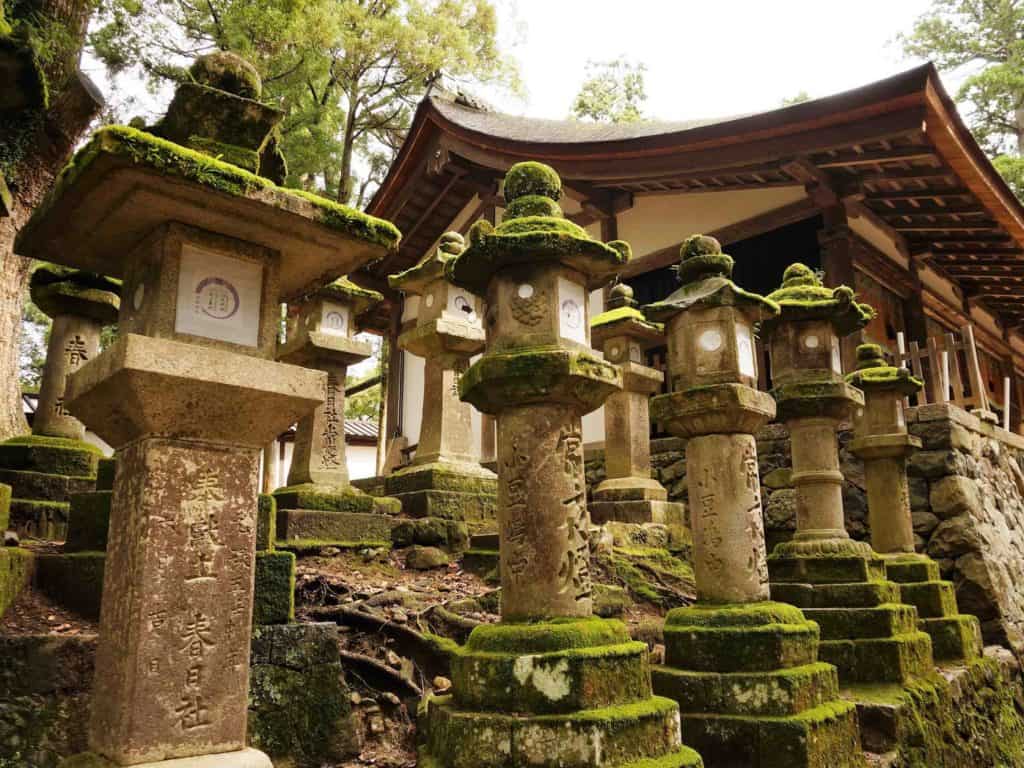 Osaka is gearing up to host the G20 summit on June 28 to 29. In honor of the diplomatic action, Karla has put together a quick list of some of the top things to do in Osaka, Japan’s third-largest city.

Source: Top things to do in Osaka, Japan 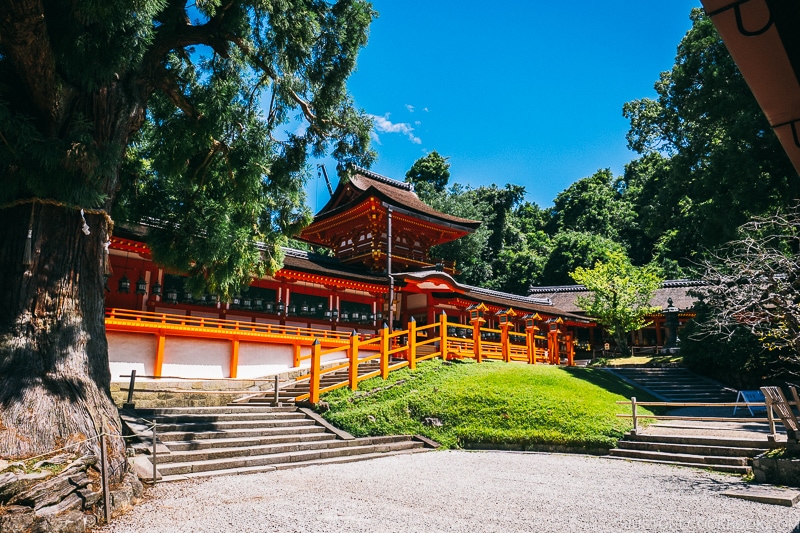 Explore historical and once powerful Nara temples and shrine in this travel guide. Enjoy the religious wonders around the city including the oldest wooden structure in the world. 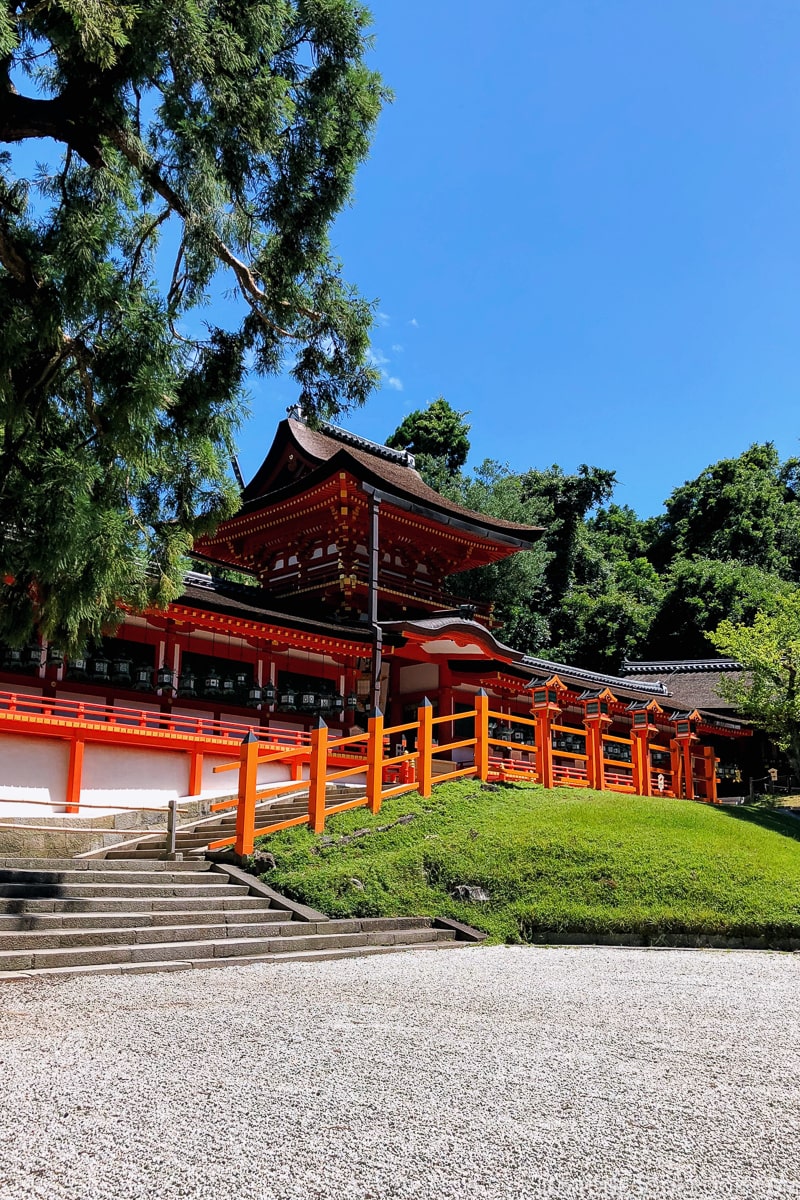 Kasuga Taisha is Nara’s oldest and most famous shrine, don’t miss this historical shrine with stone and bronze laterns and its brilliant vermillion columns surrounded by lush green trees.

If you’ve ever heard of the Silk Road, this refers to an ancient network of Eurasian trade routes that once connected the East to the West. These were routes that emerged across both land and sea, along which silk and many other goods were imported and exported.

For many years, this was the primary source of cultural crossover between Europe and Asia. And while the Silk Road stretched all across Europe and the Middle East, it is the Asian stops of the Silk Road that are most worth the trip today.

This is where the Silk Road originated, when China opened up to trade in the first and second centuries B.C. But while goods were traded, imported, and exported in and out of Asia, it has a much greater cultural significance. The constant movement and mixing of populations also brought about the transmission of knowledge, ideas, cultures and beliefs, which had a profound impact on the history and civilizations of the Eurasian peoples.

Source: 3 Must-See Destinations For Travel Along the Silk Road

A beautiful clash of contrasts is experienced in Japan. Take Nara and Kyoto, for instance, and you will see the startling disparity of the old and the current. They breathe the air of a conservative past that also overlaps heavily with modernism. These cities are big on traditional mood yet they exist in a progressive mode.

That’s how my family and I felt — the distant past meeting the persistent present — when we discovered Kyoto and Nara recently.

From our Airbnb in Osaka, our amiable guide Hiroshi met us for an exciting discovery of Nara and Kyoto. We boarded a family bus full of excitement and a bagful of snacks for the trip. (My family’s first destination when we are together abroad is the local grocery store. Our first discovery of any foreign culture is through its food — that’s how we were taught by our late parents. Or maybe that’s our excuse because we are afraid to get hungry.

Source: Nara and Kyoto: Cities that are as old as time yet upbeat as the modern rhyme

Nara and Osaka – two cities with two completely different characters you can explore in one journey. Stroll among the UNESCO World Heritage temples and shrines of Nara, and next the ultra-modern shopping facilities of neighboring Osaka less than an hour away. Spend the night in the best accommodations Japan has to offer for a trip you’ll never forget!

Walk among the World Heritage sites of ancient capital Nara

Approximately 1,300 years ago, Nara was the capital of Japan. Today, a large number of priceless cultural artifacts and historical sites remain. In 1998, the ruins of Heijo-kyo palace (the year 710) and Mt. Kasuga Ancient Forest were added to the UNESCO World Heritage list.

Within walking distance from Kitentsu Nara and JR Nara stations is Nara Park, where you’ll be greeted by over 1,100 deer and discover Kasuga Taisha (Kasuga Grand Shrine).

With so much to see and do in the land of the rising sun, it’s hard for first-time visitors to decide where to go. That’s why we’ve compiled a handy round up of some of Japan’s top destinations to help you out.

Think of Japan and images of cherry blossoms, Buddhist temples, and a Shinkansen train zooming past Mount Fuji probably come to mind. But this is a country of diverse landscapes and seasons, 30 national parks, 21 UNESCO World Heritage Sites, avant-garde design and architecture, and one of the most refined cuisines in the world. With so much to see and do in the land of the rising sun, it’s hard for first-time visitors to decide where to go. That’s why we’ve compiled a handy round up of some of Japan’s top destinations to help you out.

Cross all these stunning destinations off your travel bucket list with Wego, a nifty money-saving travel site where you can book cheap flights and get great deals on hotel rooms.

With years of wanderlusting under our belts, our complete travel bucket-list obviously reads miles long, so to narrow it down, we’re looking to some destinations that have a much-lauded UNESCO World Heritage stamp. Trying to tick off all of these gorgeous sites will take a bit of moolah, so unless you’re rolling in dough, we’re sure you could use some help finding the cheapest airfare and deals on hotel rooms (because saving every penny counts!) Enter Wego, a nifty travel site where travelers can save money by scoping out the most affordable airfares and luxe boutique hotels for less. Cool right?

TOKYO — The ancient Japanese city of Nara is famous for its old Buddhist temples and Shinto shrines, but also for its present-day deer.

Every year, hordes of tourists flock to Nara, south of Kyoto, to experience the peace of the historic sites and the rambunctiousness of the 1,200 or so deer that freely roam through the park in the middle of these sites.

However, the number of deer in Nara is about to get significantly smaller.

Nara Prefectural Government is embarking on its first cull of the deer, which were designated a natural treasure by the Japanese government in 1957. The deer are said to be the divine messengers of the Kasuga Grand shrine, a UNESCO World Heritage site and one of Nara’s main attractions.

The Nara Period (Nara Jidai) of ancient Japan (710-794 CE), so called because for most of that time the capital was located at Nara, then known as Heijokyo, was a short period of transition prior to the significant Heian Period. Despite the period’s brevity it still managed to produce arguably the most famous works of Japanese literature ever written and some of the most important temples still in use today including at Todaiji, the largest wooden building in the world at that time, which still houses the largest bronze statue of Buddha ever made.

Nara, or more correctly Heijokyo, as it was known then, was made the capital of Japan from 710 to 784 CE, after which time it was relocated to Nagaokakyo. The previous capital was Fujiwarakyo, but Nara had the advantage of being more centrally placed, located 30 kilometres south of Kyoto.

Japan is great for many things, among them opportunities to get up-close and personal with animals. Whether you visit islands filled with cats and rabbits, an onsen where red-faced macaques bathe or a fox sanctuary, Japan is paradise for people who love to pet things.

One of the most accessible kawaii (a Japanese word used to describe all things cute and cuddly) destinations is the city of Nara, located in easy day trip destination of both Kyoto and Osaka—that’s the good news. The better news? Its population of wild deer notwithstanding, Nara is also home to some of the world’s oldest architecture.

What’s the Story About Nara’s Deer?

The deer of Nara Park, in the center of Nara city, have been there since at least 1300, when the park was founded.