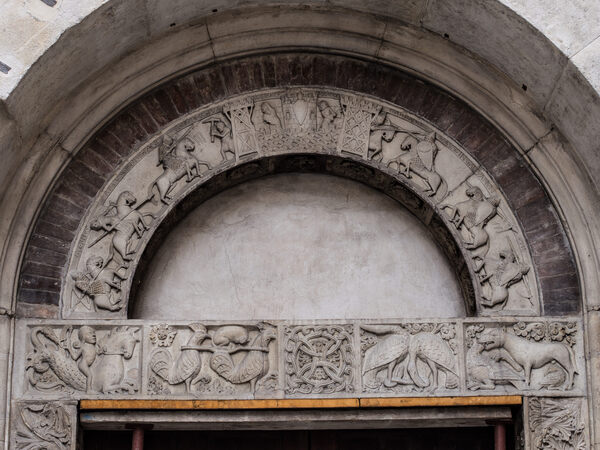 One of the earliest depictions of an Arthurian scene that is shrouded in mystery.

Some of the world’s most treasured cheeses, meats, and condiments can be traced back to this lavish region. 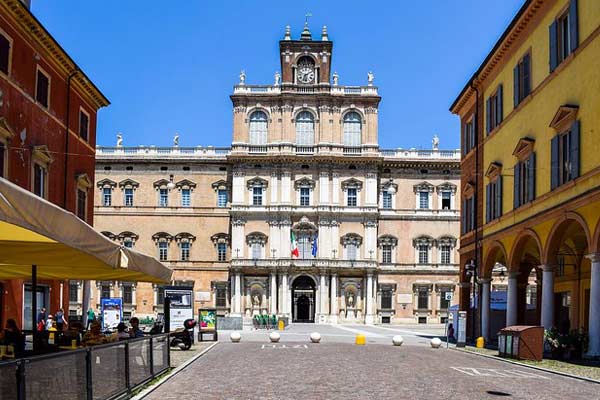 Modena is one of the most underrated cities in Italy. Its classy historic center packs a cultural punch with its monuments, museums, art, and entertainment.

Keep reading if you wonder why Unesco World Heritage in Modena comprises a not immediately  interesting Romanesque cathedral with a soaring tower and other canonical buildings around Piazza Grande.

Maybe I’m becoming a tad blasé, when it comes to Italian churches, but it is hard to impress when you are measured against St. Peter’s in Rome, Piazza dei Miracoli in Pisa, Milan Cathedral and Saint Mark’s Basilica in Venice. I’m not even sure the Cathedral in Modena would qualify for a Top10 of Italian churches by these standards, but the grey, heavy-set building with its patched up appearance has been Unesco World Heritage since 1997 which warrants a certain interest and respect. So I challenged myself to find out why the Cathedral of Modena and the surrounding piazza is considered to be of outstanding value to humanity.

It turned out to be a lot harder than first presumed, even though I had Unesco’s four criteria as an answer book.

Modena is a medium-sized city in the heart of northern Italy’s Emilia-Romagna region. Its medieval city center is among the most lovely in Italy, and its 12th-century duomo, or cathedral, is one of Italy’s best Romanesque churches. The cathedral, its Gothic bell tower called Torre della Ghirlandina, and Piazza Grande, the main square where these monuments are found make up a UNESCO World Heritage site.

Modena is the hometown of the late tenor Luciano Pavarotti and legendary carmaker Enzo Ferrari. The area is also known around the world for its balsamic vinegar and cheese production. Its rich history, gastronomic traditions and links to sports cars and opera music mean there is something for nearly everyone in this charming city in the Po River Valley. In fact, the tourist office of Modena uses as its slogan, Art, Food and Cars.

Top Things to See in Modena

Overshadowed by powerhouse destinations like Rome and Florence, Modena flies under most travelers’ radars. But given that this northern city is the birthplace of many Italian icons — from balsamic vinegar to Ferrari cars to famed tenor Luciano Pavarotti — there’s no shortage of cultural and culinary riches to discover.

Thanks to its star turn in the most recent season of comedian Aziz Ansari’s Netflix show, “Master of None,” Modena is beginning to see some recognition. With picturesque cobblestone streets and many culinary delights, the UNESCO World Heritage site is ripe for discovery. Here’s some of the best Modena — and its home region, Emilia-Romagna — has to offer.

From learning the ancient arts of pasta making, gelato wielding and balsamic vinegar maturing to diving into the history of Modena and Bologna, the Italian region of Emilia Romagna offered a wide range of wonderful things to do as a family. Here are a few of our favourites…

1. STAY IN THE HEART OF BOLOGNA

Positioned at the Art Hotel of Bologna, we couldn’t get closer to the centre of Bologna if we tried. Right in the Piazza Maggiore, we opened our windows at night to hear saxophonists playing sweet melodies for restaurant visitors and looked over rows of red-tiled roofs past blue shutters by day. Located in one of Italy’s most beautiful squares, The Art Hotel Orologio is the perfect, elegant base from which to explore the city, it’s rich history, the wealth of ancient buildings and monuments.

Sara Scarpa spends a weekend in Modena, a city primarily famous for performance cars and the world’s best vinegar, but one that has much more to offer besides…

After wandering along the cobbled streets in the centre of Modena, we finally reach a small, dark square with a few tables lit by a tall lamp. The place is empty and very quiet; the only noises we can hear are distant voices from the nearby thoroughfare of Corso Canalchiaro.

We look across the small square towards the only lit building and through the window we can see a woman working in the kitchen. We check the name on the sign above the door to confirm that we are in the right place: La Frasca, a restaurant recommended to us by not one but three locals.

Modena is not the heavenly place Aziz Ansari showed you, but it’s not very far from that either.

So you just watched Aziz Ansari’s Master of None second season on Netflix, and you’ve been wondering about Modena, the Italian city where the first two episodes are set. If you liked what you saw and you want to know something more about the streets and the monuments, the bars and restaurants in Modena, this is for you. You will also read about the many stereotypes about Italy and Italians, so popular in the United States and frequent in those two episodes of Master of None. Well, let us start from this: you will not find in Modena most of the things you saw, and no one really says «mamma-mia».

Hate to break it to you, but you aren’t the only one who’s noticed that flights to Italy are almost cheaper than flights across the US right now. Don’t not go — go! — but understand that top dogs like Rome, Venice, and Florence will be even more zoo-like than in years past. Bucket list cities the lot of them, but Italy’s unforgettable food, favorable climate, and historical badassery span across the boot.

So book that cheap-ass flight to Rome, throw your coin in the Trevi Fountain, then get the heck out of Dodge. These oft-overlooked locales are all worthwhile destinations in their own rights, and won’t be teeming with quite so many, yugh, people.

The hub of Italian automaking also boasts the best restaurant in Europe.

Foodie food·ie \ˈfü-dē\: a person with a particular interest in food; a gourmet…

How did I, an admitted non-foodie, get myself mixed up with a blog tour all about cuisine? Just lucky, I guess.

The tour, sponsored by The Emilia Romagna Region Tourist Board in collaboration with Michelin Guide Italian Restaurants 2017, was an eye-opening romp through a region considered one of the great food meccas of the world.

I wanted to share with readers some of the highlights of the journey, including things to do, what/where to eat, and places to sleep in Emilia Romagna, the bountiful valley of food.