The Bhimbetka rock shelters in Madhya Pradesh was discovered quite unintentionally but has slowly grown in significance over time. India is home to the sixth largest number of World Heritage Sites in the world and while you may not be able to travel now, you can marvel at the pictures of these magnificent places.

The cultural wing of the RSS, Sanskar Bharati, plans 100 heritage walks in honour of Wakankar. Government-run cultural institutions like Lalit Kala Akademi have scheduled year-long programmes in his honour. World Heritage Day is celebrated across the globe with the aim of encouraging local communities and individuals to consider the importance of cultural heritage in their lives.

Take a Walk Into The Past With Bhimbetka Rock Shelter in Madhya Pradesh; Charu Chowdhary; India.com 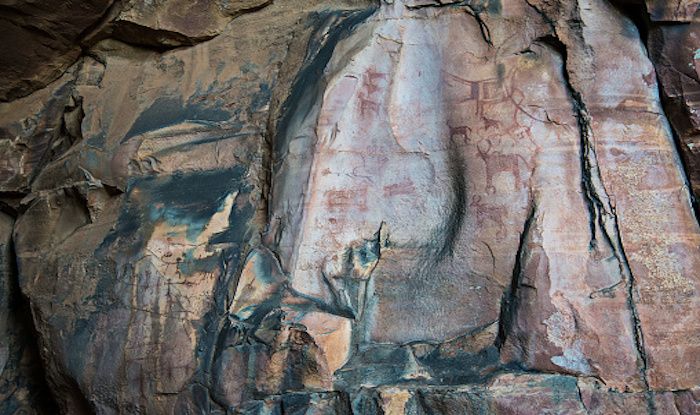 Bhimbetka Rock Shelter is One of India’s Best Archaeological Treasures…

Source: Take a Walk Into The Past With Bhimbetka Rock Shelter in Madhya Pradesh

India Is Home To 36 UNESCO World Heritage Sites. How Many Of These Did You Know?; Srishti Magan; Scoopwhoop 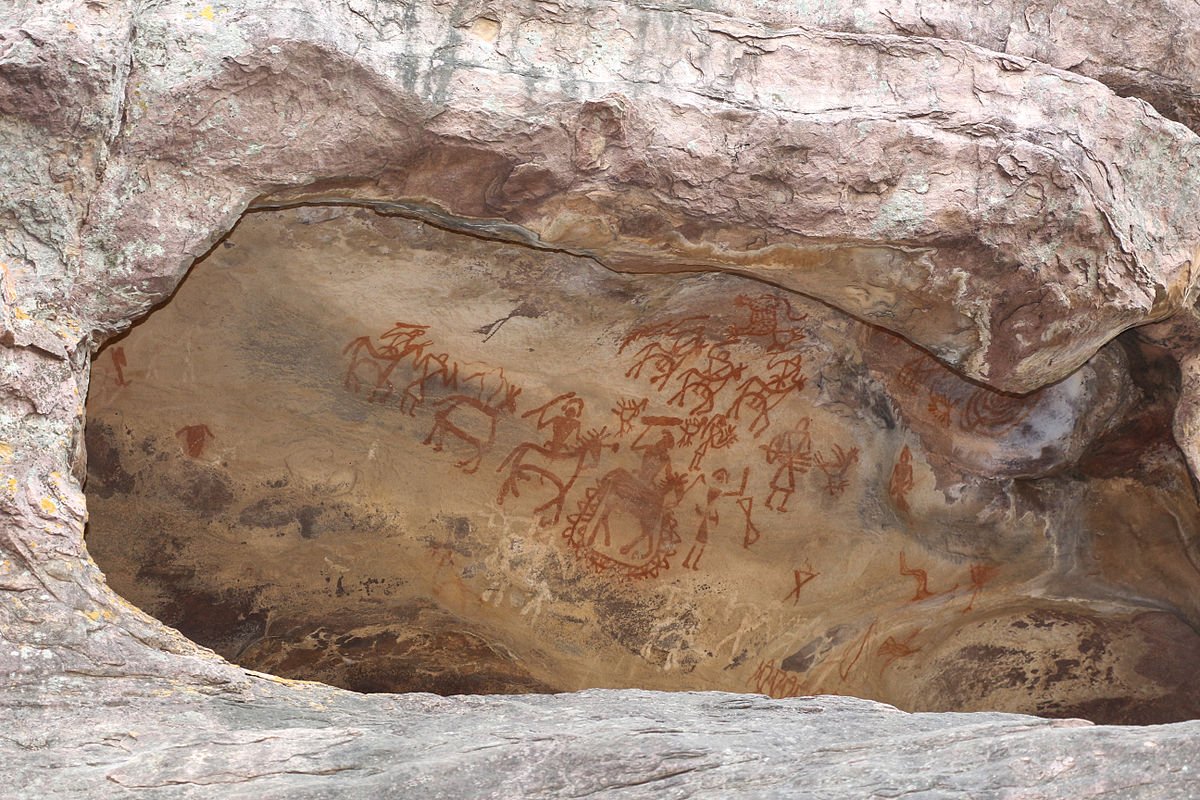 India is home to 36 world heritage sites, as designated by UNESCO, and each of them is a representation of India’s rich natural, cultural and architectural diversity:

Why: Because of its unique natural environment that’s home to the largest concentration of one-horned rhinoceros.

Why: Home to 22 of India’s most endangered mammals including tiger, pygmy hog, clouded leopard and sloth bear.

Why: One of the earliest temple constructions, and the place of enlightenment of Gautam Buddha.

Why: Architectural innovation, including creation of Char-Bagh inspired by the description of paradise in Holy Quran.

Why: For its unique representation of the Islamic architectural and artistic excellence.

Why: For innovative planning arrangements and architectural style, and being a symbol of Mughal power. Also houses the beautiful Moti Masjid.

Read more from source: India Is Home To 36 UNESCO World Heritage Sites. How Many Of These Did You Know?

Welcome to the Stone Age version of the Louvre.

Walking through Bhimbetka Rock Shelters is like walking in a Stone Age version of the Louvre. It is the largest repository of prehistoric art in India, and also the only which is a UNESCO World Heritage site. Out of an estimated 750 rock shelters, over 400 are adorned with paintings, and 15 of the best have been made accessible to tourists via walkways and signposting.

Although most of the art is between six to nine thousand years old, archaeological researchers think that the site was in use as early as 100,000 BC, well before the art of painting evolved. The most current artwork seen here dates to 400 years ago and is comparatively modern, showing kings on horseback, and sword- and shield-wielding soldiers. From that time the caves were forgotten, until everything was rediscovered by Indian archaeologists in 1957. The first archaeological dig was only in 1971.

The artwork here tells stories and provides a window into the lives of prehistoric men: there’s hunting, dancing, royal processions, the drawings are spellbinding and thought-provoking in equal measure.

Source: Video: Walking into the Past in Madhya Pradesh’s Bhimbetka Rock Shelters

Winter is perhaps the best time to travel in India. It is when you no longer feel the wrath of summer heat so it is easier to go sight-seeing and explore those hidden corners of all your favorite destinations. Many places in the country become beautiful bounties of nature during winter. Misty landscapes, breathtaking hillocks, marvelous lakes and rivers and stunning beaches are what await you all over India during the winter season. One of the best states to visit during this season is Madhya Pradesh. It is home to some amazing temples, lovely wildlife sanctuaries and historical sites that are perfect to be explored during the winter season.

Madhya Pradesh is full of hidden gems that make for great offbeat getaways. If you are bored of the cliched holiday destinations and are looking for unusual places to visit that not many tourists have heard of, check out these offbeat places in Madhya Pradesh.

Located right at the center of the country, the geographical location of Madhya Pradesh is just one of the reasons for its sobriquet of ‘The Heart of Incredible India’. This beautiful state is home to some of the finest destinations of the country that have preserved themselves across major eras of Indian history. The culture of Madhya Pradesh combined with its historic sites make it one of the best places to get a true taste of India.

The UNESCO World Heritage Site of Rock Shelters, the Bhimbetka, is a pleasant delight. It is absolute fun to walk the rugged path of rocks showing beautiful depictions of painting from the pre-historic times. The rocky terrain is full of sights of craggy cliffs and lofty mountains surrounding you. Besides, you learn, how early humans interacted with nature, animals, and shared their social life expression in raw fashion by using colors on rocks.

Nestled among the Vindhyachal ranges of Madhya Pradesh is Bhimbetka, a UNESCO World Heritage Site. After a drive surrounded by lush greenery of dense forests is this rocky terrain with natural cliffs and soft rocks display.

It has archaeological records dating back to the end term of the 18th century and was completely discovered in 1947. It was noted to be a Buddhist site earlier by the local adivasis.

There are such 35 sites in India (like Taj Mahal, Qutab Minar, Humayun’s Tomb). But these sites we are just about to reveal are the ones that you can’t even think of it being a UNESCO’s World Heritage Site. 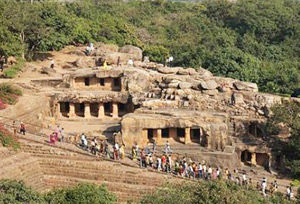 Welcome to the heart of India, Madhya, the official abode of the Maharajas and their majestic palaces. There is no state in India that is as diverse in terms of magnificent fort and palaces as Madhya Pradesh. Madhya Pradesh’s trove of culture, traditions, music and dance can be easily through its monuments. Madhya Pradesh is a must-see state of India, brimming with startling, thought-provoking and, ultimately, unforgettable attractions.

Besides Bhimbetka, other rich rock art shelters in the state do not enjoy similar protection. Foreign and Indian experts have now shown interest in studying rock art with advance research tools.

Over the years explorers and archaeologists have found rich concentration of rock art shelters at many places beyond the Bhimbetaka world heritage site in central India. Many such sites in Madhya Pradesh are now attracting attention of foreign and local experts.

Many claim that with all such finds over the decades, Madhya Pradesh has emerged as an area with one of the richest concentrations of rock art in the world. However, besides Bhimbetaka which is well protected and documented, other rich rock art shelters in the state do not enjoy similar protection and need immediate attention for their long time survival and proper scientific study.

Hyderabad: The study of rock art became popular in India after the discovery of the prehistoric Bhimbetka group of 700 rock shelters including 400 paintings, 45 kms from Bhopal in Madhya Pradesh, said Mr S.S. Rangacharulu, a retired senior official of Telangana state archaeology and museums department.

Bhimbetka got the Unesco world heritage tag thanks to the late archaeologist Dr V.S. Wakankar in 1957. He established the Wakankar Indological Cultural Research Trust in Ujjain

In Telangana Dr V.V. Krishna Sastry had reported a few rock paintings and sites at Regonda and Budigepalli in Karimnagar, Kokapet near Hyderabad and Mudumala in Mahbubnagar district.

“Rock art sites are classic examples to suggest the extent to which the prehistoric man had developed the aesthetic urge in him in spite of his pre-occupation in the fight against nature,” Mr Rangacharulu said.