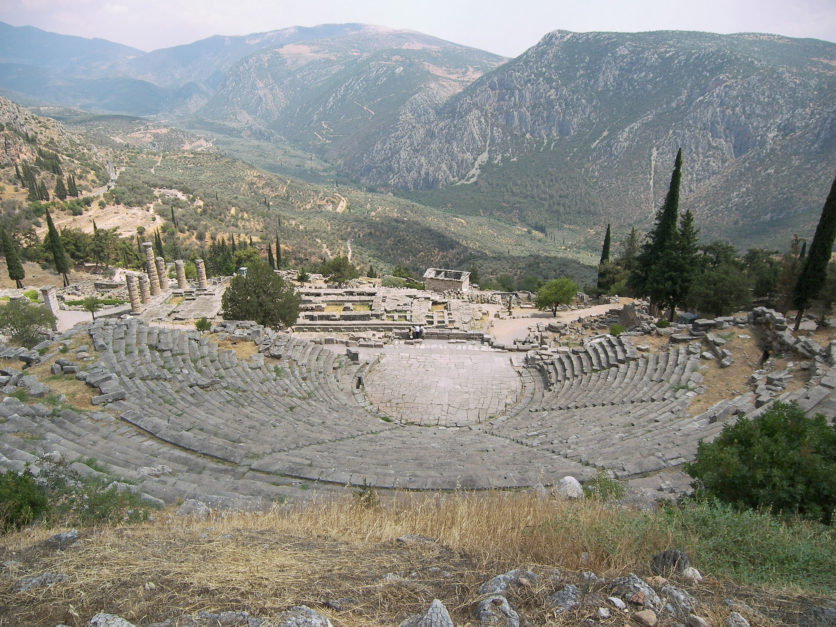 Wondering where to go in Greece? It’s a huge task deciding what the best places to visit in Greece are but these places are a good start.

Source: 15 of the Best Places to Visit in Greece 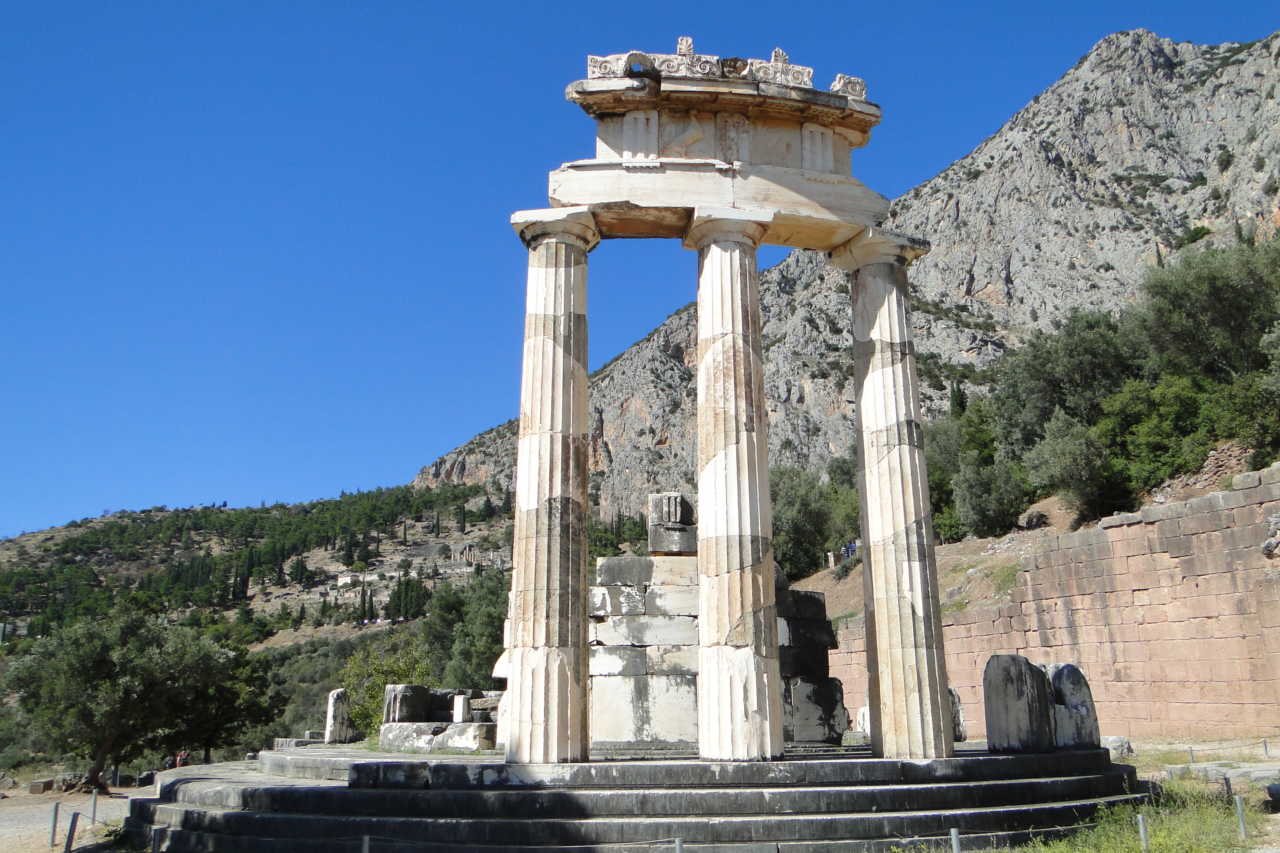 “Admire oracles” (Χρησμοὺς θαύμαζε) was one of the 147 maxims carved on temples and other structures in the holy city of Delphi.

Central Greece: The Region that Has it All; The National Herald

The National Herald had the pleasure of speaking with the Governor of the Prefecture of Evia, Evrytania, Viotia, Fokida, and Fthiotida about the various regions…

Source: Central Greece: The Region that Has it All – The National Herald

Olive Oil Symposium at the center of the ancient world in Delphi; Lisa Radinovsky; Tornos News 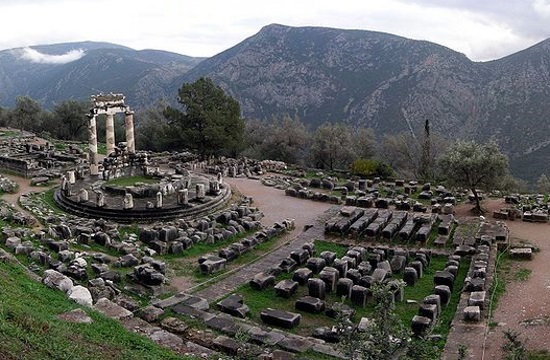 In Delphi, the ancient Greeks’ center of the world, more than 100 experts, professionals, and enthusiasts from seven countries gathered at the 2nd…

Source: Olive Oil Symposium at the center of the ancient world in Delphi | TornosNews.gr Looking for something to do after visiting Athens ? Go visit ancient Delphi : one of the most important archeological sites in all of Greece!

More Than Islands: Visit Greece For Culture, History, And Stunning Landscape; Sarah; Point Me to the Plane Greece: the center of an ancient civilisation, home to a sprawling city rife with…

Source: More Than Islands: Visit Greece For Culture, History, And Stunning Landscapes – Point Me to the Plane

The most amazing tourist destinations in Greece; Robert Parker; The Frisky

Greece has been one of the biggest tourist destinations in Europe since the old times. It is known for its rich culture and history, 18 UNESCO World Heritage Sites, as well its long and beautiful…

Source: The most amazing tourist destinations in Greece

Greece is open for winter business and this is why you should go; Sarah Marshall; Irish Examiner

Avoid the crowds and enjoy the history and scenery all year round, says Sarah Marshall.

Source: Greece is open for winter business and this is why you should go

Footage of the ancient Greek site of Delphi taken by a drone has captivated the country over the last few days.

The video uploaded to YouTube by Greek drone enthusiasts Up Drone, captures the pan-Hellenic sanctuary of Delphi, where the oracle of Apollo spoke, in all its glory.

Blending harmoniously with the superb landscape and charged with sacred meaning, Delphi in the 6th century B.C. was a religious centre and symbol of unity in the ancient Greek world.

A place with a rich intangible heritage, Delphi was the centre of the world (omphalos) in the eyes of the ancient Greeks: according to myth, it was the meeting point of two eagles released by Zeus, one to the East and one in the West.

This UNESCO World Heritage site has not been altered for centuries. Any restoration projects which were undertaken were of limited scale and were carried out in accordance with the Charter of Venice provides international guidelines of preserving ancient sites.

Within the property, only an archaeological museum has been built, which is indispensable for the protection of the findings and for the adequate understanding of the sanctuary and its offerings. 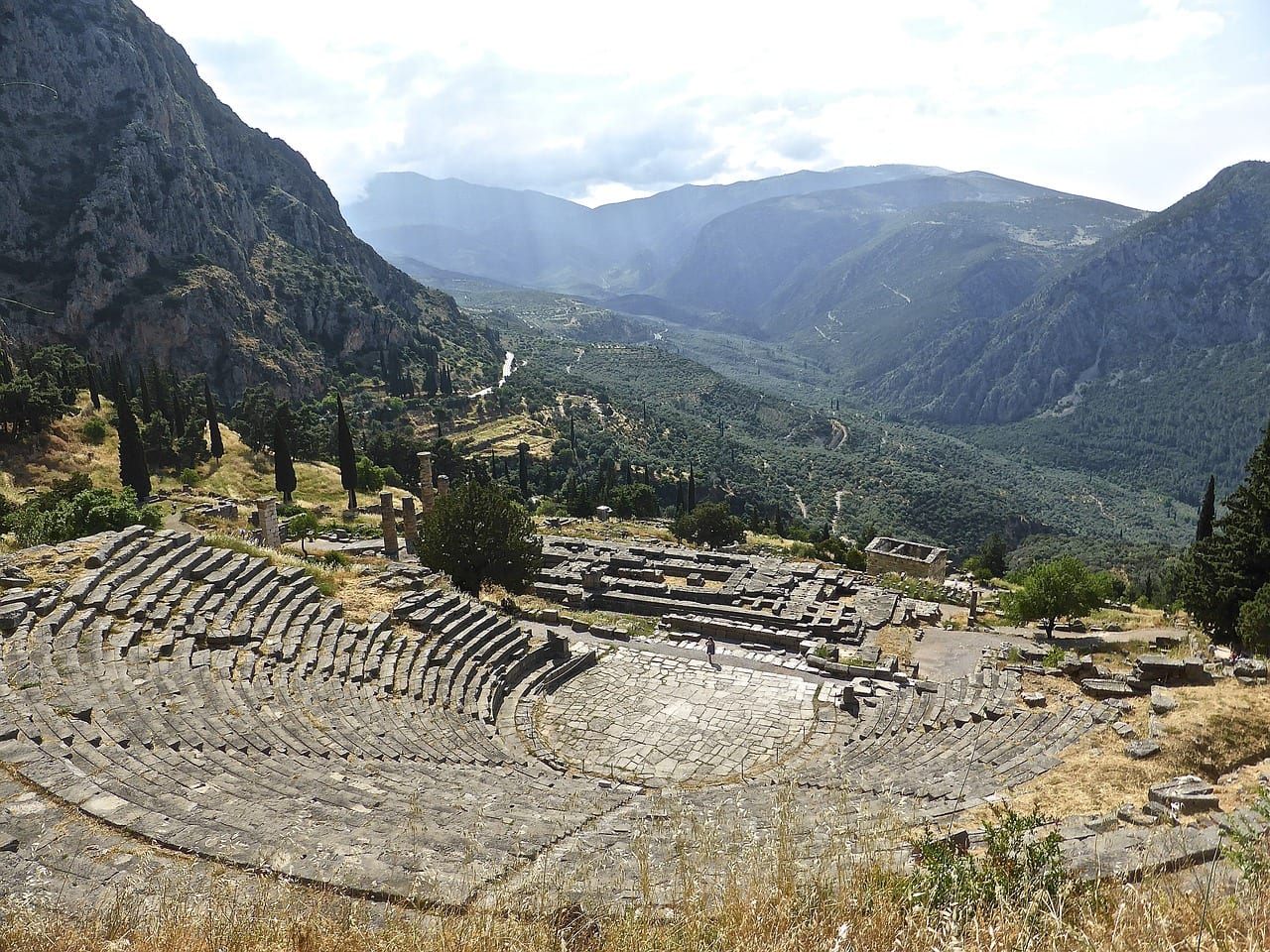 Visit the centre of the Ancient Greek world during a Delphi day trip from Athens. This magnificent UNESCO World Heritage site is a must see for anyone with a passion for history, archaeology and Greek Mythology!

If you are planning a Greek road trip, then you should definitely visit under your own steam. If you are just staying in Athens for a few days, I would suggest an organised day trip is a better option.

2018 will see the inauguration of Dolihos, another majestic Greek race covering the holy Greek ancient cites of Delfi and Olympia.

Any runner with a desire to run a long distance race in Greece has a range of choices (Athens Marathon, Spartathlon), all with historic roots, and 2018 will see the inauguration of another majestic race covering the holy Greek ancient cites of Delphi and Olympia.

The Dolihos race combines the ancient sites of Delphi and Olympia, and with a length of 255 kilometres, is even longer than its more established counterpart, the Spartathlon.

While places in the Spartathlon are always in short supply because of its international reputation, entries are still available for the Dolihos, which will take place from the 27th to 29th April. The race is set among attractive and varied scenery, with 60% on dirt roads and footpaths.

The Top 5 Mythological Getaways Across the Globe; Huffington Post 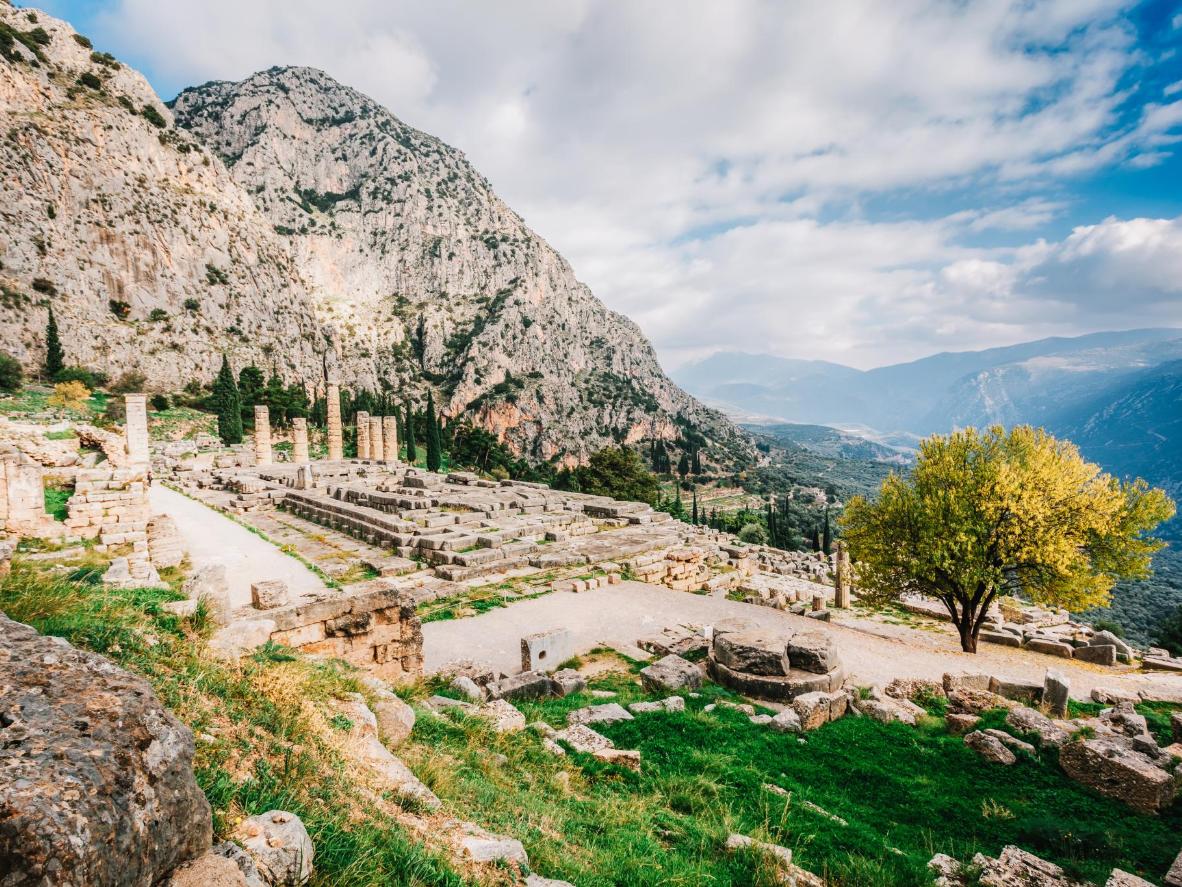 Learning about myths and legends when travelling to a new destination is always entertaining and, according to global travellers, folklore fans will love these historic destinations, all of which are steeped in their own unique mythology.

The town of Glastonbury is legendary in every sense of the word and has been dubbed the Occult Capital of England. The Glastonbury Cross was once believed to offer proof that the fabled King Arthur actually existed, with Glastonbury the site of his daring rescue of Guinevere.

Unfortunately Arthur’s connection to the area was made up by local monks in an attempt to raise funds after a fire damaged Glastonbury Abbey. But visitors can still check out Joseph of Arimathea’s perpetually-flowering walking stick (known as The Holy Thorn).

From Ancient to Modern: Top 5 Things to Do in Delphi; Alexia Amvrasi; Greece Is

Just over two hours from Athens, the ancient ‘navel of the world’ now brims with cultural gems, astounding nature and great food and shopping.

Visited throughout the year by an estimated 500,000 tourists from around the world, the UNESCO World Heritage archaeological site of Delphi is one of the most stunning in the world. Once the sanctuary of the famed Pythia – the soothsaying high priestess of Apollo – the site was once the focus of pilgrimages as few major political decisions were taken in ancient Greece without first consulting the oracle (despite the legendary ambiguity of her ‘prophecies’).

Do like the ancients and start your visit at the rotund Tholos of Athena Pronaia, where those who came to petition the Pythia first offered a sacrifice.

Delphi – the centre of the world; Times of Malta 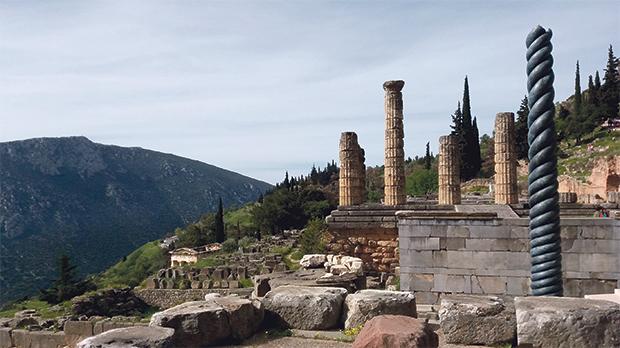 Trudging beneath the scorching sun up the steep slope connecting the Delphi Archaeological Museum to the actual archaeological site 200 metres up Mount Parnassus, Melisande Aquilinatried to convince herself that the eagle’s nest of ancient ruins she was about to admire was surely worth the effort. This was not hard to do, especially when confronted with the spectacular cliff-side panorama around her.

Nestled amidst pine forested hills and rocky crags, Delphi, which is a Unesco World Heritage, is situated on Mount Parnassus. It is a picturesque reminder of the flowering of Greek culture at its peak. It is the second most popular cultural touristic destination on the Greek mainland, after the Acropolis. The ancient sanctuary, perched on one of the largest mountainous regions of Greece, was famous for hundreds of years as the location of the supreme oracle of the ancient Mediterranean world. 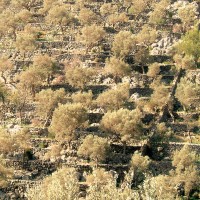 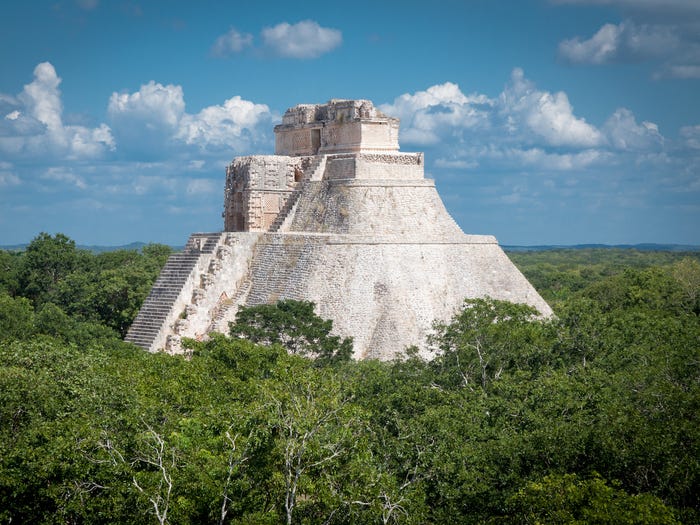