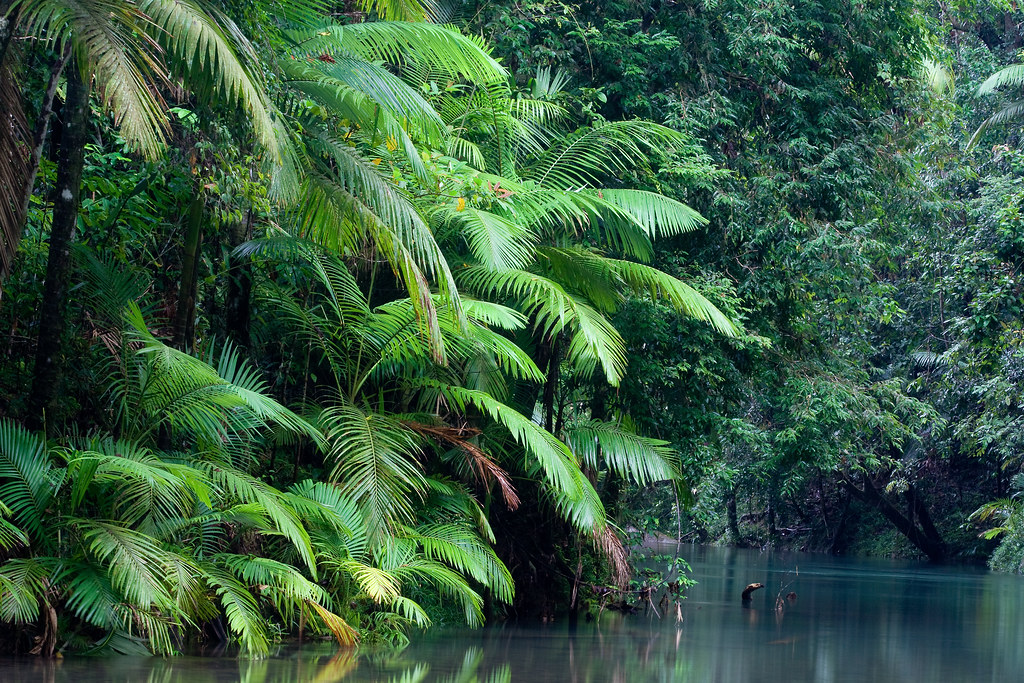 This area, which stretches along the north-east coast of Australia for some 450 km, is made up largely of tropical rainforests. This biotope offers a particularly extensive and varied array of plants, as well as marsupials and singing birds, along with other rare and endangered animals and plant species. 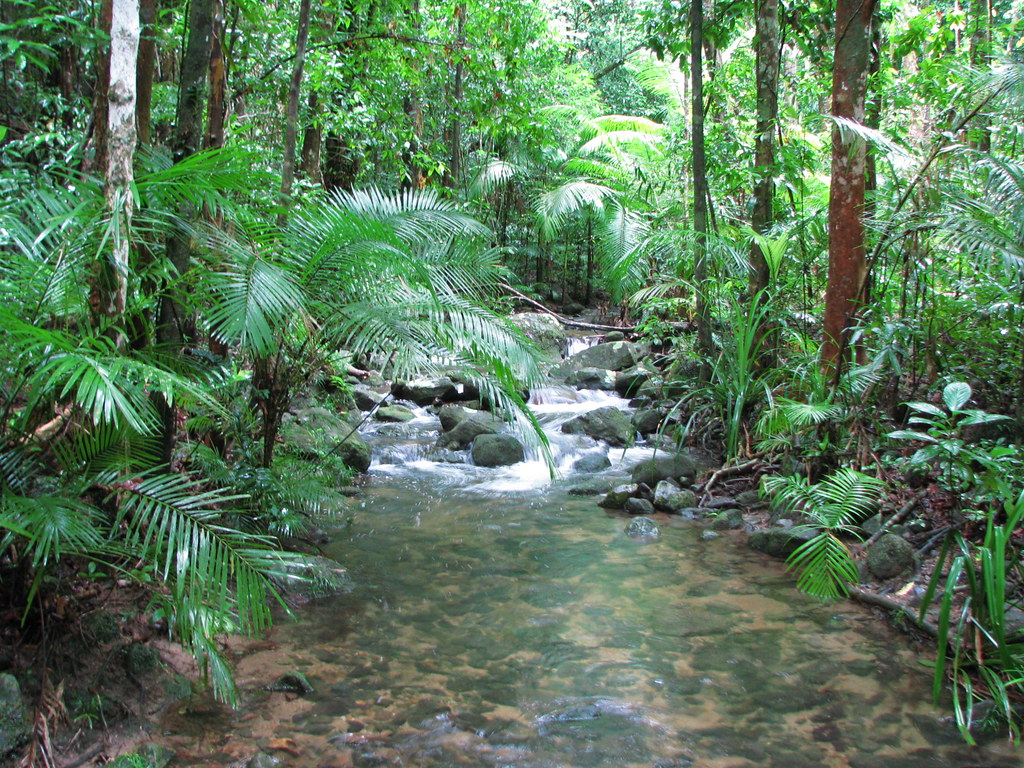 The Wet Tropics of Queensland, or Wet Tropics, stretches along the northeast coast of Australia for some 450 kilometres. Encompassing some 894,420 hectares of mostly tropical rainforest, this stunningly beautiful area is extremely important for its rich and unique biodiversity. It also presents an unparalleled record of the ecological and evolutionary processes that shaped the flora and fauna of Australia, containing the relicts of the great Gondwanan forest that covered Australia and part of Antarctica 50 to 100 million years ago. All of Australia’s unique marsupials and most of its other animals originated in rainforest ecosystems, and their closest surviving relatives occur in the Wet Tropics. These living relicts of the Gondwanan era and their subsequent diversification provide unique insights to the process of evolution in general. They also provide important information for the interpretation of fossils of plants and animals found elsewhere in Australia, and about the evolution of Australia’s sclerophyll flora and marsupial fauna in particular.

The property supports tropical rainforests at their latitudinal and climatic limits, and unlike most other seasonal tropical evergreen equatorial forests, is subject to a dry season and to frequent cyclonic events. Many of the distinct features of the Wet Tropics relate to its extremely high but seasonal rainfall, diverse terrain and steep environmental gradients. In addition to its complex array of species and life forms, the Wet Tropics is also recognised as an area possessing outstanding scenic features, natural beauty and magnificent sweeping landscapes.

Criterion (viii): The Wet Tropics contains one of the most complete and diverse living records of the major stages in the evolution of land plants, from the very first pteridophytes more than 200 million years ago to the evolution of seed-producing plants including the cone-bearing cycads and southern conifers (gymnosperms), followed by the flowering plants (angiosperms). As the Wet Tropics is the largest part of the entire Australasian region where rainforests have persisted continuously since Gondwanan times, its living flora, with the highest concentration of primitive, archaic and relict taxa known, is the closest modern-day counterpart for Gondwanan forests. In addition, all of Australia’s unique marsupials and most of its other animals originated in rainforest ecosystems, and the Wet Tropics still contains many of their closest surviving members. This makes it one of the most important living records of the history of marsupials as well as of songbirds.

Criterion (ix): The Wet Tropics provides outstanding examples of significant ongoing ecological processes and biological evolution. As a centre of endemism for the region (second only to New Caledonia in the number of endemic genera per unit area), the Wet Tropics provides fundamental insights into evolutionary patterns both in isolation from and in interaction with other rainforests. Its tall, open forests on the drier western margins of the rainforest are also significant as part of an evolutionary continuum of rainforest and sclerophyll forests. Eucalypts, that now dominate the Australian landscape, are considered to have evolved from such rainforest stock and radiated into drier environments from the margins of closed forests.

The area supports an exceptionally high level of diversity of both flora and fauna, with over 3,000 vascular plant species in 224 families, of which 576 species and 44 genera are endemic, including two endemic plant families. Vertebrate diversity and endemism are also very high, with 107 mammal species including 11 endemic species and two monotypic endemic genera. In terms of avifauna, there are 368 bird species, of which 11 species are endemic. For reptiles, there are 113 species of which 24 species are endemic, including three monotypic endemic genera. The diversity of amphibians includes 51 species of which 22 are endemic.

Criterion (x): The Wet Tropics holds a largely intact flora and fauna with hundreds of endemic species restricted to the property, of which many are classified as threatened. The majority of plant species have restricted distributions, and many monotypic plant genera and several species of marsupials, frogs and reptiles have very restricted distributions either as isolated or disjunct populations, reflecting the refugial nature of the rainforests found in several locations. The diversity of the plant communities and animal habitats of the Wet Tropics is recognised as being the most floristically and structurally diverse in Australia and is also outstanding on a global scale. Among many emblematic species occurring in the property is the flightless Australian cassowary, one of the largest birds in the world.

Although the Wet Tropics is predominantly wet tropical rainforest, it is fringed and in a few places dissected by sclerophyll forests, woodlands, swamps and mangrove forests, adding to its diversity.

Cairns is touted as the “gateway to the Great Barrier Reef” and other destinations such as Kuranda and the Daintree rainforest in Far North Queensland, Australia, although the city itself has little to offer to travelers besides tour agencies, a handful of restaurants, cafes, and backpacker bars, and a long walk along the espalade looking out at the swampy shoreline. Its 150,000 residents are regularly outnumbered by domestic and international visitors. The Cairns area was historically inhabited by the indigenous Walubarra Yidinji people. Mapped by James Cook and named Trinity Bay in 1770, it was officially founded in 1876 as an export port for gold and renamed after the then-Governor of Queensland. Commonly mispronounced as cans, the actual pronunciation of Cairns is somewhat closer to kare-nz, with a non-silent “r”. The main industry is tourism, with focus on the European, Japanese and increasingly Chinese markets. [read more]

Townsville is a laid-back coastal city of around 200,000 people in Far North Queensland, Australia. Townsville is on the coast and enjoys an average of 320 days of sunshine a year. It is an appealing place for locals and a great jumping off point for visitors, especially to Magnetic Island which is only 25-45 minutes by passenger or car ferry. A great spot for visitors wanting a taste of outback Australia while not venturing far from the coast. It offers a quiet cosmopolitan feel with its good choice of restaurants & bars but also has a relaxing siesta style during the hottest parts of the day in high summer. Townsville takes great pride in being the unofficial Capital of North Queensland. The Sunbus bus route operates 7 days a week with 7 main lines going around the town. [read more]

Ayr is a small town in Far North Queensland, Australia. The town has a population of about 8000 and is a major centre for growing sugar cane, mangoes and vegetables. This is helped by the good water supply in the area. The town attracts people with working holiday visas between March and December to work on harvests. Ayr is an hour’s drive south of Townsville which has flights to Sydney, Brisbane, and Melbourne. Highway 1 then goes south to Mackay, Rockhampton, and Brisbane. Ayr is on the North Coast railway line, which links Brisbane with Townsville and Cairns. Ayr is 1,260km from Brisbane. Trains from Brisbane run 5 days per week leaving around 15:45 and arrive at 08:00 the following day. Trains from Cairns run 5 days per week, departing around 09:00 and arrive at 16:20 the same day. See Alva Beach (Lynch’s Beach) (17km from Ayr). Historic buildings in the town centre [read more].