The landscape in this park, situated in south-west New Zealand, has been shaped by successive glaciations into fjords, rocky coasts, towering cliffs, lakes and waterfalls. Two-thirds of the park is covered with southern beech and podocarps, some of which are over 800 years old. The kea, the only alpine parrot in the world, lives in the park, as does the rare and endangered takahe, a large flightless bird. 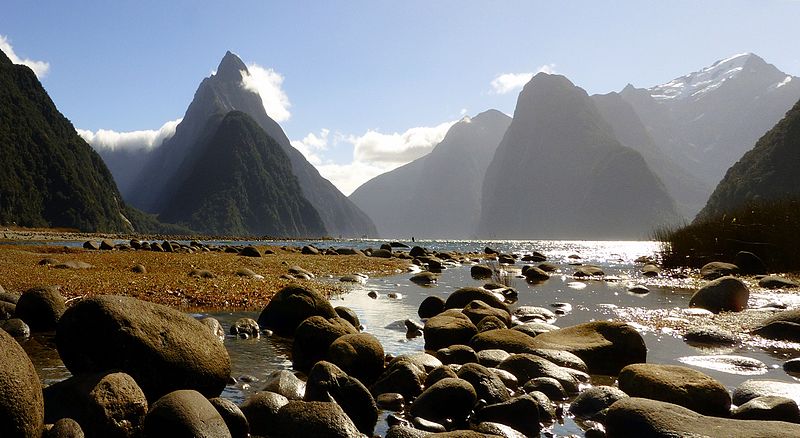 Located in the south-west corner of New Zealand’s’ South Island, Te Wähipounamu – South West New Zealand covers 10% of New Zeland’s landmass (2.6 million hectares) and is spread over a 450km strip extending inland 40 – 90km from the Tasman Sea. The property exhibits many classic examples of the tectonic, climatic, and glacial processes that have shaped the earth. The great Alpine Fault divides the region and marks the contact zone of the Indo-Australian and Pacific continental plates making it one of only three segments of the world’s major plate boundaries on land. Collision between the two tectonic plates constructs the main mountain range, known as the Southern Alps/Kä Tiritiri o te Moana, which rise to nearly 4 000m altitude within a mere 30km from the sea.

Overwhelmingly a mountainous wilderness, including significant piedmont surfaces in the north-west glaciation, both historic and modern, is a dominant landscape feature. Spectacular landforms include: the 15 fiords which deeply indent the Fiordland coastline; a sequence of 13 forested marine terraces progressively uplifted more than 1000m along the Waitutu coastline over the past million years; a series of large lake-filled glacial troughs along the south-eastern margin; the Franz Josef and Fox Glaciers which descend into temperate rainforest; and spectacular moraines of ultramafic rock extending to the Tasman coastline.

As the largest and least modified area of New Zealand’s natural ecosystems, the flora and fauna has become the world’s best intact modern representation of the ancient biota of Gondwana. The distribution of these plants and animals is inextricably linked to the dynamic nature of the physical processes at work in the property. The region contains outstanding examples of plant succession after glaciation, with sequences along altitudinal (sea level to permanent snowline), latitudinal (wet west to the dry east), and chronological gradients (fresh post-glacial surfaces to old Pleistocene moraines).

It is the combination of geological and climatic processes, the resultant landforms, the unique biota displaying evolutionary adaptation over a diverse range of climatic and altitudinal gradients, all in a relatively pristine state, that give Te Wähipounamu – South West New Zealand its exceptional and outstanding natural characteristics.

Criterion (vii): Te Wähipounamu – South West New Zealand contains many of the natural features which contribute to New Zealand’s international reputation for superlative landscapes: its highest mountains, longest glaciers, tallest forests, wildest rivers and gorges, most rugged coastlines and deepest fiords and lakes, as well as the remnant of an extinct volcano in Solander Island. The temperate rainforests of the property are unmatched in their composition, extent and intactness by any such forests anywhere in the world.

From the vast wilderness of Fiordland in the south to the spectacular upthrust of the Southern Alps in the north, the landscapes are world class for the sheer excellence of their scenic beauty. It is an area of magnificent primeval vistas: snow-capped mountains, glaciers, forests, tussock grasslands, lakes, rivers, wetlands and over 1000km of wilderness coastline. Only traces of human influence are evident and then mainly in peripheral areas.

Criterion (viii): Te Wähipounamu – South West New Zealand is considered to be the best modern example of the primitive taxa of Gondwanaland seen in modern ecosystems – and as such the property is of global significance. The progressive break-up of the southern super-continent of Gondwanaland is considered one of the most important events in the earth’s evolutionary history. New Zealand’s separation before the appearance of marsupials and other mammals, and its long isolation since, were key factors enabling the survival of the ancient Gondwanan biota on the islands of New Zealand to a greater degree than elsewhere.  The living representatives of this ancient biota include flightless kiwis, carnivorous land snails, 14 species of podocarp and genera or beech.

The South West is also an outstanding example of the impact of the Pleistocene epoch of earth history. Ice-carved landforms created by these “Ice Age” glaciers dominate the mountain lands, and are especially well-preserved in the harder, plutonic igneous rocks of Fiordland. Glacier-cut fiords, lakes, deep U-shaped valleys, hanging valleys, cirques, and ice-shorn spurs are graphic illustrations of the powerful influence of these glaciers on the landscape. Depositional landforms of Pleistocene glacial origin are also important, especially in Westland, west of the Alpine Fault. Chronological sequences of outwash gravels, and moraine ridges in elegant curves and loops, outline the shapes of both former piedmont glaciers and Holocene “post-glacial” valley glaciers.

Criterion (ix): A continuum of largely unmodified habitats, the property exhibits a high degree of geodiversity and biodiversity. Fresh-water, temperate rainforest and alpine ecosystems are all outstandingly well represented over an extensive array of landforms and across wide climatic and altitudinal gradients. Notable examples of on-going biological processes can be found in the large expanses of temperate rainforest, the plant succession after glacial retreat, soil/plant chronosequences on beach ridges, plant succession on alluvial terraces, vegetation gradients around the margins of glacial lakes and ecotypic differentiation of plants on ultramafic soils. The extensive and little modified freshwater habitats, the  impressive diversity of alpine ecosystems, extensive alpine plant endemism, and on-going evolution associated with long-standing geographical isolation of animal populations, like the kiwi taxa of South-Westland, are further examples of on-going biological evolution.

While there is little permanent physical evidence of past human interaction with the natural environment, tangata whenua (the indigenous people who have customary authority in a place) have long associations with the area which was significant to them for natural resources, particularly pounamu (nephrite). European associations are more recent and initially based on natural resource exploitation. The predominant human uses today are associated with sustainable tourism.

Criterion (x): The habitats of Te Wähipounamu contain an extensive range of New Zealand’s unusual endemic fauna, a fauna which reflects its long evolutionary isolation and absence of mammalian predators. The property contains the entire wild population of the rare and endangered takahë (Notornis mantelli), the entire population of the South Island subspecies of brown kiwi (Apteryx australis), New Zealands rarest Kiwi, the rowi (Apteryx rowi), the only significant remaining populations of the seriously declining mohua / yellowhead (Mohoua ochrocephala), the only large populations remaining of käkä and käkäriki / yellow-crowned parakeet, the only remaining population of pateke / Fiordland brown teal in the South Island.

The world’s rarest and heaviest parrot, käkäpö (Strigops habroptilus) survived in Fiordland until the early 1980s. It is now thought to be extinct on the mainland and its survival depends on careful management of a limited number of offshore island populations.

Queenstown (Māori: Tāhuna) is a world renowned resort town in the South Island of New Zealand. The town sits on the edge of Lake Wakatipu and is surrounded by the Southern Alps. What was once a small, remote, South Island town has transitioned since the 1980s, first to a busy ski destination, and now to a year-round tourist mecca and centre for adventure tourism. It is a world-famous destination attracting around 1.9 million visitors every year, undoubtedly the tourism capital of the South Island if not New Zealand, and a must-see stop for most visitors to New Zealand. Situated on the shores of Lake Wakatipu, New Zealand’s third-largest lake (291 km2 or 112 sq mi) and one of Otago and New Zealand’s most scenic lakes, surrounded by mountains, it’s not hard to see why its stunning scenery draws people here year round. Queenstown happily caters for all visitors with a full range of attractions, activities, accommodation and eating options for any budget, from backpackers to five-star luxury [read more].

Invercargill, the most southerly city in New Zealand, was built in the late 19th and early 20th century, and its wide streets and century old buildings give the visitor a unique feeling of stepping back in time to when business was conducted in a more sedate and considered manner and the streets were (figuratively) paved with Central Otago gold. Invercargill is the main centre of the Southland region, and the service city for the farms of the fertile Southland plains. It is also the most westerly city in New Zealand, due to the South Island’s south-west and north-east axis. Invercargill is named after William Cargill, Superintendent of Otago Province from 1853 to 1859, when Southland was part of Otago Province. Many of the central city streets are named after rivers of Scotland and northern England. Because of its southerly location, Invercargill’s a good place to view the aurora australis or Southern Lights, unless you fancy an expensive and uncomfortable sojourn on one of the New Zealand Subantarctic Islands [read more].

Christchurch (Māori: Ōtautahi) is the largest city in the South Island of New Zealand, and the third most-populous urban area in the country. As well as having the most attractions of any place in the South Island, it’s the major international entry point for visiting the rest of the island. It is on the east coast of the South Island, and is the centre of the Canterbury region. Christchurch is rebuilding after an earthquake in February 2011 that severely damaged it. The city is back in business and open to visitors – you will just encounter construction sites, roadworks and vacant land as you travel around. Christchurch has a rich English heritage. This especially shows in the older buildings, especially in the cultural precinct along Worcester Boulevard (which is open from the Avon River towards the west), where most heritage buildings remain. The Avon River flows through the central city and disrupts the regular rectangular layout of the city streets [read more].