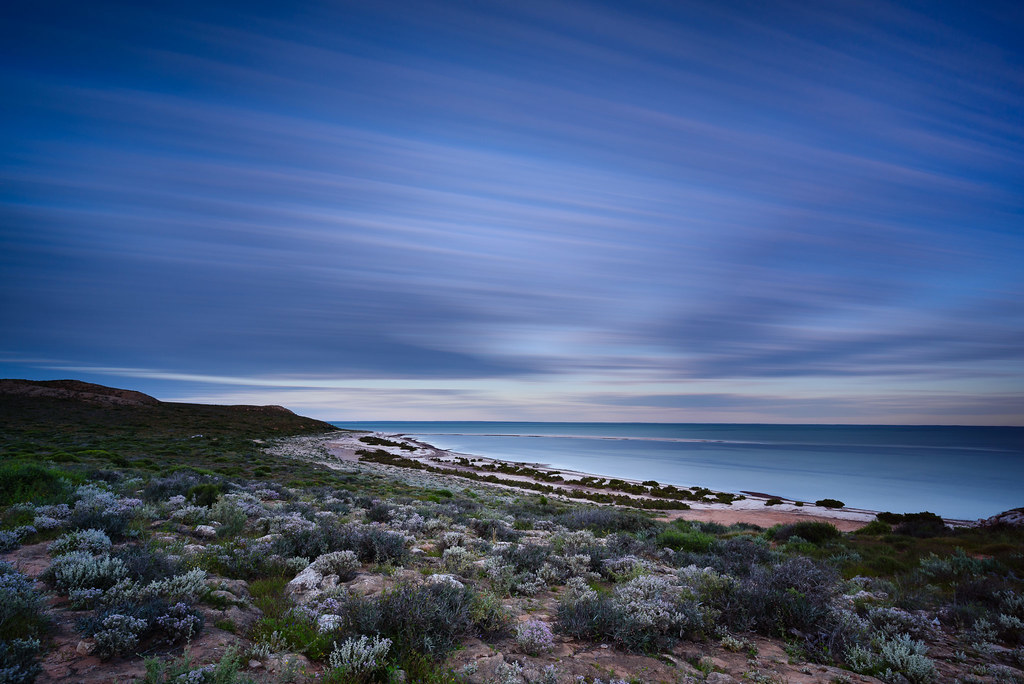 At the most westerly point of the Australian continent, Shark Bay, with its islands and the land surrounding it, has three exceptional natural features: its vast sea-grass beds, which are the largest (4,800 km2) and richest in the world; its dugong (‘sea cow’) population; and its stromatolites (colonies of algae which form hard, dome-shaped deposits and are among the oldest forms of life on earth). Shark Bay is also home to five species of endangered mammals.

On the Indian Ocean coast at the most westerly point of Australia, Shark Bay’s waters, islands and peninsulas covering a large area of some 2.2 million hectares (of which about 70% are marine waters) have a number of exceptional natural features, including one of the largest and most diverse seagrass beds in the world. However it is for its stromatolites (colonies of microbial mats that form hard, dome-shaped deposits which are said to be the oldest life forms on earth), that the property is most renowned. The property is also famous for its rich marine life including a large population of dugongs, and provides a refuge for a number of other globally threatened species.

Criterion (vii): One of the superlative natural phenomena present in this property is its stromatolites, which represent the oldest form of life on Earth and are comparable to living fossils. Shark Bay isalso one of the few marine areas in the world dominated by carbonates not associated with reef-building corals. This has led to the development of the Wooramel Seagrass Bank within Shark Bay, one of the largest seagrass meadows in the world with the most seagrass species recorded from one area. These values are supplemented by marine fauna such as dugong, dolphins, sharks, rays, turtles and fish, which occur in great numbers.

The hydrologic structure of Shark Bay, altered by the formation of the Faure Sill and a high evaporation, has produced a basin where marine waters are hypersaline (almost twice that of seawater) and contributed to extensive beaches consisting entirely of shells.  The profusion of peninsulas, islands and bays create a diversity of landscapes and exceptional coastal scenery.

Criterion (viii): Shark Bay contains, in the hypersaline Hamelin Pool, the most diverse and abundant examples of stromatolites (hard, dome-shaped structures formed by microbial mats) in the world. Analogous structures dominated marine ecosystems on Earth for more than 3,000 million years.

The stromatolites of Hamelin Pool were the first modern, living examples to be recognised that have a morphological diversity and abundance comparable to those that inhabited Proterozoic seas. As such, they are one of the world’s best examples of a living analogue for the study of the nature and evolution of the earth’s biosphere up until the early Cambrian.

The Wooramel Seagrass Bank is also of great geological interest due to the extensive deposit of limestone sands associated with the bank, formed by the precipitation of calcium carbonate from hypersaline waters.

Criterion (ix): Shark Bay provides outstanding examples of processes of biological and geomorphic evolution taking place in a largely unmodified environment. These include the evolution of the Bay’s hydrological system, the hypersaline environment of Hamelin Pool and the biological processes of ongoing speciation, succession and the creation of refugia.

One of the exceptional features of Shark Bay is the steep gradient in salinities, creating three biotic zones that have a marked effect on the distribution and abundance of marine organisms. Hypersaline conditions in Hamelin Pool have led to the development of a number of significant geological and biological features including the ‘living fossil’ stromatolites.

The unusual features of Shark Bay have also created the Wooramel Seagrass Bank. Covering 103,000 ha, it is the largest structure of its type in the world. Seagrasses are aquatic flowering plants that form meadows in near-shore brackish or marine waters in temperate and tropical regions, producing one of the world’s most productive aquatic ecosystems. Australia has one of the highest diversity of seagrasses globally, with 12 species occurring in the Bay.

Criterion (x): Shark Bay is a refuge for many globally threatened species of plants and animals. The property is located at the transition zone between two of Western Australia’s main botanical provinces, the arid Eremaean, dominated by Acacia species and the temperate South West, dominated by Eucalyptus species, and thus contains a mixture of two biotas, many at the limit of their southern or northern range. The property contains either the only or major populations of five globally threatened mammals, including the Burrowing Bettong (now classified as Near Threatened), Rufous Hare Wallaby, Banded Hare Wallaby, the Shark Bay Mouse and the Western Barred Bandicoot. A number of globally threatened plant and reptile species also occur in the terrestrial part of the property.

Shark Bay’s sheltered coves and lush seagrass beds are a haven for marine species, including Green Turtle and Loggerhead Turtle (both Endangered, and the property provides one of Australia’s most important nesting areas for this second species). Shark Bay is one of the world’s most significant and secure strongholds for the protection of Dugong, with a population of around 11,000. Increasing numbers of Humpback Whales and Southern Right Whales use Shark Bay as a migratory staging post, and a famous population of Bottlenose Dolphin lives in the Bay. Large numbers of sharks and rays are readily observed, including the Manta Ray which is now considered globally threatened.

Carnarvon is a town in the Gascoyne region of Western Australia. Once a port for the shipping of livestock, it’s now a fruit & veg growing area and has a small fishing industry. It’s the last town of any size before heading north into arid country towards Exmouth and Port Hedland, so for travellers it’s a good overnight stop and chance to stock up. Look up at the night sky especially if you come from a cold northern country where the skies are a smear of city light pollution and sleet. The moon and band of the Milky Way will be familiar but the constellations won’t be. Check online beforehand what’s likely to be in view and where: probably one of the giant planets, perhaps the International Space Station whirling west to east. The town’s sights are a little way out, within range of a hot dusty hike, but think about the coming back and then hire a car [read more].

Kalbarri is a coastal town in the Mid West region located 592 km (368 mi) north of Perth, Western Australia. The town is found at the mouth of the Murchison River and has an elevation of 6 metres (20 ft). It is connected by public transport to Perth via Transwa coach services N1 and N2. The town is geared towards tourism and fishing, with attractions including the daily pelican feeding, the Kalbarri National Park, Murchison River Gorge and the Murchison River. There are two charter boats to go on to view the Murchison River. The town attracts 200,000 tourists every year, with the population of the town swelling to 8,000 during holiday seasons. Electricity to the town and hotels is supplied by a fragile 33kV powerline from the central grid. To increase grid stability, a 5MW/2MWh grid battery is installed. The Kalbarri National Park is home to a phenomenon of geography and geology known as the Z Bend, a walking track, and “Nature’s Window”, a rock formation overlooking hundreds of kilometres of Murchison River [read more].

Geraldton is a city on the Batavia coast of Western Australia. It’s a busy port and the chief city of the Mid-West region of WA. People have lived in this area for 40,000 years, those since the time of European contact being the Yamatji or Wajarri aboriginals. In 1848 lead ore was discovered here and the area began to be built up: metal ore mining along with livestock and fishing were and remain the major industries. Geraldton was transformed in the 1960s when the Brand Highway was tarmacked all the way from Perth, so that bumpy dusty 420 km (260 miles) became one day’s easy drive. The city’s main interest to travellers is therefore as an overnight stopover, but it has a range of tourist attractions in its own right, especially water sports. Geraldton Visitor Centre is in the Bill Sewell Complex, just north of the city centre on Chapman Road. The main sights of Geraldton are fairly central, and easy to reach on foot, especially once the sea breeze gets up to offset the heat [read more].