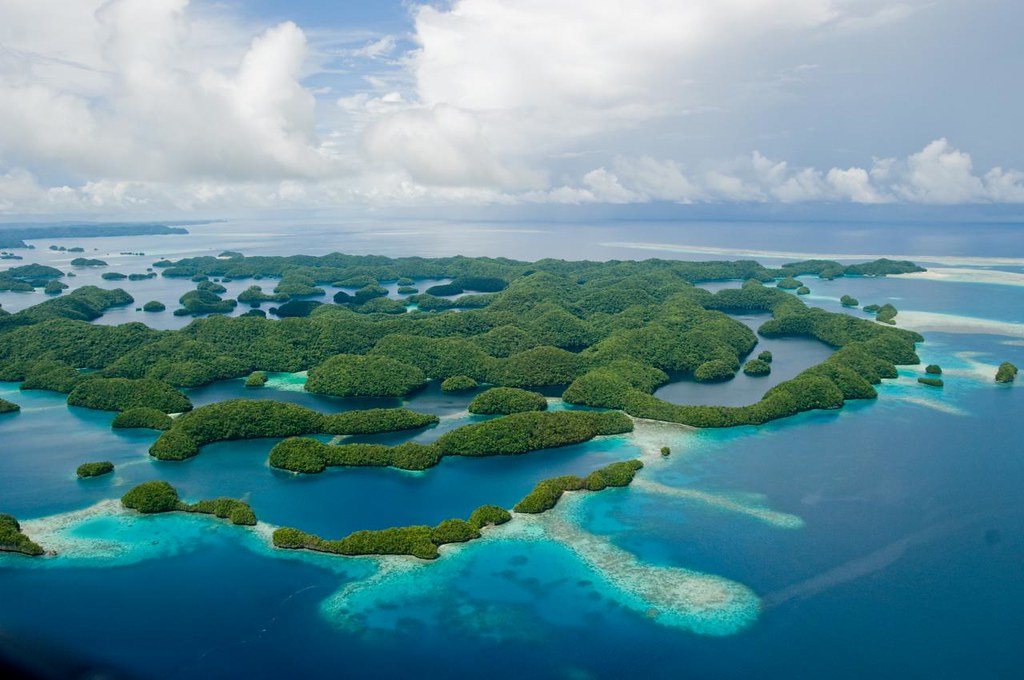 Rock Islands Southern Lagoon covers 100,200 ha and includes 445 uninhabited limestone islands of volcanic origin. Many of them display unique mushroom-like shapes in turquoise lagoons surrounded by coral reefs. The aesthetic beauty of the site is heightened by a complex reef system featuring over 385 coral species and different types of habitat. They sustain a large diversity of plants, birds and marine life including dugong and at least thirteen shark species. The site harbours the highest concentration of marine lakes anywhere, isolated bodies of seawater separated from the ocean by land barriers. They are among the islands’ distinctive features and sustain high endemism of populations which continue to yield new species discoveries. The remains of stonework villages, as well as burial sites and rock art, bear testimony to the organization of small island communities over some three millennia. The abandonment of the villages in the 17th and 18th centuries illustrates the consequences of climate change, population growth and subsistence behaviour on a society living in a marginal marine environment.

The Rock Islands Southern Lagoon consists of numerous large and small forested limestone islands, scattered within a marine lagoon protected by a barrier reef. The property lies within Koror State, immediately to the south of Palau’s main volcanic island Babeldaob in the western Pacific Ocean.

The marine site covers 100,200 ha and is characterized by coral reefs and a diversity of other marine habitats, as well as 445 coralline limestone islands uplifted due to volcanism and shaped over time by weather, wind and vegetation. This has created an extremely high habitat complexity, including the highest concentration of marine lakes in the world, which continue to yield new species discoveries. The terrestrial environment is lush and at the same time harsh, supporting numerous endemic and endangered species. Although presently uninhabited, the islands were once home to Palauan settlements, and Palauans continue to use the area and its resources for cultural and recreational purposes. This is regulated through a traditional governance system that remains an important part of national identity.

The islands contain a significant set of cultural remains relating to an occupation over some five thousand years that ended in abandonment. Archaeological remains and rock art sites are found in two island clusters – Ulong and Negmelis, and on three islands – Ngeruktabel, Ngeanges, and Chomedokl.

Remains of former human occupation in caves, including rock art and burials, testifies to seasonal human occupation and use of the marine ecosystem, dating back to 3,100 BP and extending over some 2,500 years.

Permanent stone villages on a few islands, some dating back to between 950 and 500 BP, were occupied for several centuries before being abandoned in the 17th-18th centuries, when the population moved to larger islands. The villages include the remains of defensive walls, terraces and house platforms. The settlements reflect distinctive responses to their local environment and their abandonment demonstrates the consequences of population growth and climate change impacting on subsistence in a marginal environment.

The descendants of the people who moved from the Rock Islands to the main islands of Palau identify with their ancestral islands through oral traditions that record in legends, myths, dances, and proverbs, and traditional place names the land- and seascape of their former homes.

The abandoned islands now provide an exceptional illustration of the way of life of small island communities over more than three millennia and their dependence on marine resources. They also are seen as ancestral realms by the descendants of those who migrated to the main island of Palau and this link is kept alive through oral traditions.

Criterion (v): The abandonment of Rock Island villages in the 17th and 18th centuries demonstrated by the remains of human settlement and evidence of marine harvesting activity in the Rock Islands Southern Lagoon is an exceptional illustration of the intersection and consequences of climate change, population growth, and subsistence behaviour on a society living in a marginal marine environment.

Criterion (vii): The Rock Islands Southern Lagoon contains an exceptional variety of habitats within a relatively limited area. Barrier and fringing reefs, channels, tunnels, caves, arches, and coves, as well as the highest number and density of marine lakes in the world, are home to diverse and abundant marine life. The maze of dome-shaped and green Rock Islands seemingly floating in the turquoise lagoon surrounded by coral reef is of exceptional aesthetic beauty.

Criterion (ix): The Rock Islands Southern Lagoon contains 52 marine lakes, more than at any other site in the world. Furthermore, the marine lakes of the property are at different stages of geological and ecological development, ranging from lakes with high connectivity to the sea to highly isolated lakes with notably different species composition, including unique and endemic species. These features represent an outstanding example of how marine ecosystems and communities develop, and make the lakes valuable as “natural laboratories” for scientific study of evolution and speciation. Five new subspecies of the Mastigias papua jellyfish have been described from these marine lakes, and new species discoveries continue to be made both in the marine lakes as well as in the complex reef habitats of the property.

Criterion (x): The Rock Islands Southern Lagoon has exceptionally high biological and marine habitat diversity. The marine lakes are unique in terms of number, the density at which they occur, and their varying physical conditions. With low fishing pressure, limited pollution and human impact, as well as an exceptional variety of reef habitat, the resilience of reefs of the property makes it a critical area for protection, including as an area important for climate change adaptation of reef biota, and potentially as a source of larvae for reefs in the region. All the endangered megafauna of Palau, 746 species of fish, over 385 species of corals, at least 13 species of sharks and manta rays, 7 species of giant clams, and the endemic nautilus are found in the property, and the forests of the islands include all of Palau’s endemic birds, mammals, herpetofauna and nearly half of Palau’s endemic plants. This makes the area of exceptional conservation value.

Koror, population 10,000, is the largest city in Palau. Koror was also the capital until 2006, but the hamlet of Melekeok, some 20 km away, now has that honor. Home to half of the country’s population, it’s no surprise that Koror has the largest concentration of different services, for visitors this includes shops, diving operators, and places to eat and sleep. Like other capitals of small island nations, the city is rather utilitarian and doesn’t have that many attractions. The climate is tropical; warm or hot around the year with a lot of rain. The first couple of months of the year are a bit drier, whereas July to October is the rainiest part of the year. Palau has been inhabited by people from Southeast Maritime Asia for several millenia and the first Europeans to reach the islands were the Spanish. The islands were parts of Spanish East Indies for centuries but present-day Koror remained a small fishing village [read more].

Airai, located on the southern coast of Babeldaob island, is the second-most populous state of Palau. It contains the country’s chief airport, Roman Tmetuchl International Airport, and is connected by the Koror-Babeldaob Bridge to nearby Koror Island. The state has an area of 44 km² (17 mi²), and a total population of 2,455 as of 2015 Census, the second largest in the country. Airai is also the name of the biggest town in the state, with a population of 920 people as of 2005. The town of Airai is the largest town in Palau outside of the state of Koror. Airai is most notable for its bai (men’s meeting house), the oldest one in existence, dating back 200 years. The turbulent rains of Palau did not treat ancient Palauan architecture kindly. Airai is more inland/mountainous-jungle and therefore more of a bedroom community of Koror. The state of Airai has an elected chief executive, governor [read more].

Peleliu (or Beliliou) is an island in the island nation of Palau. Peleliu, along with two small islands to its northeast, forms one of the sixteen states of Palau. The island is notable as the location of the Battle of Peleliu in World War II. First sighting of Peleliu, Babeldaob, and Koror recorded by Westerners was by the Spanish expedition of Ruy López de Villalobos at the end of January 1543. They were then charted as Los Arrecifes (“The Reefs” in Spanish). In November and December 1710 these three islands were again visited and explored by the Spanish missionary expedition commanded by Sargento Mayor Francisco Padilla on board of the patache Santísima Trinidad. Two years later they were explored in detail by the expedition of Spanish naval officer Bernardo de Egoy.Following its defeat in the Spanish–American War, Spain sold Palau (including Peleliu) to Germany in 1899. Control passed to Japan in 1914 [read more].