The 2,909-ha site near the town of Soufriere includes the Pitons, two volcanic spires rising side by side from the sea (770 m and 743 m high respectively), linked by the Piton Mitan ridge. The volcanic complex includes a geothermal field with sulphurous fumeroles and hot springs. Coral reefs cover almost 60% of the site’s marine area. A survey has revealed 168 species of finfish, 60 species of cnidaria, including corals, eight molluscs, 14 sponges, 11 echinoderms, 15 arthropods and eight annelid worms. The dominant terrestrial vegetation is tropical moist forest grading to subtropical wet forest, with small areas of dry forest and wet elfin woodland on the summits. At least 148 plant species have been recorded on Gros Piton, 97 on Petit Piton and the intervening ridge, among them eight rare tree species. The Gros Piton is home to some 27 bird species (five of them endemic), three indigenous rodents, one opossum, three bats, eight reptiles and three amphibians. 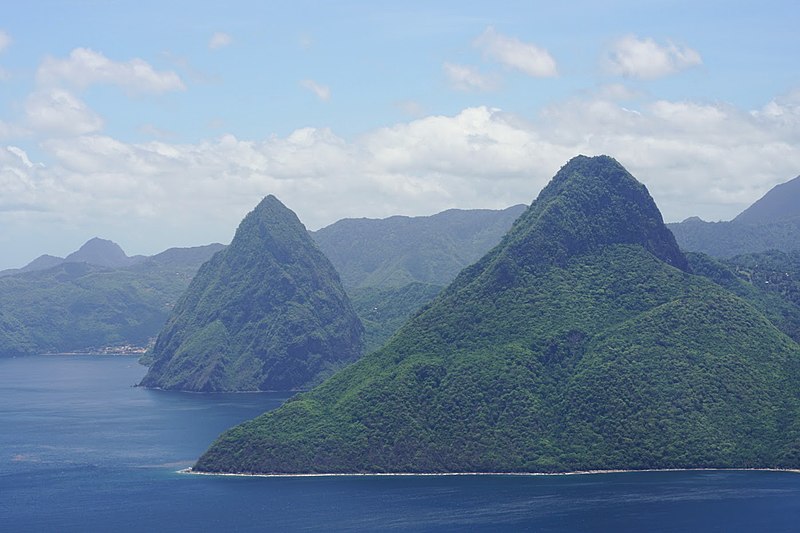 Belonging to the Lesser Antilles, the volcanic island of Saint Lucia is located in the Eastern Caribbean Sea and surrounded by the Atlantic Ocean. The Pitons Management Area (PMA) in the Southwest of Saint Lucia is a multiple use conservation and management area of 1,134 hectares of land and 875 hectares of sea, respectively, totaling 2,909 hectares. The eponymous Pitons, two towering volcanic spires, are the major iconic landmark of the island. These spectacular twin pinnacles, Gros Piton and Petit Piton, rise side by side from the sea to 770 and 743 m.a.s.l., respectively. They are bridged by an inland ridge and tower above an accessible caldera-like formation known as the Qualibou Depression. The PMA finds itself within the Soufriere Volcanic Centre and encompasses a wide range of its diverse geological features, including a site of geothermal activity with fumaroles and hot springs, known as the Sulphur Springs. Petroglyphs and diverse artifacts bear witness of the Amerindian Carib population which historically inhabited what is now the PMA.

Despite the small extension there is a high diversity of terrestrial habitats, flora and fauna. The dominant vegetation is comprised of various forest types, including rare elfin woodland on the summits. Small, little disturbed patches of natural forests remain, preserved by the steepness of the land.

The Marine Management Area within the PMA is a strip of roughly 11 km long and about one kilometre wide along the shore. It comprises a steeply sloping continental shelf with healthy fringing and patch reefs covering more than 60 % of the marine area, boulders and sandy plains. The diverse marine and coastal habitats harbour important marine life. Hawksbill turtles are seen inshore, and whale sharks and pilot whales offshore.

Criterion (vii): The PMA derives its primary visual impact and aesthetic qualities from the Pitons, two adjacent forest-clad volcanic spires rising abruptly from the sea to heights greater than 700 m.a.s.l. The Pitons predominate over the Saint Lucian landscape, being visible from virtually every part of the island and providing a distinctive landmark for seafarers. The combination of the Pitons against the backdrop of unspoilt lush and diverse natural tropical vegetation and a varying topography in a coastal setting gives the property its stunning natural beauty.

Criterion (viii): The PMA contains the greater part of a collapsed stratovolcano contained within the volcanic system, known to geologists as the Soufriere Volcanic Centre. Prominent within the volcanic landscape are two remnant volcanic peaks, Gros Piton and Petit Piton. The Pitons occur with a variety of other volcanic features including cumulo domes, explosion craters, pyroclastic deposits (pumice and ash), and lava flows. Collectively, these fully illustrate the volcanic history of an andesitic composite volcano associated with crustal plate subduction.

Castries is the capital city of Saint Lucia. Founded by the French in 1650, Castries now has a population of just over 11,000. Of itself, Castries doesn’t have a huge amount to offer visitors, and it’s usually just a place that you’ll pass through on your way to the more obvious attractions of Saint Lucia. Even though Castries doesn’t have much to offer, you can usually find a fair number of tourists wandering about the place, as the cruise ships that visit Saint Lucia dock at Pointe Seraphine, in the northern part of the city. There is a tourist information office, a 15 minute walk from the town centre in the cruise ship dock at Pointe Seraphine. Free maps are available from the information desk in the La Place Carenage mall on Jeremie Street, just along from the St.Lucia Fire Service building. Do wander around the lively local market on Jeremie Street. visit the viewing point over the harbour, at Morne Fortune, just below Government House [read more].

Gros Islet is a town at the far northern end of Saint Lucia. It is the newest town in Saint Lucia, being the most recent to have been promoted from being a village. There is a small beach at Gros Islet, but there are larger beaches and several large tourists resorts within walking distance to the north. Heading south, past the marina, the main beach on the west coast is Reduit Beach. The beaches on the east coast are exposed to the Atlantic wind, but are still largely untouched. Rodney Bay Marina is to the south and becomes a hub of activity when the Atlantic Ralley for Cruisers (ARC) finishes there in December. Beausejour Cricket Stadium is just outside of Gros Islet and was a venue for the 2007 Cricket World Cup. See Pidgeon Island National Park is just to the north of Gros Islet. There are a number of beaches within walking distance of Gros Islet [read more].

Vieux Fort is a town and Quarter on the southern tip of the island of Saint Lucia [read more].