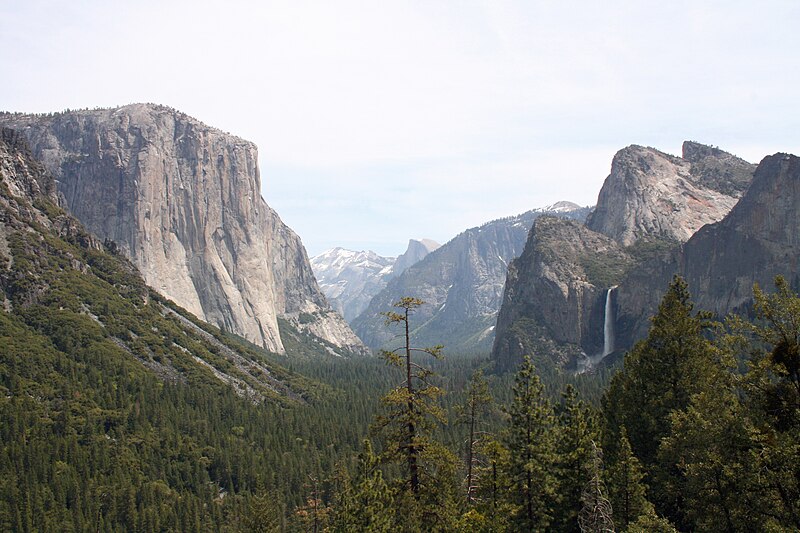 Yosemite National Park lies in the heart of California. With its ‘hanging’ valleys, many waterfalls, cirque lakes, polished domes, moraines and U-shaped valleys, it provides an excellent overview of all kinds of granite relief fashioned by glaciation. At 600–4,000 m, a great variety of flora and fauna can also be found here.

Yosemite National Park vividly illustrates the effects of glacial erosion of granitic bedrock, creating geologic features that are unique in the world. Repeated glaciations over millions of years have resulted in a concentration of distinctive landscape features, including soaring cliffs, domes, and free-falling waterfalls. There is exceptional glaciated topography, including the spectacular Yosemite Valley, a 1 kilometer (1/2 mile) deep, glacier-carved cleft with massive sheer granite walls. These geologic features provide a scenic backdrop for mountain meadows and giant sequoia groves, resulting in a diverse landscape of exceptional natural and scenic beauty.

Criterion (viii): Glacial action combined with the granitic bedrock has produced unique and pronounced landform features including distinctive polished dome structures, as well as hanging valleys, tarns, moraines and U-shaped valleys. Granitic landforms such as Half Dome and the vertical walls of El Capitan are classic distinctive reflections of geologic history. No other area portrays the effects of glaciation on underlying granitic domes as well as Yosemite does.

Mammoth Lakes is a resort city next to Mammoth Mountain which is a popular skiing destination. Mammoth Lakes is in the Eastern Sierra region of the Sierra Nevada mountains in California. The Sierra Nevada mountains are a popular snow skiing destination. For Californians living in Los Angeles, Mammoth Mountain is the easiest resort to get to from Los Angeles. The Town of Mammoth Lakes serves one main function: a place for these hordes of Los Angelenos to stay. Condos, motels, hotels, and restaurants fill this small town to serve the flood of winter visitors. In summer, the flood stops and rents plunge, making Mammoth an affordable base to explore the region. At 8000 feet of elevation, the city stays naturally cool during the region’s summer heat waves. Nearby Bishop routinely heats to 105°F (40C) while Mammoth tops out around 84°F (29C). Between the city of Mammoth Lakes and the Mammoth Mountain resort, a bike will do fine in summer [read more].

Fresno is in the San Joaquin Valley of California. The city has a population estimated at 530,000 and around 1 million live in the county (2019). Many visitors find themselves stopping in Fresno on the way to Yosemite National Park, Sequoia and Kings Canyon National Parks, or other destinations in the Sierras. The Save Mart Center at California State University, Fresno (“Fresno State”) has also played host to concerts featuring high-profile acts. Fresno’s most famous son is the writer William Saroyan, after whom a local theater is named. The city has a large Hmong community. Winter weather typically features highs around 60 °F (16 °C), and “extreme” lows in the low to mid 30s F, often with morning fog and sometimes frost. Rain fall is sparse and occurs exclusively in winter and early spring months. Most rain storms last less than 2 days and are often spread weeks apart. It is not uncommon to experience hail, however it is very rare to see snow fall on the valley floor [read more].

Often called “the Capital of Silicon Valley”, San Jose is the largest city in the Bay Area, 3rd largest in California, and the 10th largest city in the United States. It was named the 6th safest big city in the US in 2015. This clean, sprawling metropolis has sports, beautiful vistas, ethnic enclaves, and bleeds into the greater Bay Area for travelers who want to take their time in Northern California. El Pueblo de San Jose de Guadalupe (literally, the Town of Saint Joseph of Guadalupe) was founded by José Joaquín Moraga in 1777 near the present day intersection of Guadalupe Parkway and West Taylor Street. In 1797, the pueblo was moved to the Plaza Pueblo (now Plaza de César Chávez), around which San Jose grew. True to its location in the heart of Silicon Valley, San Jose is now home to the headquarters of many tech companies such as Cisco Systems, eBay, and Adobe Systems [read more].