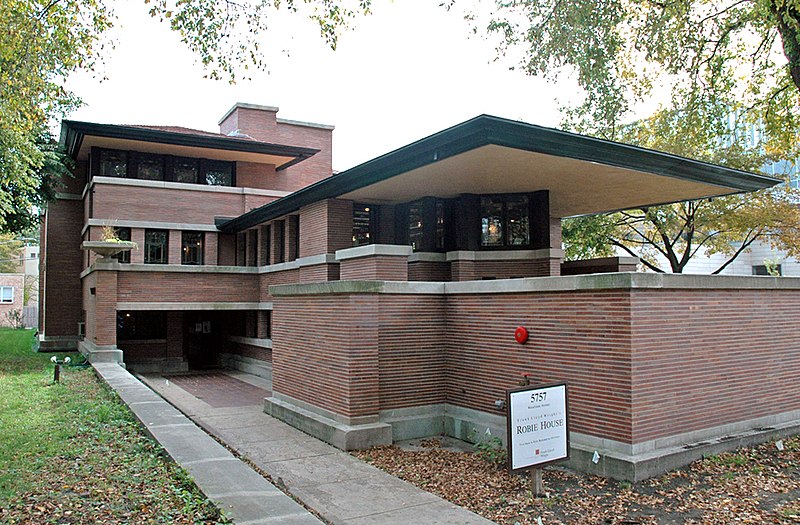 The property consists of eight buildings in the United States designed by the architect during the first half of the 20th century. These include Fallingwater (Mill Run, Pennsylvania), the Herbert and Katherine Jacobs House (Madison, Wisconsin) and the Guggenheim Museum (New York). These buildings reflect the ‘organic architecture’ developed by Wright, which includes an open plan, a blurring of the boundaries between exterior and interior and the unprecedented use of materials such as steel and concrete. Each of these buildings offers innovative solutions to the needs for housing, worship, work or leisure. Wright’s work from this period had a strong impact on the development of modern architecture in Europe.

The 20th-Century Architecture of Frank Lloyd Wright focusses upon the influence that the work of this architect had, not only in his country, the United States of America, but more importantly, on architecture of the 20th century and upon the recognized masters of the Modern Movement in architecture in Europe. The qualities of what is known as ‘Organic Architecture’ developed by Wright, including the open plan, the blurring between exterior and interior, the new uses of materials and technologies and the explicit responses to the suburban and natural settings of the various buildings, have been acknowledged as pivotal in the development of modern architectural design in the 20th century.

The property includes a series of eight buildings designed and built over the first half of the 20th century; each component has specific characteristics, representing new solutions to the needs for housing, worship, work, education and leisure. The diversity of functions, scale and setting of the components of the series fully illustrate the architectural principles of “organic architecture”.

The buildings employ geometric abstraction and spatial manipulation as a response to functional and emotional needs and are based literally or figuratively on nature’s forms and principles. In adapting inspirations from global cultures, they break free of traditional forms and facilitate modern life. Wright’s solutions would go on to influence architecture and design throughout the world, and continue to do so to this day.

The components of the series include houses both grand and modest (including the consummate example of a “Prairie” house and the prototype “Usonian” house); a place of worship; a museum; and complexes of the architect’s own homes with studio and education facilities. These buildings are located variously in city, suburban, forest, and desert environments. The substantial range of function, scale, and setting in the series underscores both the consistency and the wide applicability of those principles. Each has been specifically recognized for its individual influence, which also contributes uniquely to the elaboration of this original architectural language.

Such features related to innovation are subordinated to designs that integrate form, materials, technology, furnishings, and setting into a unified whole. Each building is uniquely fitted to the needs of its owner and its function and, though designed by the same architect, each has a very different character and appearance, reflecting a deep respect and appreciation for the individual and the particular. Together, these buildings illustrate the full range of this architectural language, which is a singular contribution to global architecture in spatial, formal, material, and technological terms.

The Outstanding Universal Value of the serial property is conveyed through attributes such as spatial continuity expressed through the open plan and blurred transitions between interior and exterior spaces; dynamic forms that employ innovative structural methods and an inventive use of new materials and technologies; design inspired by nature’s forms and principles; integral relationship with nature; primacy of the individual and individualized expression and transforming inspirations from other places and cultures.

Criterion (ii): The 20th-Century Architecture of Frank Lloyd Wright demonstrates an important interchange in the discourse that changed architecture on a global scale during the first half of the 20th century. The eight components illustrate different aspects of Wright’s new approach to architecture consciously developed for an American context; the resulting buildings, however, were in fact suited to modern life in many countries, and in their fusion of spirit and form they evoked emotional responses that were universal in their appeal. Reacting against prevailing styles in the United States, this approach took advantage of new materials and technologies, but was also inspired by principles of the natural world and was nurtured by other cultures and eras. These innovative ideas and the resulting unified architectural works were noted in European architectural and critical circles early in the century and influenced several of the trends and architects of the European Modern Movement in architecture. Wright’s influence is also noticeable in the work of some architects in Latin America, Australia and Japan.

Chicago is the home of the blues and the truth of jazz, the heart of comedy and the idea of the skyscraper. Here, the age of railroads found its center, and airplanes followed suit. “Stormy, Husky, Brawling / City of Big Shoulders,” Chicago is a Heartland boomtown, its ethos defined by urban planner Daniel Burnham’s immortal vision: “Make no little plans; they have no magic to stir men’s blood.” It is one of the world’s great cities, and yet the metropolitan luxuries of theater, shopping, and fine dining have barely put a dent in real Midwestern friendliness. It’s a city with… [read more]

One of the world’s greatest cities, New York (known as “The Big Apple”, “NYC,” and often called “New York City”) is a global center for media, entertainment, art, fashion, research, finance, and trade. The bustling, cosmopolitan heart of the 4th largest metropolis in the world and by far the most populous city in the United States, New York has long been a key entry point and a defining city for the nation. From the Statue of Liberty in the harbor to the Empire State Building towering over the Manhattan skyline, from the tunnels of the subway to the riches of… [read more]

Frank Lloyd Wright is said to have quipped, “Tip the world over on its side and everything loose will land in Los Angeles,” a quote that has since been repeated both by those who love and hate L.A. The “City of Angels” is a city of sharp contrasts, home to people who hail from all parts of the globe and an important center of culture, business, media, and international trade. However, it’s most famous for being a major center of the world’s television, motion picture, and music industry, which forms the base of the city’s status and lures visitors for… [read more]