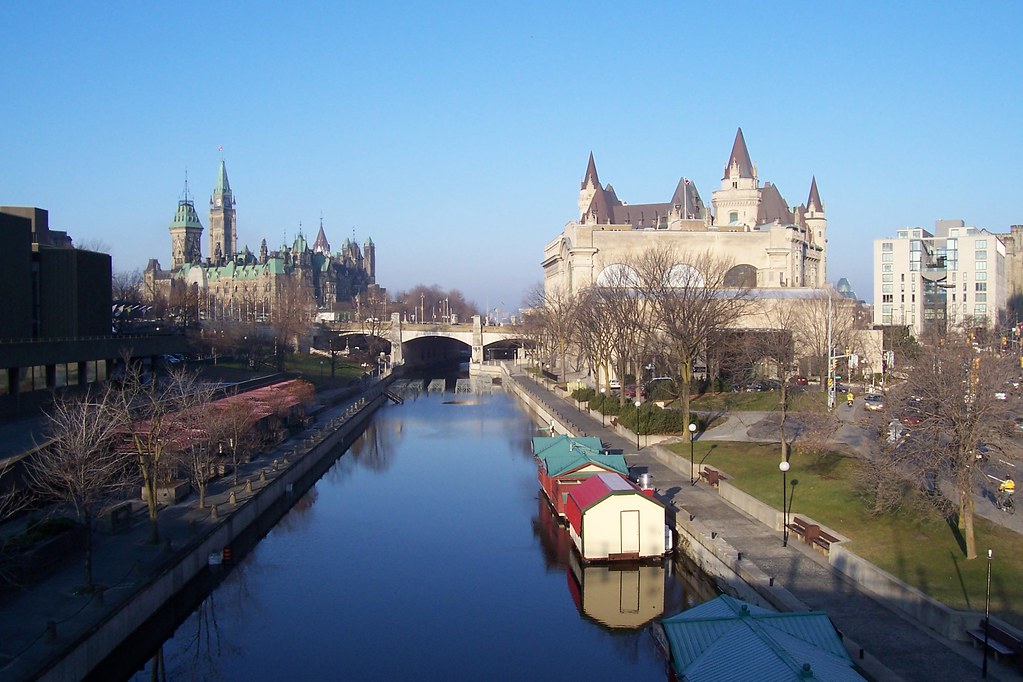 The Rideau Canal, a monumental early 19th-century construction covering 202 km of the Rideau and Cataraqui rivers from Ottawa south to Kingston Harbour on Lake Ontario, was built primarily for strategic military purposes at a time when Great Britain and the United States vied for control of the region. The site, one of the first canals to be designed specifically for steam-powered vessels, also features an ensemble of fortifications. It is the best-preserved example of a slackwater canal in North America, demonstrating the use of this European technology on a large scale. It is the only canal dating from the great North American canal-building era of the early 19th century to remain operational along its original line with most of its structures intact.

The Rideau Canal is a large strategic canal constructed for military purposes which played a crucial contributory role in allowing British forces to defend the colony of Canada against the United States of America, leading to the development of two distinct political and cultural entities in the north of the American continent, which can be seen as a significant stage in human history.

Criterion (iv): The Rideau Canal is an extensive, well preserved and significant example of a canal which was used for a military purpose linked to a significant stage in human history – that of the fight to control the north of the American continent.

The nominated property includes all the main elements of the original canal together with relevant later changes in the shape of watercourses, dams, bridges, fortifications, lock stations and related archaeological resources. The original plan of the canal, as well as the form of the channels, has remained intact. The Rideau Canal has fulfilled its original dynamic function as an operating waterway without interruption since its construction. Most of its lock gates and sluice valves are still operated by hand-powered winches.

All the elements of the nominated area (canal, associated buildings and forts) are protected as national historic sites under the Historic Sites and Monuments Act 1952-3. A buffer zone has been established. Repairs and conservation of the locks, dams, canal walls and banks are carried out directly under the control of Parks Canada. Each year one third of the canal’s assets are thoroughly inspected by engineers. A complete inventory thus exists of the state of conservation of all parts of the property. A Management Plan exists for the canal (completed in 1996 and updated in 2005), and plans are nearing completion for Fort Henry and the Kingston fortifications. The Canal Plan is underpinned by the Historic Canals Regulations which provide an enforcement mechanism for any activities that might impact on the cultural values of the monument.

Ottawa is Canada’s capital. With nearly a million citizens, it is Canada’s sixth-largest city, and Ontario’s second-largest city. Across the Ottawa river is Gatineau, Quebec. While most Ottawans are English-speaking, 15% have French as their mother tongue, making Ottawa Canada’s largest Francophone city outside of Quebec. Visitors come to Ottawa to see Parliament Hill, as well as the national museums. Ottawa started as a humble lumber town called Bytown; it was named after Colonel John By of the Royal Engineers who oversaw the construction of the Rideau Canal, now a UNESCO World Heritage site, much of which was done by hand, between 1826 and 1832. Lumber mills were built along the Ottawa River in the mid-nineteenth century and those brought employment and wealth to the growing population. The centre of action then, as now, was the Byward Market. [read more]

Kingston is a small city in the Canadian province of Ontario. It is on the north shore of Lake Ontario and the St Lawrence, almost exactly halfway between Montréal and Toronto. Kingston was settled in 1673 as Fort Cataraqui, a French colonial outpost which became Fort Frontenac. The Town of Kingston was officially founded in 1784. For a short time, it was the first capital of the United Province of Canada. Today, Kingston is one of the most historic cities in Canada with many churches, old buildings, picturesque neighbourhoods, and 19th century fortifications. The city provides venues for nightlife such as clubbing and pubbing, and provides weekend escapes for people living in the neighbouring cities of Ottawa, Montreal and Toronto. There are ample historic sites and museums to visit, and many lively summer events. [read more]

Montreal (French: Montréal) is the largest city in the Quebec province. While Quebec City is the capital, Montreal is the cultural and economic centre, and the main entry point to the province. With 1.7 million citizens in the city proper and 4 million in the urban area, Montreal is Canada’s second largest city, and the largest francophone city in the Americas. Still, a quarter of the population speak English as a mother language, and most Francophones are conversant in English. Old Montreal has a heritage of colonial times. Though a large city, Montreal gives opportunities for outdoor life, and for watching the legendary Montreal Canadiens ice hockey team. On an island in the St. Lawrence River at the historically highest navigable point, Montreal has been a strategic location since before the arrival of Europeans in Canada. [read more]