Monticello and the University of Virginia in Charlottesville 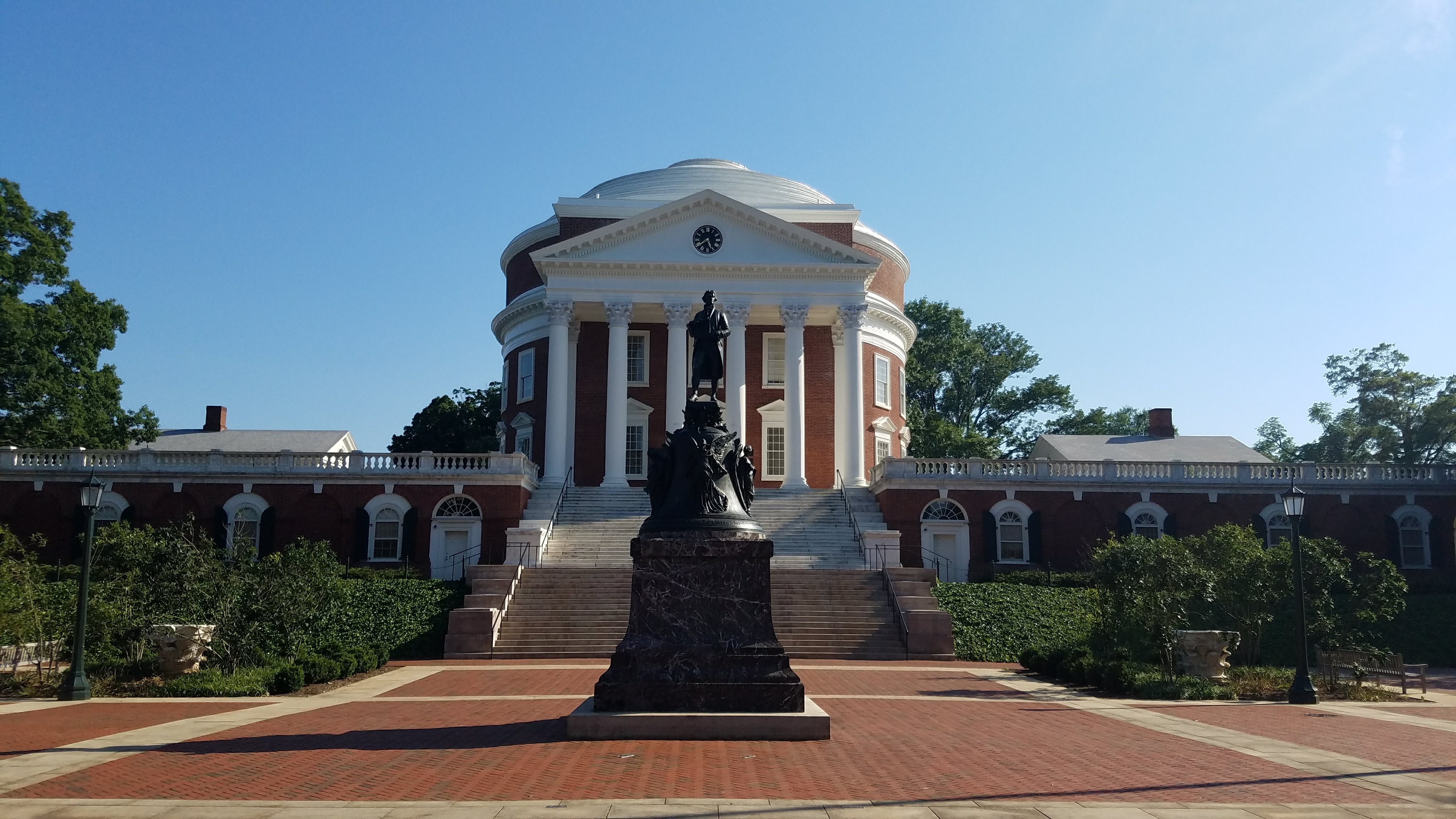 Thomas Jefferson (1743–1826), author of the American Declaration of Independence and third president of the United States, was also a talented architect of neoclassical buildings. He designed Monticello (1769–1809), his plantation home, and his ideal ‘academical village’ (1817–26), which is still the heart of the University of Virginia. Jefferson’s use of an architectural vocabulary based upon classical antiquity symbolizes both the aspirations of the new American republic as the inheritor of European tradition and the cultural experimentation that could be expected as the country matured.

Monticello was the plantation home of Thomas Jefferson (1743–1826), author of the American Declaration of Independence and third President of the United States. He designed both the plantation home (1769–1809) and his ideal Academical Village (1817–28) situated eight km away in Charlottesville, in central Virginia. The Academical Village still forms the heart of the University of Virginia, and exhibits a unique U-shaped plan dominated by the Rotunda with pavilions, hotels, student rooms, and gardens arrayed in rows to its south. The buildings are excellent and highly personalized examples of Neoclassicism, shown in their relationship to the natural setting and their blending of functionalism and symbolism. They were inspired by deep study of classical and contemporary examples and reflect Jefferson’s aspirations for the character of the new American republic. Both works have drawn international attention from the time of their construction.

Jefferson’s Monticello and his Academical Village precinct are notable for the originality of their plans and designs and for the refinement of their proportions and décor. His house at Monticello, with its dome, porticos supported by Doric columns, and cornices and friezes derived from classical Roman buildings, and his Academical Village, with its Rotunda modeled on the Pantheon and its ten pavilions each offering a different lesson in the classical orders and architecture as drawn from published classical models, together invoke the ideals of ancient Rome regarding freedom, nobility, self-determination, and prosperity linked to education and agricultural values.

Criterion (i): Both Monticello and the University of Virginia reflect Jefferson’s wide reading of classical and later works on architecture and design and also his careful study of the architecture of late 18th-century Europe. As such they illustrate his wide diversity of interests.

Criterion (iv): With these buildings Thomas Jefferson made a significant contribution to Neoclassicism, the 18th-century movement that adapted the forms and details of classical architecture to contemporary buildings.

Charlottesville, in central Virginia, is a lovely university town of about 40,000 with lots to offer. Charlottesville is a town steeped in history and culture. Of the eight U.S. presidents who came from Virginia, two — Thomas Jefferson and James Monroe — were from Charlottesville, and two more came from neighboring counties. Central Virginia was a major battlefield during the Civil and Revolutionary Wars. Jefferson, whom locals affectionately call “Mr. Jefferson,” or “TJ,” continues to cast a long shadow, particularly over local architecture. Many of Charlottesville’s public buildings are made of brick and built in a Jeffersonian style, and many private homes are colonial. His home at Monticello and the Jefferson-designed University of Virginia have set the tone for the communities’ beautiful buildings. When visiting Charlottesville, be sure to stop by the Albemarle Charlottesville Historical Society to learn more about the area’s rich history. The culture of Charlottesville revolves around two… [read more].

Lynchburg is an independent city of 75,000 in the Commonwealth of Virginia. It lies east of the Blue Ridge Mountains in Central Virginia. Lynchburg began in 1757 as a ferry town, fording traffic across the James River. The city is built on centuries of history, boasting strong connections to Thomas Jefferson, Patrick Henry, and other early American patriots. Because of the city’s use by the Confederacy as a supply and hospital center, it served as a battlefield in the American Civil War. Lynchburg has been designated a portion of Virginia’s Rail Heritage Region. Lynchburg’s historic districts contain many beautiful homes from the 19th century. Lynchburg’s name is derived from its founder, John Lynch, who, at the age of 17, began a ferry service across the James River to facilitate travel to and from New London. He would later be responsible for the bridge which would make his ferry service obsolete. Despite common… [read more].

Washington, D.C., the capital of the United States of America and the seat of its three branches of government, has an unparalleled collection of free, public museums, and the lion’s share of the nation’s most treasured monuments and memorials. The vistas on the National Mall between the Capitol, Washington Monument, White House, and Lincoln Memorial are iconic throughout the world. D.C. has shopping, dining, and nightlife befitting a world-class metropolis. Travelers will find the city to be exciting, cosmopolitan, and international. Virtually all of D.C.’s tourists flock to the Mall—a two-mile long, beautiful stretch of parkland that holds many of the city’s monuments and Smithsonian museums—but the city itself is a vibrant metropolis that often has little to do with monuments, politics, or white, neoclassical buildings. The Smithsonian is a “can’t miss,” but you haven’t really been to D.C. until you’ve been out and about the city. Washington, D.C., is a city born… [read more].