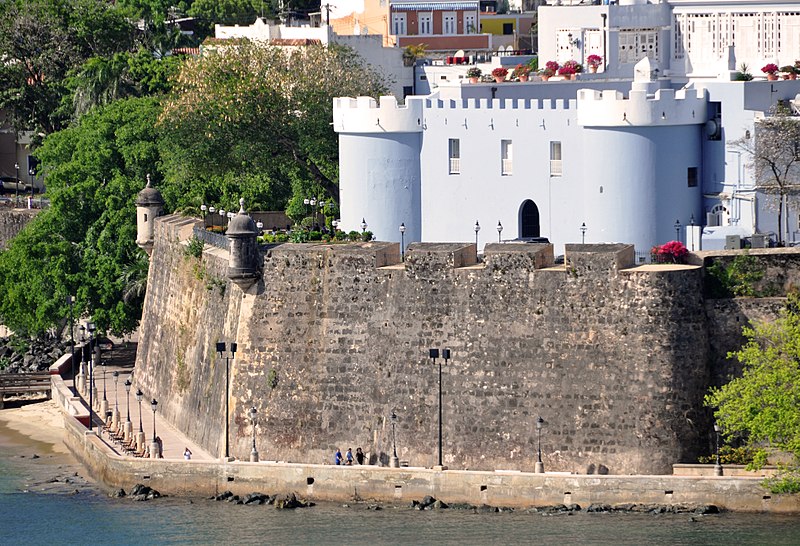 Between the 16th and 20th centuries, a series of defensive structures was built at this strategic point in the Caribbean Sea to protect the city and the Bay of San Juan. They represent a fine display of European military architecture adapted to harbour sites on the American continent.

La Fortaleza, along with the later fortifications of Castillo San Felipe del Morro, Castillo San Cristóbal and San Juan de la Cruz (El Cañuelo), and a large portion of the original San Juan City Wall, were built between the 16th and 20th centuries to protect the city and the Bay of San Juan. They are characteristic examples of the historic methods of construction used in military architecture over this period, which adapted European designs and techniques to the special conditions of the Caribbean port cities. La Fortaleza has served as a fortress, an arsenal, a prison, and residence of the Governor-General, and today as the seat and residence of the Governor of Puerto Rico.

These fortifications, which retain the general appearance of advanced 18th-century defense technology, clearly illustrate both a transfer of technology from Europe to America over a long period and its adaptation to the topography of a strategically significant yet difficult tropical site. Reflecting Italian Renaissance, Baroque, and French Enlightenment designs, the defenses express successive techniques and technologies in fortification construction. The varied examples of military architecture from the 16th to 20th centuries in the fortifications of San Juan are evidence of the imperial struggles that defined the development of the Americas. As one of the first as well as one of the last of the numerous seats of power in Spain’s American empire, these structures are now potent symbols of the cultural ties that link the Hispanic world.

Criterion (vi): La Fortaleza and San Juan National Historic Site outstandingly illustrate the adaptation to the Caribbean context of European developments in military architecture from the 16th to 20th centuries. They represent the continuity of more than four centuries of architectural, engineering, military, and political history.

San Juan is the capital of Puerto Rico, and, at about 318,000 (2019), its largest city. San Juan is the oldest city under the control of the United States. San Juan is in the north-east of Puerto Rico, and features distinctly century-old architecture, such as Spanish military forts built from the 1540s to 1800s, an active harbor, and a very active economic area in the Hato Rey district. San Juan has magnificent beaches, hotels, plazas, historic sites, and museums. San Juan has one of the best harbors in the Caribbean. The city celebrated its 5th century in 2008 from the founding of Caparra. (In 2021, it will be 500 years since the Caparra settlement was moved to Puerto Rico isle (Old San Juan.) It has a land area of about 76 sq mi (200 km2). San Juan is a tropical city with winter temperatures typically ranging in the low 80s°F (21-24°C) during the day, and low 70s°F at night [read more].

Bayamón is a municipality of Puerto Rico located in the northern coastal valley, north of Aguas Buenas and Comerío; south of Toa Baja and Cataño; west of Guaynabo; and east of Toa Alta and Naranjito. Bayamón is spread over 11 barrios and Bayamón Pueblo (the downtown area and the administrative center of the city). It is part of the San Juan-Caguas-Guaynabo Metropolitan Statistical Area. The Taíno people, the indigenous peoples who encountered European explorers and settlers, were the long-time settlers in this area. The Spanish colonist Juan Ramírez de Arellano established Bayamón as a Spanish settlement on May 22, 1772. Two beliefs exist about the origin of the name Bayamón. According to one belief, it was named after the local Taíno chief, Bahamon. As per the other belief, the name was derived from the Taíno word Bayamongo, which is a river that runs across this region, implying that Bayamón is the area around this main river, which later on became the center of the city’s development [read more].

Carolina is a municipality in Puerto Rico. An eastern suburb of San Juan, it includes the metropolitan area’s international airport as well as the beach resort district of Isla Verde. Carolina is just a little town near San Juan but contains to be what it means to be the location of the main international airport. As well, there’s just only 1 bridge in the town is Teodoro Moscoro Bridge. So as well, It’s kind of good that is what it means before. To make away, That it’s always access faster if you take Highway 26 [read more].