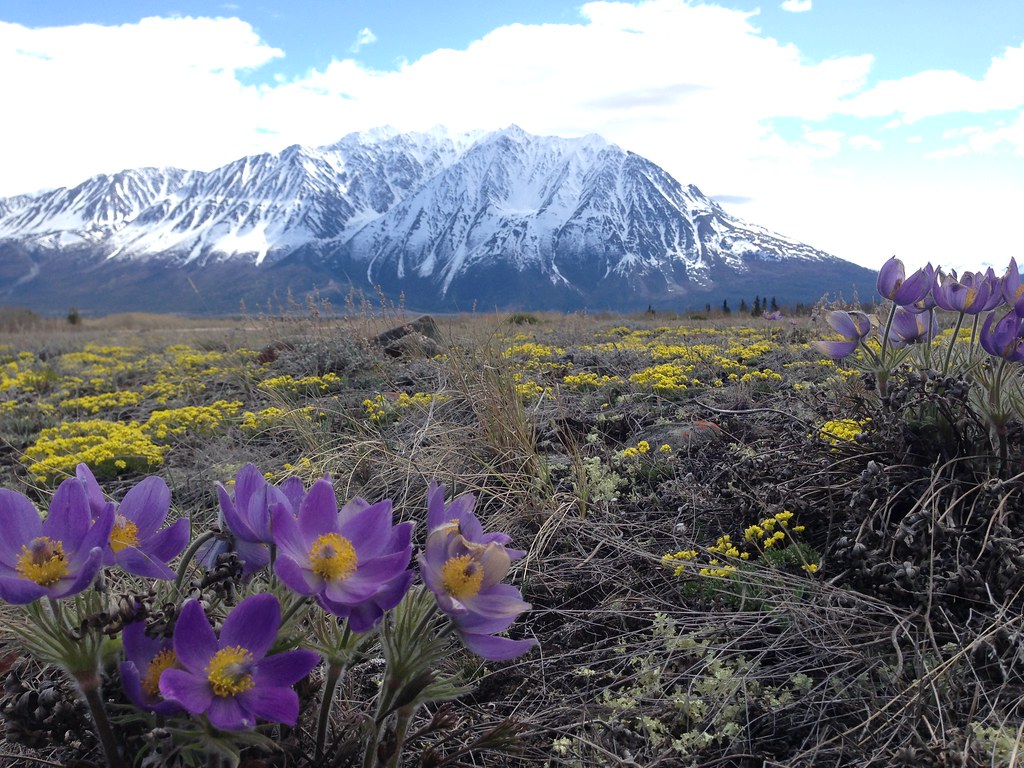 These parks comprise an impressive complex of glaciers and high peaks on both sides of the border between Canada (Yukon Territory and British Columbia) and the United States (Alaska). The spectacular natural landscapes are home to many grizzly bears, caribou and Dall’s sheep. The site contains the largest non-polar icefield in the world.

The Kluane / Wrangell-St. Elias / Glacier Bay / Tatshenshini-Alsek national parks and protected areas along the boundary of Canada and the United States of America contain the largest non-polar icefield in the world as well as examples of some of the world’s longest and most spectacular glaciers. Characterized by high mountains, icefields and glaciers, the property transitions from northern interior to coastal biogeoclimatic zones, resulting in high biodiversity with plant and animal communities ranging from marine, coastal forest, montane, sub-alpine and alpine tundra, all in various successional stages. The Tatshenshini and Alsek river valleys are pivotal because they allow ice-free linkages from coast to interior for plant and animal migration. The parks demonstrate some of the best examples of glaciation and modification of landscape by glacial action in a region still tectonically active, spectacularly beautiful, and where natural processes prevail.

Criterion (vii): The joint properties encompass the breadth of active tectonic, volcanic, glacial and fluvial natural processes from the ocean to some of the highest peaks in North America. Coastal and marine environments, snow-capped mountains, calving glaciers, deep river canyons, fjord-like inlets and abundant wildlife abound. It is an area of exceptional natural beauty.

Criterion (viii): These tectonically active joint properties feature continuous mountain building and contain outstanding examples of major ongoing geologic and glacial processes. Over 200 glaciers in the ice-covered central plateau combine to form some of the world’s largest and longest glaciers, several of which stretch to the sea. The site displays a broad range of glacial processes, including world-class depositional features and classic examples of moraines, hanging valleys, and other geomorphological features.

Criterion (ix): The influence of glaciation at a landscape level has led to a similarly broad range of stages in ecological succession related to the dynamic movements of glaciers. Subtly different glacial environments and landforms have been concentrated within the property by the sharp temperature and precipitation variation between the coast and interior basins. There is a rich variety of terrestrial and coastal/marine environments with complex and intricate mosaics of life at various successional stages from 500 m below sea level to 5000 m above.

Criterion (x): Wildlife species common to Alaska and Northwestern Canada are well represented, some in numbers exceeded nowhere else. The marine components support a great variety of fauna including marine mammals and anadromous fish, the spawning of which is a key ecological component linking the sea to the land through the large river systems. Populations of bears, wolves, caribou, salmon, Dall sheep and mountain goats that are endangered elsewhere are self-regulating here. This is one of the few places remaining in the world where ecological processes are governed by natural stresses and the evolutionary changes in a glacial and ecological continuum.

Haines Junction is a village in southwestern Yukon with a population of 610 (2016). It is a major administrative centre for the Champagne and Aishihik First Nations. For around 2,000 years, the Southern Tutchone people had seasonal hunting and fishing camps in the area of present-day Haines Junction. The original name of the area was “Dakwakada”, a Southern Tutchone word meaning “high cache”. It was common for Tutchone people to use raised log caches to store food year-round or temporarily while they hunted and fished in an area. The Haines Junction area was also important for trade between the coastal and interior peoples. It lies at the interior end of the Chilkat Pass, one of only three passes that allowed travel between the coast and the interior, which was used extensively for trade between the coastal Tlingit and Southern Tutchone people. Haines Junction was established in 1942 and 1943 during the construction of the Alaska Highway [read more].

Ibex Valley is a hamlet in Canada’s Yukon. The hamlet is considered a local advisory area with an advisory council providing local government. Its population in 2001 according to the Canada 2001 Census was 315. Ibex Valley comprises residential areas along the Alaska Highway immediately outside the Whitehorse city limits as far as approximately historical mile 945, as well as a small number of sideroads, including a five-mile loop of the original Alaska Highway alignment from Mile 929 to 934. The hamlet is part of the Whitehorse Census Agglomeration. Seventy percent of the population is non-aboriginal. Ibex Valley has a volunteer fire department. While most residents work in Whitehorse, some residents are engaged in agriculture or wilderness tourism activities [read more].

Whitehorse is the capital of the Yukon. It has spectacular scenery, and easy access to the natural splendor and recreational opportunities around it, such as paddling on the Yukon River and hiking or biking its many trails. As the territory’s largest city, it has museums and services. Whitehorse has been the capital of the Yukon since 1953, and has a population of around 30,000 (2019), which is about 75 percent of the population of Yukon Territory. The city is along the banks of the Yukon River. It is in a rain shadow area, so Whitehorse is Canada’s driest city. Whitehorse’s downtown and Riverdale areas occupy both shores of the Yukon River, which originates in British Columbia and meets the Bering Sea in Alaska. The city was named after the White Horse Rapids for their resemblance to the mane of a white horse, near Miles Canyon, before the river was dammed. Archeological research south of the downtown area at Canyon City, has revealed evidence of use by First Nations (Aboriginal people) for several thousand years [read more].

Haines is a small port community (population about 2,000) in Southeastern Alaska on the shores of the Lynn Canal, the state’s longest fjord. It is surrounded by glacier-covered mountains of the Coast Range. If you loved the TV show Northern Exposure, you’ll love the down-home feel of Haines. It’s the kind of laid-back place you picture when you think about an Alaskan town. The first thing you’ll notice when you arrive is how scenic Haines is. Haines is blessed with surrounding natural areas and wildlife in what is known as the “Valley of the Eagles.” The area is a magnet for bald eagles, drawn by the warm open water and abundant supply of salmon. More than 3,500 of the birds visit from October to February – during that time a dozen eagles may share a single tree limb. Haines Convention and Visitors Bureau. You can pick up the Haines Visitor’s Guide, walking tour maps, e.g., for Fort Seward, and “Haines is for Hikers” [read more].

Juneau (“JOO-noh”) is the capital of Alaska, in the state’s Southeastern region. It has a population of about 32,000 (2019). The municipality of Juneau, with an area larger than Rhode Island and Delaware combined, is the second largest in area in the country. It has been the capital of Alaska since 1906, when the government of the then-Alaska Territory was moved from Sitka. Alaska became a state 53 years later. Juneau is on the North American mainland and yet cannot be reached by land. Effectively, the rugged mountains surrounding it make Juneau into an “island” city, reachable only by air or by sea. It is the only state capital that can not be reached by land from the state it serves. Moreover, Juneau is the largest US state capital in area and the only one that borders a foreign country. The economy is based on government, tourism, mining, and fishing. One of the interesting things about Juneau and Alaska is the effect on public life of being such a geographically large state with an “island” state capital [read more].

Sitka is a city of about 9,000 on the Pacific Ocean coast of Baranof Island in Alaska. First settled by Tlingit Aboriginal people, Sitka also has history as a Russian settlement, established in 1799 by Alexander Baranoff of the Russian American Company, which became the Russian capital of Alaska. In 1867, when Russia sold Alaska to the US, the transfer ceremony took place on Castle Hill at Sitka on October 18, a day celebrated as Alaska Day. Sitka attracts now about a quarter million visitors a year. The downtown area of Sitka can be explored by foot. A walking map , with two suggested loops, one westward to the Sitka Channel, the other eastward to the Alaska Raptor Center, may be obtained from the Summer Information Desk in the Harrigan Centennial Hall near the Crescent Harbor Lightering Facility. Bring your mobile devices to help you get around downtown; Sitka has a free municipal Wi-Fi system paid for by the cruise ship docking fees [read more].