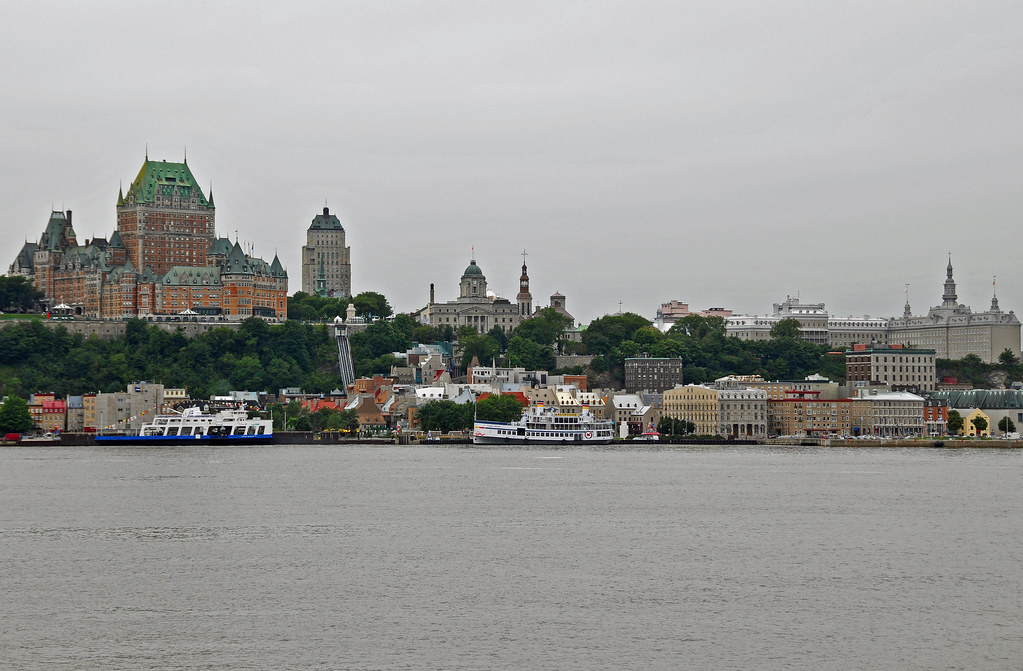 Québec was founded by the French explorer Champlain in the early 17th century. It is the only North American city to have preserved its ramparts, together with the numerous bastions, gates and defensive works which still surround Old Québec. The Upper Town, built on the cliff, has remained the religious and administrative centre, with its churches, convents and other monuments like the Dauphine Redoubt, the Citadel and Château Frontenac. Together with the Lower Town and its ancient districts, it forms an urban ensemble which is one of the best examples of a fortified colonial city.

City Hall of Quebec City and the Price Building (Gilbert Bochenek/Wikipedia,CC BY 3.0).

Founded in the 17th century, Québec City bears eloquent testimony to important stages in the European settlement of the Americas: it was the capital of New France and, after 1760, of the new British colony. The Historic District of Old Québec is an urban area of about 135 hectares. It is made up to two parts: the Upper Town, sitting atop Cap Diamant and defended by fortified ramparts, a citadel, and other defensive works, and the Lower Town, which grew up around Place Royale and the harbour. A well-preserved integrated urban ensemble, the historic district is a remarkable example of a fortified colonial town, and unique north of Mexico.

Criterion (iv) :  A coherent and well-preserved urban ensemble, the Historic District of Old Québec is an exceptional example of a fortified colonial town and by far the most complete north of Mexico.

Criterion (vi) : Québec, the former capital of New France, illustrates one of the major stages in the European settlement of the colonization of the Americas by Europeans.

Quebec City (French: Ville de Québec, or just Québec) is the capital of the Canadian province of Quebec. Located at a commanding position on cliffs overlooking the St. Lawrence Seaway, Quebec City’s Old Town is a UNESCO World Heritage Site and one of only two cities in North America (the other being Campeche in Mexico) with its original city walls. Quebec is a city of about 700,000 residents. Understand[edit] Quebec City is the capital city of the province of Quebec (though it is referred to as the National Capital in the province). Much of the business here is of the administrative and bureaucratic nature, which would normally make a city quite dull. Fortunately, the city has a remarkable history, as the fortress capital of New France since the 16th century. The vibrant historical centre makes for an incredible visit. [read more]

Trois-Rivieres (historically and rarely Three Rivers) is the second-oldest city in Quebec, founded in 1634. It lies almost half-way between Montreal and Quebec City and can make a nice stopover on travel between those two cities. Trois-Rivières is the regional capital of the Mauricie administrative region of Quebec, a vast area of 39,748 km². Located at the junction of two economic regions, Trois-Rivières radiates through a pool of almost 475 000 people. It is 130 km from Montreal and 120 km from Quebec City on ​​the north shore of the Saint Lawrence River. The Saint-Maurice river, with its watershed with a length of 587 km, is the main river of the Mauricie administrative region. The waters of four rivers bathe his magnificent Laurentian plain. St. Anne, Batiscan, Du Loup river and Maskinongé river are also important for economic and recreational tourism development. [read more]

Montreal (French: Montréal) is the largest city in the Quebec province. While Quebec City is the capital, Montreal is the cultural and economic centre, and the main entry point to the province. With 1.7 million citizens in the city proper and 4 million in the urban area, Montreal is Canada’s second largest city, as well as the largest francophone city in the Americas. Still, a quarter of the population speak English as a mother language, and most Francophones are conversant in English. Old Montreal has a heritage of colonial times. Though a large city, Montreal gives opportunities for outdoor life, as well as watching the legendary Montreal Canadiens ice hockey team. On an island in the St. Lawrence River at the historically highest navigable point, Montreal has been a strategic location since before the arrival of Europeans in Canada. Hochelaga was on present-day Montreal when Cartier first visited. [read more]