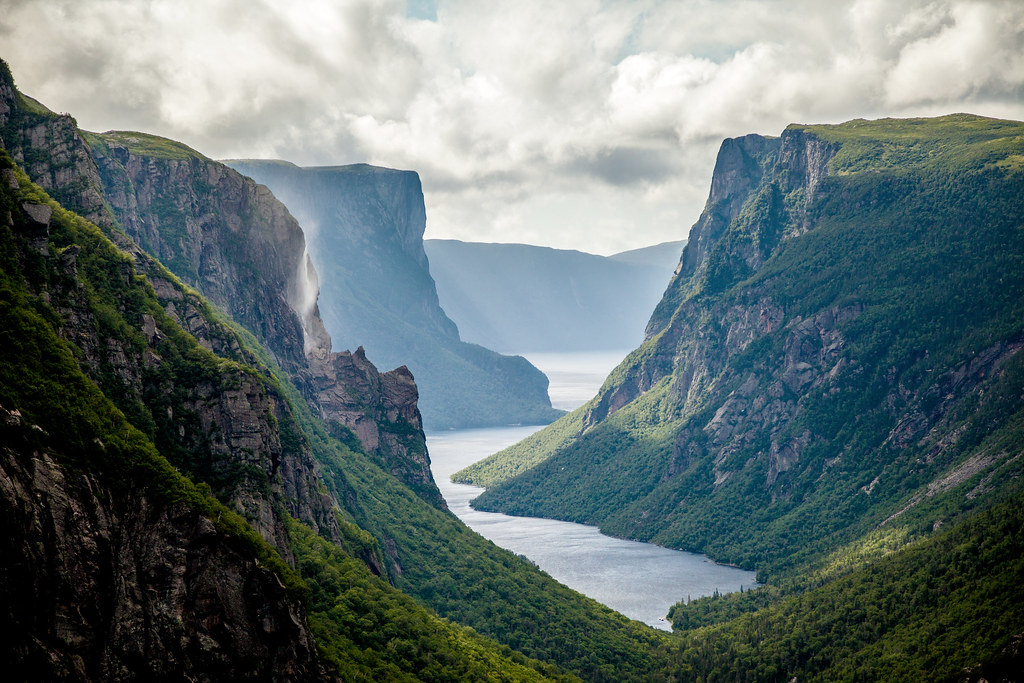 Situated on the west coast of the island of Newfoundland, the park provides a rare example of the process of continental drift, where deep ocean crust and the rocks of the earth’s mantle lie exposed. More recent glacial action has resulted in some spectacular scenery, with coastal lowland, alpine plateau, fjords, glacial valleys, sheer cliffs, waterfalls and many pristine lakes.

Gros Morne National Park, located on the Great Northern Peninsula in the Canadian province of Newfoundland and Labrador, illustrates some of the world’s best examples of the process of plate tectonics. Within a relatively small area are classic, textbook examples of monumental earth-building and modifying forces that are unique in terms of their clarity, expression and ease of access. The property presents the complete portrayal of the geological events that took place when the ancient continental margin of North America was modified by plate movement by emplacement of a large, relocated portion of oceanic crust and ocean floor sediments. The park also presents an outstanding demonstration of glaciations in an island setting. The fjords, waterfalls and geological structures of the park combine to produce a landscape of high scenic value.

Criterion (viii): The rocks of Gros Morne National Park collectively present an internationally significant illustration of the process of continental drift along the eastern coast of North America and contribute greatly to the body of knowledge and understanding of plate tectonics and the geological evolution of ancient mountain belts. In glacier-scoured highlands and spectacular fjords, glaciation has made visible the park’s many geological features.

Corner Brook is the largest city in Western Newfoundland. It offers many urban amenities and is a great launching point for exploring Western Newfoundland. The city’s excellent port is also an attraction for visiting cruise ships, such as the Queen Mary II. The Corner Brook area has been home to settlement for over a century and a half, but it has a fishery history going further back. It was surveyed by Captain Cook in 1767 before he went on to survey Australia and New Zealand. The Corner Brook area became a highly developed centre for pulp & paper with one of the largest operations in the world. The city of Corner Brook came into existence in the year 1956 with the amalgamation of four area communities, each still reflected in the areas of Humbermouth, Curling, Westside, and Townsite. In many ways, the city’s vibe is best described by former Mayor Charles Pender: “As a regional centre, we have the small town atmosphere with a big city infrastructure where people can live in peace and security and raise a family [read more].”

Stephenville is a town of 6,600 people (2016) in Western Newfoundland. This place was known as the Acadian village, between 1848 and 1870. The populace of the village consisted of Roman Catholics who eked out a living, farming and fishing. The town’s population continued to grow because of the stable economy. It was home to Ernest Harmon AFB, which was operated by the United States Air Force from 1941 to 1966. The base precipitated an economic boom of sorts on Newfoundland’s southwest coast during the 1940s. The village of Stephenville grew from a hamlet of several hundred people with no paved streets, side walks, water or sewage system in 1941 into a modern town of over 5,000 by the mid-1950s. By the time Ernest Harmon AFB closed in 1966, the town had more than doubled in size, partly as a result of the provincial government’s forced resettlement policy toward residents of outports [read more].

Deer Lake is a town of 5,200 people (2016) in Western Newfoundland. It is the gateway to the Great Northern Peninsula and the closest major town to Gros Morne National Park. The town is the gateway to the Great Northern Peninsula, owing to an important highway interchange on the Trans-Canada Highway. It is the closest major community to Gros Morne National Park and is home to the Deer Lake Regional Airport. The first European settlers in the area arrived from Cape Breton Island in Nova Scotia in 1864. They came as loggers and trappers, and later took up farming. In 1922, a work camp was set up to support the International Pulp and Paper company. The camp became the town of Deer Lake. A townsite was constructed in 1925 and included a railway terminal, churches and a small hospital. The airport was built in 1955 as the principal airport for western Newfoundland. It and is one of the town’s major employers [read more].