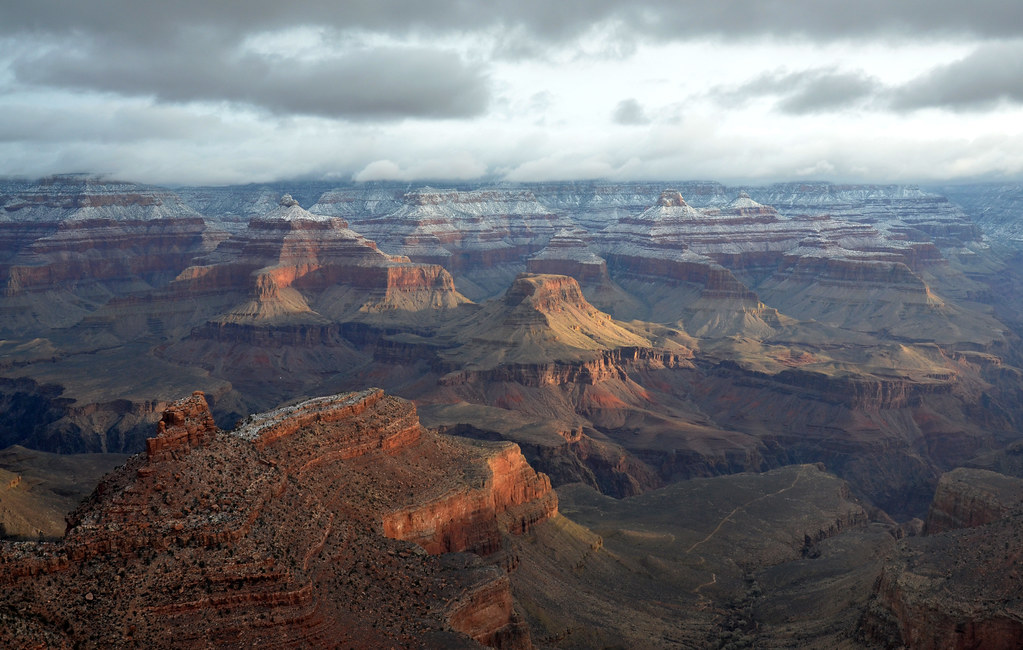 Carved out by the Colorado River, the Grand Canyon (nearly 1,500 m deep) is the most spectacular gorge in the world. Located in the state of Arizona, it cuts across the Grand Canyon National Park. Its horizontal strata retrace the geological history of the past 2 billion years. There are also prehistoric traces of human adaptation to a particularly harsh environment. 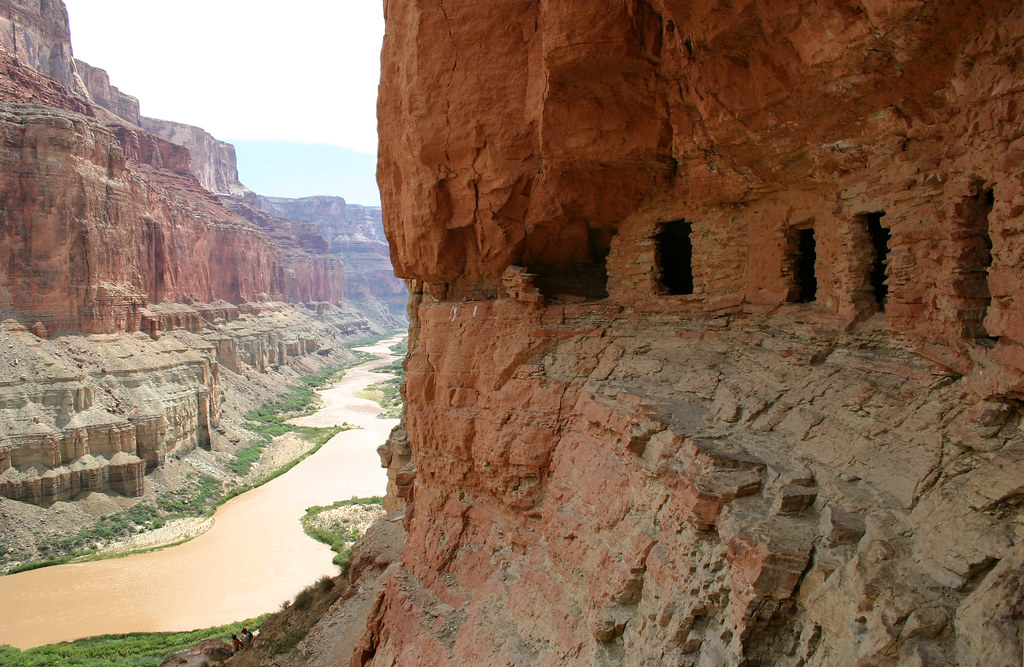 The Grand Canyon is among the earth’s greatest on-going geological spectacles. Its vastness is stunning, and the evidence it reveals about the earth’s history is invaluable. The 1.5-kilometer (0.9 mile) deep gorge ranges in width from 500 m to 30 km (0.3 mile to 18.6 miles). It twists and turns 445 km (276.5 miles) and was formed during 6 million years of geologic activity and erosion by the Colorado River on the upraised earth’s crust. The buttes, spires, mesas and temples in the canyon are in fact mountains looked down upon from the rims. Horizontal strata exposed in the canyon retrace geological history over 2 billion years and represent the four major geologic eras.

Criterion (viii): Within park boundaries, the geologic record spans all four eras of the earth’s evolutionary history, from the Precambrian to the Cenozoic. The Precambrian and Paleozoic portions of this record are particularly well exposed in canyon walls and include a rich fossil assemblage. Numerous caves shelter fossils and animal remains that extend the paleontological record into the Pleistocene.

Criterion (ix): Grand Canyon is an exceptional example of biological environments at different elevations that evolved as the river cut deeper portraying five of North America’s seven life zones within canyon walls. Flora and fauna species overlap in many of the zones and are found throughout the canyon.

Criterion (x): The park’s diverse topography has resulted in equally diverse ecosystems. The five life zones within the canyon are represented in a remarkably small geographic area. Grand Canyon National Park is an ecological refuge, with relatively undisturbed remnants of dwindling ecosystems (such as boreal forest and desert riparian communities), and numerous endemic, rare or endangered plant and animal species.

Page is a city of 7,600 people (2018) in northern Arizona. The city is best known for its two main attractions, Antelope Canyon and Lake Powell. Page Municipal Airport (PGA) has non-stop service on Contour Airlines from Las Vegas and Phoenix Sky Harbor International Airport. Grand Canyon Airlines has charter flights to Grand Canyon. Lake Powell, is a destination “hot-spot” with its breathtaking scenery and welcoming environment. The lake caters to every traveler with secluded spots for relaxation and camping and deeper waters for boating, tubing, and jet-skiing. Lake Powell is also a gateway to many world-famous attractions such as Rainbow Bridge in Utah. Antelope Canyon is a “slot canyon”, a narrow chasm in erosions in sandstone. Years of water and sand has rounded the edges to form curves and flowing shapes in the rock. Photographers love the beauty and unique shapes and lighting conditions of the canyons. Flash flooding still occurs in the canyon and may, at times, result in up to several months of closing [read more].

Situated in the midst of the southern Nevada desert, Las Vegas is the largest city in the state of Nevada. Nicknamed Sin City, Las Vegas and its surrounding communities are famed for their mega-casino resorts, often lavishly decorated with names and themes meant to evoke romance, mystery, and exotic destinations. Along the brightly-lit Strip through the center of the city, visitors will find all manner of amusements and entertainment: circuses, stage shows, thrill rides, erotica, exotic animals, fine dining restaurants, nightclubs, shopping, and elaborate fountain displays, to say nothing of the age-old allure of gambling and drinking. Compared with other American cities, even those in the western United States, Las Vegas is a relatively recent arrival. It was founded in 1905 and for many years was a fairly small settlement. However, several pivotal events in the early- to mid-20th century catapulted Las Vegas to prominence and set it on the path to grow into what it is today [read more].

Henderson is the second largest city in Nevada. The border between Henderson and Las Vegas has become virtually nonexistent – one city butts up against the other. This article indeed doesn’t only cover Henderson but also Las Vegas east of the Strip. One area of Henderson, Green Valley, was the first master planned community in the state. If you are coming from Boulder City or Arizona, you can either take US 93 or Route 166, Route 166 is Lakeshore Drive and is going to change into State Route 564 once, you are not overlapping with Route 147 anymore. Or in US 93, it will change into a freeway as soon as you pass the Railroad Pass Hotel & Casino. If you came from Lake Mead or Lake Las Vegas, get on SR 564 and still continue until you enter Henderson. If took U.S 93, you will have to pass through Boulder City, and never take the exit after crossing over Veterans Memorial Dr intersection [read more].