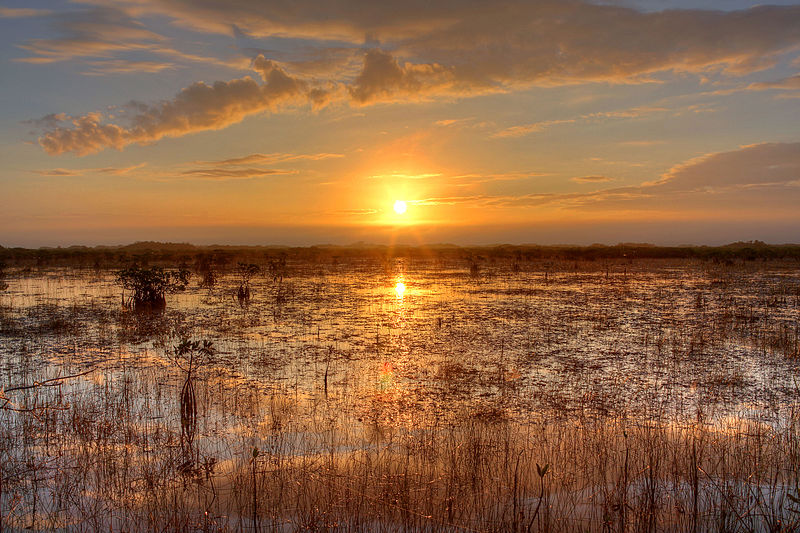 This site at the southern tip of Florida has been called ‘a river of grass flowing imperceptibly from the hinterland into the sea’. The exceptional variety of its water habitats has made it a sanctuary for a large number of birds and reptiles, as well as for threatened species such as the manatee.

Everglades National Park is the largest designated sub-tropical wilderness reserve on the North American continent. Its juncture at the interface of temperate and sub-tropical America, fresh and brackish water, shallow bays and deeper coastal waters creates a complex of habitats supporting a high diversity of flora and fauna. It contains the largest mangrove ecosystem in the Western Hemisphere, the largest continuous stand of sawgrass prairie and the most significant breeding ground for wading birds in North America.

Criterion (viii): The Everglades is a vast, nearly flat, seabed that was submerged at the end of the last Ice Age. Its limestone substrate is one of the most active areas of modern carbonate sedimentation.

Criterion (x): Everglades National Park is a noteworthy example of viable biological processes. The exceptional variety of its water habitats has made it a sanctuary for a large number of birds and reptiles and it provides refuge for over 20 rare, endangered, and threatened species. These include the Florida panther, snail kite, alligator, crocodile, and manatee. It provides important foraging and breeding habitat for more than 400 species of birds, includes the most significant breeding grounds for wading birds in North America and is a major corridor for migration.

Miami is a major city in the south-eastern United States and the second most populous city in Florida. The Miami metropolitan area is the largest in the state with an estimated population of over 6.1 million (2017), which makes it the 7th most populous metro area in the United States. Although tourists generally consider Miami Beach to be part of Miami, it is its own municipality. Miami Beach sits on a barrier island east of Miami and Biscayne Bay. It is home to lots of beach resorts, and is one of the most popular spring break party destinations in the world. This article only covers the city of Miami, not Miami Beach. Some other sites associated with Miami, like the Miami Zoo and the Miami Dolphins football team, are in other suburbs within Miami-Dade County. Miami has the largest Latin American population outside of Latin America, with nearly 65% of its population either from Latin America or of Latin American ancestry [read more].

Hialeah is a city in the Florida Gold Coast region of Florida. MetroRail, a rapid transit rail system connecting to downtown Miami and the airport, has three stations in Hialeah – 1 Hialeah station, 2 Okechobee station, 3 Tri-Rail transfer station. The Tri-Rail commuter rail system has two stops in Hialeah: MetroRail transfer, and 4 Hialeah Market station. Tri-Rail connects to Miami Airport, Fort Lauderdale Airport, and West Palm Beach Airport. Note that “Tri-Rail” station on MetroRail, and “MetroRail transfer” station on Tri-Rail, are in the same location, so you can transfer between the lines. See Hialeah Park race track. A historic horse racing track, opened in 1921. In 2001, the park was closed to the public. Although it has been designated as a historical site, no work has been done to restore the facilities and the stables were demolished. Parks: Amelia Earhart Park (4th Avenue and East 65th Street). Open from sunrise to sunset. A great park for families in Hialeah [read more].

Port St. Lucie is a sprawling tropical city on the Treasure Coast of Florida. The population is 174,110 and 444,420 in its metropolitan area. Residents refer to the city by its initials, PSL. The spring training home of the New York Mets, this city has many fun activities if you know where to look; the new downtown area is in its infancy, but once complete will bring more activities for residents and visitors. Port St. Lucie is the largest city on a region known as the Treasure Coast, an area consisting of almost 600,000 people. Port St. Lucie is a coastal city on the Indian River Lagoon with many fun activities if you look around, like baseball, parks, bowling, and golf. With developments for a downtown area going into effect along US-1, PSL is modernizing one step at a time, though it maintains a suburban feel. It blossomed from a town of only 500 people in its first census in 1970 to a boom-town of 170,000 by 2010 [read more].