In the language of the Mayan peoples who once inhabited this region, Sian Ka’an means ‘Origin of the Sky’. Located on the east coast of the Yucatán peninsula, this biosphere reserve contains tropical forests, mangroves and marshes, as well as a large marine section intersected by a barrier reef. It provides a habitat for a remarkably rich flora and a fauna comprising more than 300 species of birds, as well as a large number of the region’s characteristic terrestrial vertebrates, which cohabit in the diverse environment formed by its complex hydrological system. 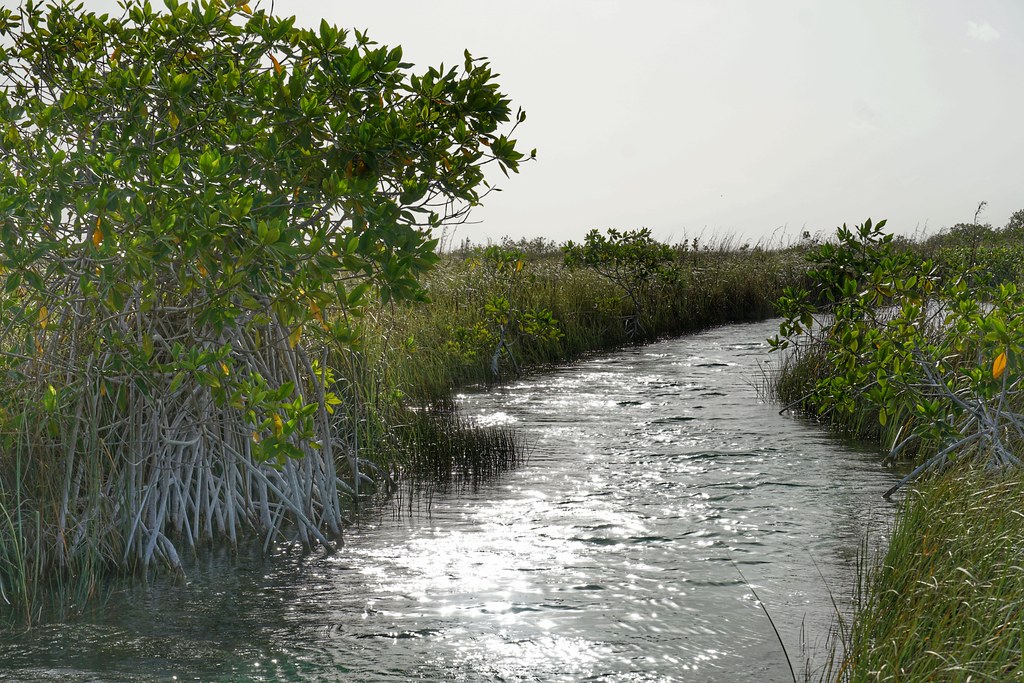 Thousands of years ago the original Maya inhabitants appreciated the exceptional natural beauty of this stretch of coastline, naming it Sian Ka´an, or “Origin of the Sky”. Located on the Eastern coast of the Yucatan Peninsula in the State of Quintana Roo, Sian Ka´an is one of Mexico’s largest protected areas, established to manage 528,148 hectares of intricately linked marine, coastal and terrestrial ecosystems. Along its roughly 120 kilometres of coastline, the property covers over 400,000 hectares of land ranging from sea level to only ten m.a.s.l. The property boasts diverse tropical forests, palm savannah, one of the most pristine wetlands in the region, lagoons, extensive mangrove stands, as well as sandy beaches and dunes. The 120,000 hectares of marine area protect a valuable part of the Mesoamerican Barrier Reef and seagrass beds in the shallow bays. The lush green of the forests and the many shades of blue of the lagoons and the Caribbean Sea under a wide sky offer fascinating visual impressions.

The diversity of life in Sian Ka’an is exceptional. The tropical forests are home to charismatic mammals such as Jaguar, Puma, Ocelot and Central American Tapir. The property also provides habitat for a large number of resident and migratory bird species. There is a great diversity of marine life, including the West Indian Manatee, four species of nesting marine turtles and hundreds of fish species. About a third of the property is comprised of highly diverse and productive mangrove communities, of vital importance to fisheries in the broader region. Hundreds of forested islands, locally known as “Petenes”, emerge from the flooded marshes, some reaching over a kilometre in diameter. A geological, biological and cultural particularity are the “Cenotes”, deep natural sinkholes harbouring fascinating life forms, many of them endemic. This karst phenomenon results from collapsing limestone exposing groundwater.

Criterion (vii): The aesthetics and beauty of Sian Ka´an derive from the relatively undisturbed interface of sea and land along a well-conserved coastline. The mosaic of landscape elements is diverse in shapes, forms and colours allowing intriguing views and impressions. Noteworthy and rare natural phenomena include the “Cenotes”, water-filled natural sinkholes hosting specialised communities of life and the “Petenes”, tree islands emerging from the swamps. Both are connected by underground freshwater systems, jointly forming an invaluable and fragile treasure for future generations.

Criterion (x): The scale and conservation status of Sian Ka’an and its ecosystem diversity support a fascinating range of life forms. Over 850 vascular plants, including 120 woody species, have been confirmed in what is assumed to be a still incomplete inventory. In terms of fauna, noteworthy representatives among the more than 100 documented mammals include endangered species like Black-handed Spider Monkey, Yucatan Black Howler Monkey and the Central American Tapir. A small population of the vulnerable West Indian Manatee occurs in the coastal waters. Some 330 bird species have been recorded, 219 of them breeding in Sian Ka’an. Amphibians and reptiles are represented by more than 40 recorded species, among them the vulnerable American Crocodile and four of the six turtle species found along the Mexican coast, all reproducing within the property. The isolation of some of the “Cenotes” led to the evolution of several species which are locally endemic to single sinkholes. With some 80 recorded species of reef-building coral the portion of the Mesoamerican Reef within the property is one of the richest in Mexico. Jointly with the many other aquatic habitats it harbours more than 400 species of fish and a wealth of other marine life.

Felipe Carrillo Puerto is the municipal seat and largest city in Felipe Carrillo Puerto Municipality in the Mexican state of Quintana Roo. According to the 2010 census, the city’s population was 25,744 persons, mostly of Maya descent. The city of Felipe Carrillo Puerto was founded in 1850 by independent Maya people during the Caste War of Yucatán under the name Chan Santa Cruz. After it was conquered by Mexican troops in 1901, it was renamed “Santa Cruz del Bravo” before acquiring its present name. The Sian Ka’an Biosphere Reserve lies just east of the city [read more].

Playa del Carmen, or just “Playa” as it is also commonly referred to by locals, is a coastal resort town in Quintana Roo on the Yucatán Peninsula of Mexico. Approximately 70 km south of Cancún and 20 km west of Cozumel island, it is at the center of the Mayan Riviera and offers a more relaxed atmosphere and smaller boutique lodgings. Playa del Carmen is less internationally recognized than its northern sister city, Cancun. However, this comes with many added benefits. Unlike Cancun, which has a reputation of being incredibly touristy, Playa del Carmen retains an authentic Mexican feel due to its smaller size despite still being a tourist destination. Also, Playa del Carmen can be far less crowded and hectic than Cancun year-round. The resorts and hotels are also much newer in Playa del Carmen. To summarize, anything one can find in Cancun – be it gorgeous beaches, great nightlife, or delicious cuisine – one can also find in Playa del Carmen, but in a much more authentic and relaxed environment [read more].

Cancún is a popular Caribbean tourist destination on the northeast tip of Mexico’s Yucatán Peninsula, in Quintana Roo, which also is called the Mexican Caribbean. Next to 22 km (14 miles) of beaches, you’ll find a wide variety of resorts, spas, clubs, and malls. Peak season in Cancún tends to run from December to April. Airfare and hotel prices increase dramatically during these times, while dropping in the (northern hemisphere) summer and early autumn months. Late June is especially hot, so come prepared or try the off season. Hurricanes can be a major threat in late (northern hemisphere) summer and autumn. Resting on the northeast corner of the Mexican Caribbean, Cancún, now a city of over 700,000 inhabitants, literally did not exist before the 1970s. It was a tourist project started at that time by the Mexican government in a sparsely inhabited, pristine area. Since then it has grown to become a big city and one of the premier beach resort destinations in the world [read more].