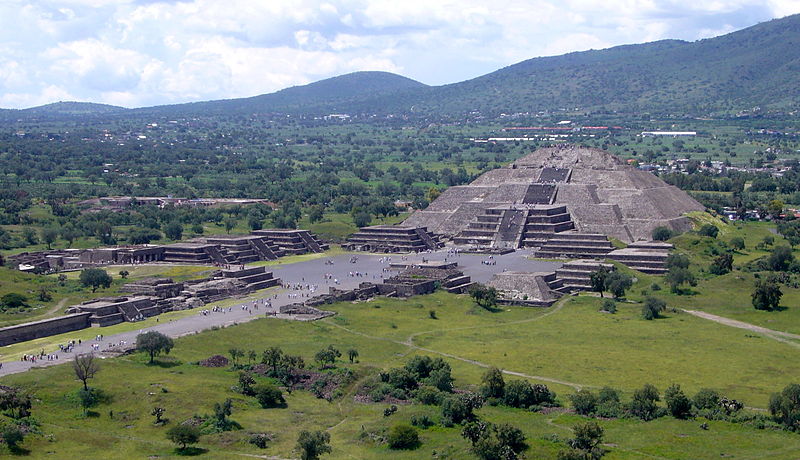 The holy city of Teotihuacan (‘the place where the gods were created’) is situated some 50 km north-east of Mexico City. Built between the 1st and 7th centuries A.D., it is characterized by the vast size of its monuments – in particular, the Temple of Quetzalcoatl and the Pyramids of the Sun and the Moon, laid out on geometric and symbolic principles. As one of the most powerful cultural centres in Mesoamerica, Teotihuacan extended its cultural and artistic influence throughout the region, and even beyond.

Temple of the Feathered Serpent (Arian Zwegers/Wikipedia, CC BY 2.0).

Teotihuacan and its valley bear unique testimony to the pre-urban structures of ancient Mexico. Human occupation of the valley of Teotihuacan began before the Christian era, but it was only between the 1st and the 7th centuries A.D. that the settlement developed into one of the largest ancient cities in the Americas, with at least 25,000 inhabitants.

The city’s urban plan integrated natural elements of the Teotihuacan Valley, such as the San Juan River, whose course was altered to cross the Avenue of the Dead. This north-south oriented main reference axis of the city is lined with monumental buildings and complexes, from which the Pyramids of the Sun and the Moon, as well as the Great Compound with the Temple of Quetzalcoatl (also known as Temple of the Plumed Serpent) stand out. One characteristic of the city’s civil and religious architecture is the “talud-tablero”, which became a distinctive feature of this culture. Furthermore, a considerable number of buildings were decorated with wall paintings where elements of worldview and the environment of that time were materialized. The city is considered a model of urbanization and large-scale planning, which greatly influenced the conceptions of contemporary and subsequent cultures.

At the peak of its development the city stretched out over 36 km2. Outside the ceremonial centre, which, despite its imposing size, represents only 10% of the total surface, excavations have revealed palaces and residential quarters that are of great interest at, for example, La Ventilla, Tetitla, Zacuala, and Yayahuala to the west, and Xala and Tepantitla to the east. The city was razed by fire and subsequently abandoned during the 7th century.

Criterion (i): The ceremonial ensemble of Teotihuacan represents a unique artistic achievement as much by the enormous size of the monuments (the Pyramid of the Sun, built on a 350 m² terrace, measures 225 x 222 meters at the base, and is 75 meters high, for a total volume of 1 million m³) as by the strictness of a layout based on cosmic harmony. The art of Teotihuacans was the most developed among the classic civilizations of Mexico. Here it is expressed in its successive and complementary aspects: the dry and obsessive geometry of the pyramids of the Sun and the Moon contrasts with the sculpted and the painted decor of an exceptional richness of the Pyramid of Quetzalcoatl, the Plumed Serpent.

Criterion (ii): The influence of the first of the great civilizations of Mesoamerican classic civilizations was exerted over the whole of the central region of Mexico, in Yucatán, and as far away as Guatemala (the site of Kaminaljuyu) during the period of Teotihuacan III.

Criterion (iii): Much larger than the narrow zone of the ceremonial center, the archaeological site of Teotihuacan corresponds to a city of at least 25,000 inhabitants. Teotihuacan and its valley bear unique testimony on the pre-urban structures of ancient Mexico.

Criterion (iv): Lining the immense Avenue of the Dead, the unique group of sacred monuments and places of worship in Teotihuacan (the Pyramids of the Sun, the Moon and Quetzalcoatl and the Palaces of Quetzalmariposa, the Jaguars, of Yayahuala and others) constitutes an outstanding example of a pre-Columbian ceremonial center.

Criterion (vi): Following the destruction and abandonment of the city towards 650 A.D., the ruins were imbued with legend. The Aztec name of Teotihuacán means “the place where gods were created”. According to writings from the 16th century, the sacrifices practiced by Moctezuma every twenty days on the site attested to the persistence of beliefs, which made Teotihuacan a sacred place of exceptional value.

Ecatepec, once officially Ecatepec de Morelos, is a city and municipality in the State of Mexico. Both are usually known simply as “Ecatepec”. The city is practically co-extensive with the municipality, with the city’s 2005 population of 1,687,549 being 99.9% of the total municipal population of 1,688,258. The provisional population at the 2010 Census was 1,658,806. It is Mexico’s second most populous municipality. The name “Ecatepec” is derived from Nahuatl, and means “windy hill” or “hill devoted to Ehecatl.” It was also an alternative name or invocation to Quetzalcoatl. “Morelos” is the last name of José María Morelos, a hero of the Mexican War of Independence. The Mexico City metro subway system was extended into Ecatepec. “San Cristóbal” (Saint Christopher) is the city’s patron saint. His feast day is celebrated on July 25 each year. Points of interest include the newest Catholic Cathedral in Mexico, Sagrado Corazón de Jesús, several colonial era churches and the colonel edifice :”Casa de los Virreyes” [read more].

Mexico City (Spanish: México, Ciudad de México or CDMX) is Mexico’s capital and the newest of the 32 states of Mexico. Prior to receiving statehood in 2016 it was also known as the Distrito Federal or D.F. The city center is built on the ruins of the Aztec capital Tenochtitlan, and later came to be the capital of New Spain, which included much of North America. The city has grown fast in the 20th century, and is today North America’s largest city (and the world’s largest Spanish-speaking city) with 8.9 million inhabitants in the city proper, and more than 20 million in the urban area. The city is administratively divided into 16 delegaciones (boroughs) which are in turn subdivided into colonias (neighborhoods), of which there are around 2150; however, it is better to think of the city in terms of districts to facilitate the visitor getting around. Many older towns like Coyoacán, San Angel and Tlalpan got merged into the urban sprawl, and each of these still manages to preserve some of their original and unique characteristics [read more].

Puebla is a city in Mexico. It is in the Puebla Valley, surrounded by volcanoes and snow-capped mountains, slightly over 110 km (68 miles) south-east of Mexico City. The city of Puebla is the fourth largest city in Mexico with 2.1 million inhabitants and the Capital of the State of Puebla. It was founded on April 16, 1531 as “La Puebla de los Ángeles”. It was the first city in central Mexico founded by the Spanish conquistadors that was not built upon the ruins of a conquered Amerindian settlement. Its strategic location, halfway between the port of Veracruz and Mexico City, made it the second most important city during the colonial period. During the seventeenth century, Sor Juana Inés de la Cruz lived in the city until her confrontation with the Bishop of Puebla. The city’s main claim to fame, however, is Cinco de Mayo, a festival commemorating the May 5, 1862 defeat of a French expeditionary army by Mexican general Ignacio Zaragoza [read more].