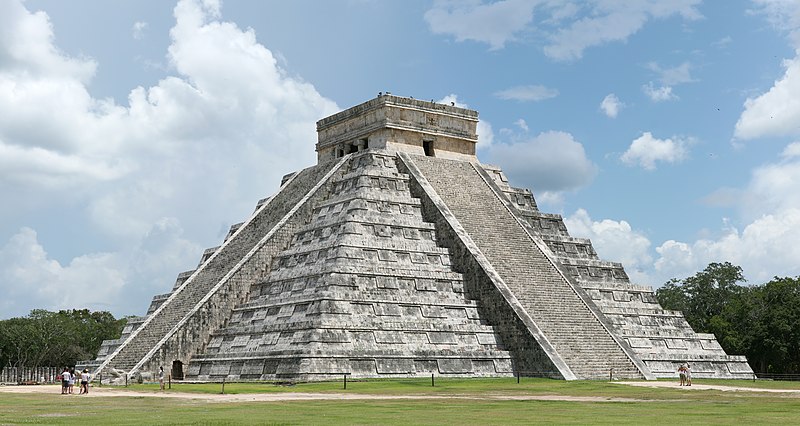 This sacred site was one of the greatest Mayan centres of the Yucatán peninsula. Throughout its nearly 1,000-year history, different peoples have left their mark on the city. The Maya and Toltec vision of the world and the universe is revealed in their stone monuments and artistic works. The fusion of Mayan construction techniques with new elements from central Mexico make Chichen-Itza one of the most important examples of the Mayan-Toltec civilization in Yucatán. Several buildings have survived, such as the Warriors’ Temple, El Castillo and the circular observatory known as El Caracol.

The town of Chichen-Itza was established during the Classic period close to two natural cavities (cenotes or chenes), which gave the town its name “At the edge of the well of the Itzaes”. The cenotes facilitated tapping the underground waters of the area. The dates for this settlement vary according to subsequent local accounts: one manuscript gives 415-35 A.D., while others mention 455 A.D. The town that grew up around the sector known as Chichen Viejo already boasted important monuments of great interest: the Nunnery, the Church, Akab Dzib, Chichan Chob, the Temple of the Panels and the Temple of the Deer. They were constructed between the 6th and the 10th centuries in the characteristic Maya style then popular both in the northern and southern areas of the Puuc hills.

The second settlement of Chichen-Itza, and the most important for historians, corresponded to the migration of Toltec warriors from the Mexican plateau towards the south during the 10th century. According to the most common version, the King of Tula, Ce Acatl Topiltzin Quetzalcoatl, or Kukulkan as the Maya translated the name, reportedly took the city between 967 A.D. and 987 A.D.

Following the conquest of Yucatán a new style blending the Maya and Toltec traditions developed, symbolizing the phenomenon of acculturation. Chichen-Itza is a clear illustration of this fusion. Specific examples are, in the group of buildings to the south, the Caracol, a circular stellar observatory whose spiral staircase accounts for its name, and, to the north, El Castillo (also known as the Temple of Kukulkan). Surrounding El Castillo are terraces where the major monumental complexes were built: on the north-west are the Great Ball Court, Tzompantli or the Skull Wall, the temple known as the Jaguar Temple, and the House of Eagles; on the north-east are the Temple of the Warriors, the Group of the Thousand Columns, the Market and the Great Ball Court; on the south-west is the Tomb of the High Priest.

After the 13th century no major monuments seem to have been constructed at Chichen-Itza and the city rapidly declined after around 1440 A.D. The ruins were not excavated until 1841 A.D.

Criterion (i) : The monuments of Chichen-Itza, particularly in the northern group, which includes the Great Ball Court, the Temple of Kukulkan and the Temple of the Warriors, are among the undisputed masterpieces of Mesoamerican architecture because of the beauty of their proportions, the refinement of their construction and the splendor of their sculpted decorations.

Criterion (ii): The monuments of Chichen-Itza exerted an influence throughout the entire Yucatan cultural zone from the 10th to the 15th century.

Criterion (iii): Chichen-Itza is the most important archaeological vestige of the Maya-Toltec civilization in Yucatan (10th-15th centuries).

Valladolid is a small city in the state of Yucatán. Located about a 45 minute drive from the (lesser-used) east entrance of Chichén Itzá, it offers an alternative base for the ruins, while having its own charms as well — although further from the ruins than the town of Piste, Valladolid is less tourist-oriented and has more historic charm. Valladolid due to its tranquility and small town charm is mostly a one-day getaway. You can visit several Cenotes within the area and two are close enough to hire bicycles from a nearby vendor. Recommended to visit “Cenote Dzinup”, you will love it. As well you can go sightseeing of the architecture and mingle with the people of the city. See Parque Fransisco Canton Rosado, the central town square, is surrounded by pretty colonial style buildings that maintain much of their historic character. The Catedral de San Gervasio, located on the south side of the town square [read more].

Tizimin is a city located in the Tizimín Municipality in the Mexican state of Yucatán, It is located in the Coastal Zone of the same state. It has an average height of 20 meters and is located at a distance of 1,492 km from Mexico City, 167 km from state capital city, Merida, Yucatan, 54 km from Rio Lagartos, 50 km from Valladolid, Yucatan, 36 km from Ek’ Balam and 27 km from Espita. The city is known for its traditional fair of the Biblical Magi, celebrated in late December and early January. It is also a major Mexican handcraft market selling rebozos, huipils, tablecloths, jewelry and guayaberas. This fair gives the city its nickname of “King’s City”. In 2010 was the second largest city in population of the eastern Yucatan, only after Valladolid, Yucatán. It was also the third largest city and fourth largest by number of people around the state [read more].

A short distance — yet seemingly a world away — from the rowdy, touristy beach resorts of Cancún and Cozumel that make up the Yucatán of cliché, Mérida is the cultural center of southern Mexico, boasting a panoply of excellent museums and attractions, a vibrant street life, and a wealth of historic colonial-era architecture (centered on the Plaza de la Independencia in the center of town) that’s second only to Mexico City on the national scene. The capital and largest city of Yucatán state, Mérida is a city of contrasts. You will find elegant hotels, restaurants and malls in the northern part of the city. Downtown, there are hotels and restaurants to suit every budget. A large central market and numerous small shops are found all around the main plaza. Mérida has a rich cultural life which also reflects its diversity. Many free concerts, performances and other events are held daily [read more].