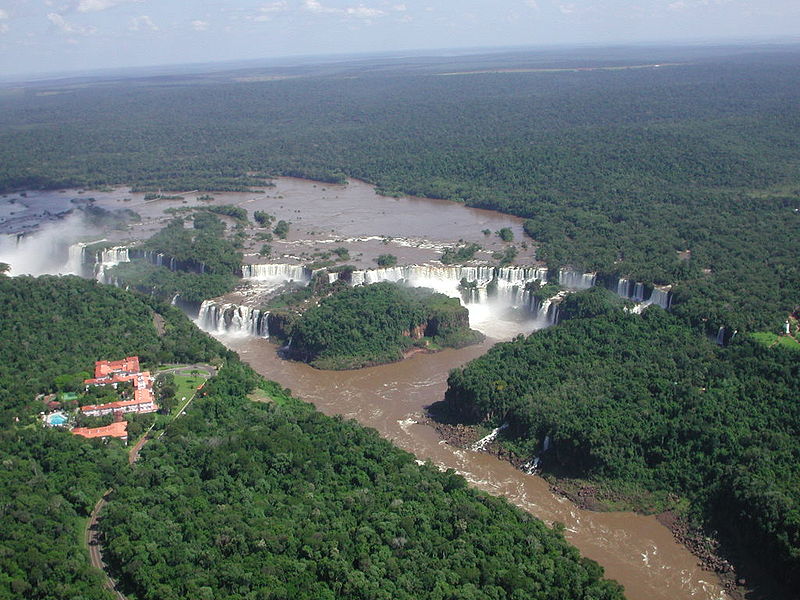 The semicircular waterfall at the heart of this site is some 80 m high and 2,700 m in diameter and is situated on a basaltic line spanning the border between Argentina and Brazil. Made up of many cascades producing vast sprays of water, it is one of the most spectacular waterfalls in the world. The surrounding subtropical rainforest has over 2,000 species of vascular plants and is home to the typical wildlife of the region: tapirs, giant anteaters, howler monkeys, ocelots, jaguars and caymans.

Located in Misiones Province in the Northeastern tip of Argentina and bordering the Brazilian state of Parana to the north, Iguazú National Park, jointly with its sister park Iguaçu in Brazil, is among the world’s visually and acoustically most stunning natural sites for its massive waterfalls. It was inscribed on the World Heritage List in 1984. Across a width of almost three kilometres the Iguazú or Iguaçu River, drops vertically some 80 meters in a series of cataracts. The river, aptly named after the indigenous term for “great water” forms a large bend in the shape of a horseshoe in the heart of the two parks and constitutes the international border between Argentina and Brazil before it flows into the mighty Parana River less than 25 kilometres downriver from the park. Large clouds of spray permanently soak the many river islands and the surrounding riverine forests, creating an extremely humid micro-climate favouring lush and dense sub-tropical vegetation harbouring a diverse fauna.

In addition to its striking natural beauty and the magnificent liaison between land and water Iguazu National Park and the neighbouring property constitute a significant remnant of the Atlantic Forest, one of the most threatened global conservation priorities. This forest biome historically covering large parts of the Brazilian coast and extending into Northern Argentina and Uruguay, as well as Eastern Paraguay, is known for its extreme habitat and species diversity, as well as its high degree of endemism. Around 2000 plant species, including some 80 tree species have been suggested to occur in the property along with around 400 bird species, including the elusive Harpy Eagle. The parks are also home to some several wild cat species and rare species such as the broad-snouted Caiman.

Jointly with contiguous Iguaçu National Park in Brazil, which was inscribed on the World Heritage List in 1986, it constitutes one of the most significant remnants of the so-called Interior Atlantic Forest. Today, the parks are mostly surrounded by a landscape that has been strongly altered due to heavy logging, both historically and into the present, the intensification and expansion of both industrial and small-scale agriculture, plantation forestry for pulp and paper and rural settlements. Jointly, the two sister parks total around 240,000 hectares with this property’s contribution being c. 67,000 hectares.

Criterion (vii):Iguazú National Park and its sister World Heritage property Iguaçu National Park in Brazil conserve one of the largest and most spectacular waterfalls in the world comprised of a system of numerous cascades and rapids and almost three kilometres wide within the setting of a lush and diverse sub-tropical broadleaf forest. The permanent spray from the cataracts forms impressive clouds that soak the forested islands and river banks resulting in a visually stunning and constantly changing interface between land and water.

Criterion (x):Iguazu National Park, together with the contiguous World Heritage property of Iguaçu National Park in Brazil and adjacent protected areas, forms the largest single protected remnant of the Paranaense subtropical rainforest, which belongs to the Interior Atlantic Forest. The rich biodiversity includes over 2000 species of plants, 400 species of birds and possibly as many as 80 mammals, as well as countless invertebrate species.

Puerto Iguazú is a tourist city in the northeast of Argentina at the Triborder with Paraguay and Brazil. It mainly serves the needs of the tourists visiting the Iguaçu Falls close-by. See Three Frontiers Landmark (walk down Av. Tres Fronteras). Have a look at Argentina, Brazil, and Paraguay all at a glimpse, while cargo freighters slowly make their way along the water. Iguaçu Falls . One of the great natural wonders of the world. Güira Oga. Visit a refugee of animals such as the toucan, a caiman and more rescued animals. Visit is with a tour that last nearly 1:30-1:45 hours. They try to nurse them back to nature but since penalties are still almost non-existent, the trade in wildlife in Argentina continues undisturbed. The same bus to the waterfalls can stop there. Jardin de los Picaflores (The Garden of Hummingbirds). Be sure to stop by this beautiful, peaceful little garden which is full of hummingbirds [read more].

Eldorado is a city in the center-northeast of the province of Misiones, Argentina. It has 54,189 inhabitants as per the 2001 census [INDEC], making it the third most populated city in the province, and is the head town of the Eldorado Department. It is located on the left-hand (eastern) banks of the Upper Paraná River, on National Route 12, about 100 km from the Iguazú Falls and 206 km from the provincial capital Posadas, on the Argentina-Paraguay border. Eldorado was founded on 29 September 1919 as a rural settlement and a port on the Paraná by German-born Adolfo Julius Schwelm, naturalised British subject, who named it as a reference to the legend of El Dorado. The town was the center of the European immigrant colonization of the area (which included groups of people from Germany, Switzerland, Poland, Denmark, England, and others). The region’s economy is based on agriculture, producing tung, oranges, grapefruit and yerba mate [read more].

Jardín América is a village and municipality in Misiones Province in north-eastern Argentina. It is not the head city of the San Ignacio department, however, it is the largest city in the department. It is located 1.141 km north of Buenos Aires and 104 km from Posadas (capital city of the Misiones Province), on the eastern shore of the Paraná River. Saltos del Tabay is a municipal camping area where the main attraction is a set of natural waterfalls on the Tabay stream. It is placed near to Jardín América city (approx. 5 km) and has available several services for the tourists: accommodations, tents zone, restaurant, markets, natural swimming pool, sport areas, etc [read more].