Historic Quarter of the Seaport City of Valparaíso 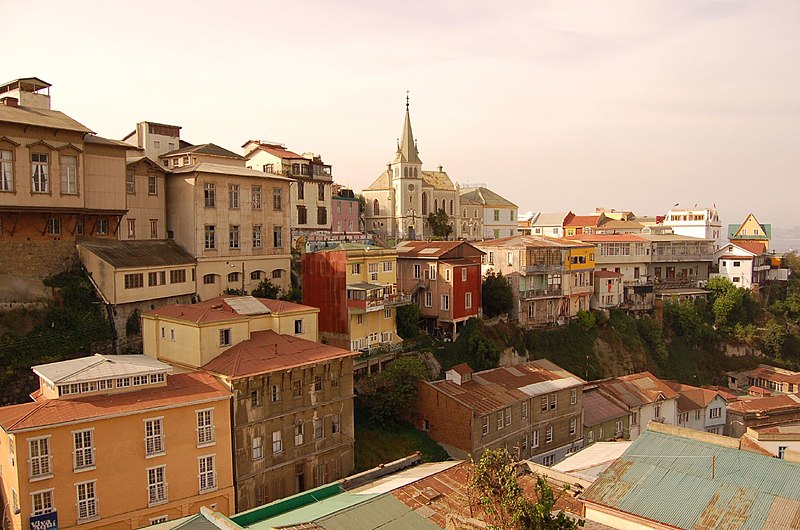 The colonial city of Valparaíso presents an excellent example of late 19th-century urban and architectural development in Latin America. In its natural amphitheatre-like setting, the city is characterized by a vernacular urban fabric adapted to the hillsides that are dotted with a great variety of church spires. It contrasts with the geometrical layout utilized in the plain. The city has well preserved its interesting early industrial infrastructures, such as the numerous ‘elevators’ on the steep hillsides.

Located on central Chile’s Pacific coast, the Historic Quarter of the Seaport City of Valparaíso represents an extraordinary example of industrial-age heritage associated with the international sea trade of the late 19th and early 20th centuries. The city was the first and most important merchant port on the sea routes of the Pacific coast of South America that linked the Atlantic and Pacific oceans via the Strait of Magellan. It had a major commercial impact on its region from the 1880s until the opening of the Panama Canal in 1914. After this date its development slowed, allowing its harbour and distinctive urban fabric to survive as an exceptional testimony to the early phase of globalisation.

Valparaíso’s historic quarter is located on the coastal plain and part way up the steep surrounding hills, where the city first developed. It is composed of five interlaced neighbourhoods: La Matriz Church and Santo Domingo Square, located between the hills and the plain and comprised of the church and late 19th-century buildings typical of the seaport architecture; Echaurren Square and Serrano Street, predominantly commercial in character and marked by the presence of the Port Market, commercial establishments and active street trade; Prat Pier and Sotomayor and Justicia squares, comprising the main transversal axis of the area and containing the largest public spaces; the Prat Street and Turri Square area around the foothill, featuring a number of examples of monumental architecture; and the two hills of Cerro Alegre and Cerro Concepción, a single neighbourhood planned and developed to a large extent by German and English immigrants, with squares, viewing points, promenades, alleyways, stairways and the top stations of some of Valparaíso’s distinctive funicular elevators.

The outstanding nature of the historic quarter of Valparaíso results from a combination of three factors, all associated with its role as a port: its particular geographical and topographical environment; its urban forms, layout, infrastructure and architecture; and its attraction to and influence by people from around the world. The character of Valparaíso was strongly marked by the geography of its location: the bay, the narrow coastal plains (largely artificial) and the steep hills scored by multiple ravines together created the city’s amphitheatre-like layout. Adaptation of the built environment to these difficult geographical conditions produced an innovative and creative urban ensemble that stressed the particularities of each architectural object, grounded in the technological and entrepreneurial mindset typical of the era. Consistent with its pre-eminence, the city was populated and influenced by people from around the world. The urban fabric and cultural identity of Valparaíso are thus distinguished by a diversity that sets it apart from other Latin American cities. From an urban perspective, the result of this challenging geography, modernizing impulse and intercultural dialogue is a fully original American city with the stamp of the late 19th century upon it.

Criterion (iii) Valparaíso is an exceptional testimony to the early phase of globalisation in the late 19th century, when it became the leading commercial port on the sea routes of the Pacific coast of South America.

Valparaíso is a city of almost 300,000 people (2017) on the Pacific coast of Central Chile. Frequently referred to as simply Valpo, it is about 120 km west of the capital, Santiago de Chile. The city is widely known for its bohemian culture, brightly colored houses, and beautiful seaside views. Valparaiso is an important port town, and has been for hundreds of years, resulting in its being made a UNESCO World Heritage Site in 2003. Its location on the shipping routes before the completion of the Panama Canal, has left a legacy that still can be seen in various features of the old port town. Its location in the earthquake zone, and the disastrous earthquake of 1906, is another legacy. There have been more recent earthquakes as well. The old town is surrounded with features that reflect the rich maritime heritage, and an important location of Chilean national pride – where its naval mastery was challenged and maintained [read more].

Santiago is the capital and economic center of Chile. With its many museums, events, theaters, restaurants, bars and other entertainment and cultural opportunities, it is also the political and cultural center of the country. Its central location in the country makes it a great base for visiting other areas, and it is possible to ski in the nearby Andes and later be on the beach in the same day. Santiago is a fast-growing city in the Santiago Región Metropolitana, in the central valley of Chile between the Andes mountain range to the east and the Coastal Range to the west. The metropolitan area has about 7 million inhabitants. Founded in 1541 as Santiago de Nueva Extremadura by the Spaniard Pedro de Valdivia, it has been the heart of the country since colonial times and has evolved to the cosmopolitan city it is today. For visitors it’s both the gateway to the country and a destination in its own right with an eclectic architecture, a vibrant culinary and cultural scene, surrounded by the mighty Andes welcoming skiers, trekkers and friends of wine [read more].

Rancagua, on the shore of Cachapoal River about 85 km south of Santiago de Chile, is the capital of the VI Region of Chile. The city has a population of approximately 230,000 (2012). For most of the 20th century the principal economic activities of the region were (and in large part still are) the extraction and manufacturing of copper (El Teniente mine), and agriculture. See Paseo Independencia – The city’s commercial backbone is also a nice pedestrian avenue to eat, shop, and stroll. Beware however during the Christmas holidays, when the atmosphere gets dense and pickpockets become ambitious. Plaza de los Héroes – Located at the east terminus of the Paseo Independencia, this central plaza is a nice place to relax anytime. Avoid gypsies who will literally tease the cash out of your pockets. Teatro Regional Rancagua – The Regional Theater of Rancagua has established itself as the space of culture and arts in the O’Higgins Region, with more than 356 shows, 210 thousand spectators, 96 free shows and 8 opera shows [read more].