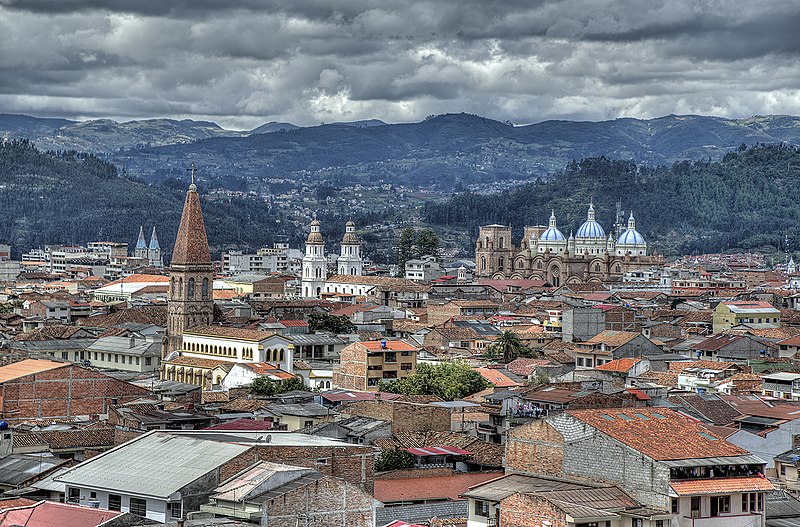 Santa Ana de los Ríos de Cuenca is set in a valley surrounded by the Andean mountains in the south of Ecuador. This inland colonial town (entroterra ), now the country’s third city, was founded in 1557 on the rigorous planning guidelines issued 30 years earlier by the Spanish king Charles V. Cuenca still observes the formal orthogonal town plan that it has respected for 400 years. One of the region’s agricultural and administrative centres, it has been a melting pot for local and immigrant populations. Cuenca’s architecture, much of which dates from the 18th century, was ‘modernized’ in the economic prosperity of the 19th century as the city became a major exporter of quinine, straw hats and other products. 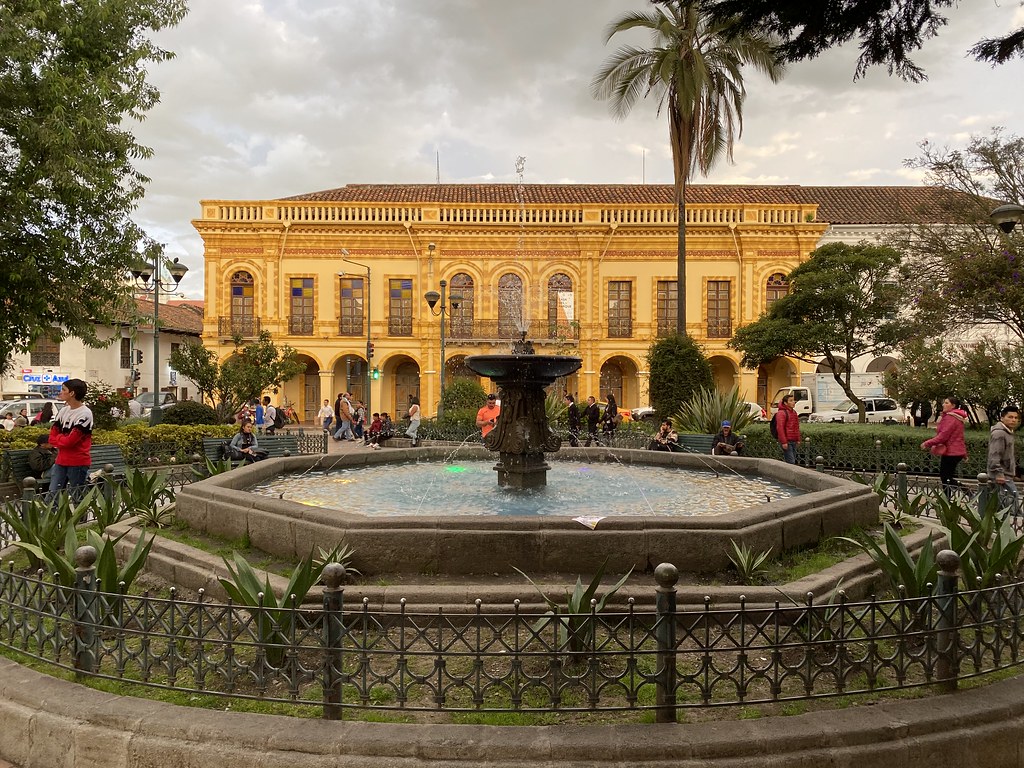 Located in the heart of the Andean mountains, the town of Cuenca is entrenched in a valley irrigated by four rivers: Tomebamba, Yanuncay, Tarqui and Machangara. This location has over a long period of time favoured close contact with the natural environment. The Historic Centre of Santa Ana de los Rios de Cuenca includes the territory that was occupied by the town of Cuenca until the first half of the 20th century, as well as the archaeological site of Pumapungo and the corridors that include the ancient access routes to the town.

The Historic Centre of Santa Ana de los Rios de Cuenca is a remarkable example of a planned inland Spanish town (entroterra) that bears witness to the interest given to the principles of Renaissance urban planning in the Americas.  Founded in 1577 according to the guidelines issued thirty years earlier by the King of Spain, Charles V, it has preserved over four centuries its original orthogonal plan.

An Indian community was in existence at the time of the arrival of the Spanish, (Inca-Canari); from this time on the character of the town of Cuenca was determined.  The urban layout and the townscape of its historic centre, corresponding to colonial towns located in the interior of the land with an agricultural vocation, clearly bears witness to the successful fusion of the different societies and cultures of Latin America.

The urban fabric of the Historic Centre of Santa Ana de los Rios de Cuenca comprises a system of parks, squares, atriums, churches and other public spaces. Around the Plaza Mayor (Park Abdon Calderon), the three powers of society are always present: political with the town hall and the Governor’s Office, religious, with its two cathedrals opposite one another and the judiciary with the Law Courts.  Its paved streets are wide and sunlit. Moreover, the simple colonial houses have often been transformed into more important residences, especially during the period of relative economic expansion due to the production and exportation of quinine and straw hats (19th century). This resulted in a specific architecture that integrated the diverse local and European influences.

A few buildings merit mention: the New Cathedral, begun in 1885, the Old Cathedral, the Carmelite Monastery and Santo Domingo Church. The religious architecture, closely related to public areas, where community life is expressed, greatly contributes to the urban profile of the town.

The vernacular architecture illustrating the techniques and organization of space during the colonial period is principally located in the periphery of the historic centre and in the rural areas. A strong concentration of this type of architecture is located along the River Tomebanba (el Barranco) that defines the boundaries of the historic town on the south side. It is also in this sector that the site of Pumapungo is located (Puma Gate) in the heart of the Inca town of Tomebamba, and that of Todos Santos (All Saints) where the vestiges corresponding  to Canari, Inca and Spanish cultures have been unearthed by archaeologists.

Criterion (ii): Cuenca illustrates the perfect implantation of the principles of urban planning of the Renaissance in the Americas.

Criterion (iv): The successful fusion of the different societies and cultures of Latin America is symbolized in a striking manner by the layout and townscape of Cuenca.

Cuenca is a vibrant colonial city in southern Ecuador, the third largest in the country, and the capital of Azuay Province. The city is located in a highland valley at about 2,500 m (8,200 ft) above sea level, and is home to 518,000 people according to the 2010 census. Its moderate climate makes it enjoyable year round. The center of the city is listed as a UNESCO World Heritage Site site because of its many historical buildings. Everywhere you look in Cuenca, there are flowers, blooming trees, grass and rushing waters. Cuenca is surrounded by mountains on all sides, with passes to the west, south and east. From downtown, looking southwest, you can see the beautiful Cajas mountains; the majority of this area is protected by the large Cajas National Park (Parque Nacional Cajas), well worth the trip. The city is cleaner and safer than most large cities in developing countries and there are claims it has purer water than most U.S. and European cities [read more].

Azogues is the capital of Azogues Canton and of Cañar Province in Ecuador. The population of Azogues is approximately 40,000. Azogues is located at 2,518 meters above sea level (8,261 feet), its population is of 39,848 inhabitants, its average temperature is 17 °C (63 °F). It is also known for its Panama hat industry (jipi japa); the hats are produced primarily for export. San Francisco Cathedral is the seat of the Roman Catholic Diocese of Azogues (established 1968), split from its present Metropolitan, the Archdiocese of Cuenca. Azogues is well connected on land to Cuenca by via rapida Biblian–Azogues–Cuenca; currently being widened to 6 lanes. It connects to Quito via I35 and to Guayaquil via I40, both newly improved branches of the Pan-American Highway. Azogues uses Mariscal Lamar Regional Airport located in Cuenca. Azogues is the capital of the Cañar Province and the second largest city in the Cuenca Metropolitan Area with 700,000 inhabitants [read more].

Guayaquil is the largest city in Ecuador. Guayaquil is a sea port, and its personality derives much from that fact. Also, the climate is hot and humid. These two factors give the city a ‘Caribbean’ soul, where foreigners are usually well received, tropical music rules and seafood is a must do. An old travel book once counted the attractions in Guayaquil as one: “The Public Cemetery”. Not so, anymore; the city has undergone a great change as a result of great efforts made by the city administrators. Now you can find great parks and green areas all over the city (for example Peñas and the Malecon), and the city has a new look which attracts tourism from inside and outside the country. Guayaquil was founded on July 25, 1538 with the name “Muy Noble y Muy Ciudad de Santiago de Guayaquil” by Spanish Conquistador Francisco de Orellana. Before the city was founded by the Spanish, it was a native village [read more].