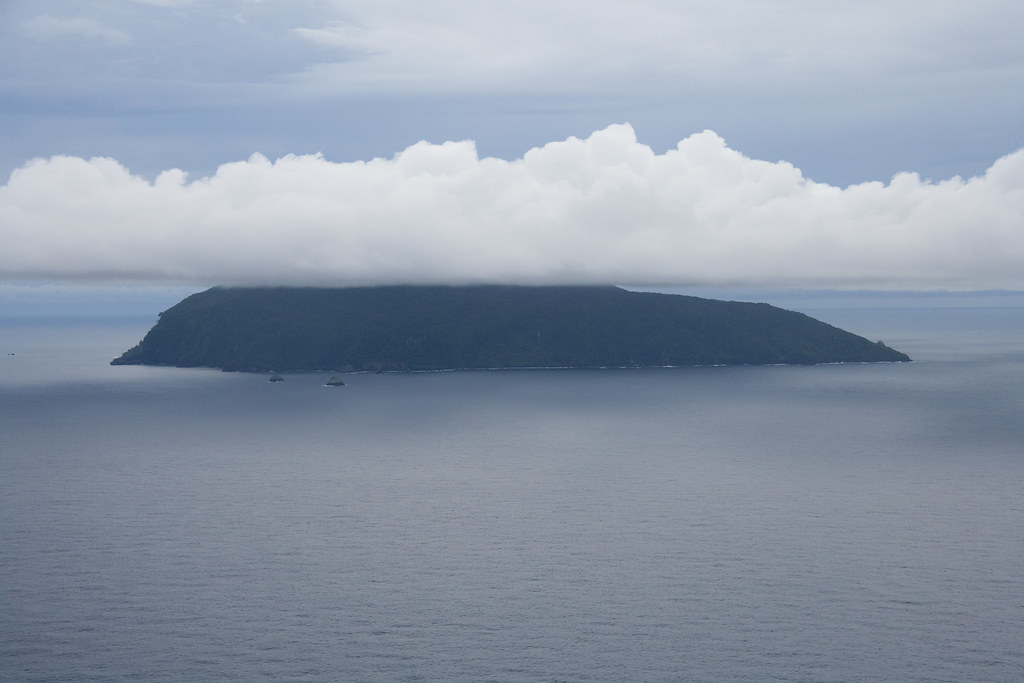 Cocos Island National Park, located 550 km off the Pacific coast of Costa Rica, is the only island in the tropical eastern Pacific with a tropical rainforest. Its position as the first point of contact with the northern equatorial counter-current, and the myriad interactions between the island and the surrounding marine ecosystem, make the area an ideal laboratory for the study of biological processes. The underwater world of the national park has become famous due to the attraction it holds for divers, who rate it as one of the best places in the world to view large pelagic species such as sharks, rays, tuna and dolphins.

A gorgeous waterfall in Cocos Island (Jon Rawlinson/Flickr, CC BY 2.0).

Natural population densities of large top predators indicate a near pristine conservation status of a property that is among the most important sites in the Eastern Tropical Pacific for the protection of large pelagic migratory species, such as the endangered Scalloped Hammerhead Shark and the near-threatened Silky Shark and Galapagos Shark. Due to its geographical position, the oceanic island of volcanic origin is the first landmark met by the North Equatorial Countercurrent and a point of confluence of other marine currents. This makes it a dispersing centre of larvae of marine species from various parts of the Pacific Ocean. In its land portion, the property hosts a remarkable degree of endemism across most diverse taxonomic groups. There are, for instance, three endemic bird species, two endemic freshwater fish and two endemic reptile species. Cocos Island National Park is of irreplaceable global conservation value, reminding us what parts of tropical oceans historically looked like.

Criterion (ix): The property harbours a rare and complex mosaic of land and sea environments, including forested mountains, rivers, waterfalls, estuaries, cliffs, sandy and rocky beaches, bays, and extensive and highly diverse coral reefs and pelagic environments. The oceanic island, more than 500 kilometers off the continent, is mostly occupied by tropical rainforest and, from around 500 m.a.s.l. to the highest elevation at 634 m.a.s.l., by cloud forest. The isolation has been allowing ongoing evolutionary processes on land, giving origin to countless endemic species in the most diverse taxonomic groups, including several vertebrate species. The geographic location at the meeting point of the North Equatorial Countercurrent with other major marine currents and the ecological interactions between a remote island and the surrounding marine ecosystems are of major scientific importance. The currents and the island affect the movements and distribution of the many migratory marine species aggregating for feeding and reproduction in the waters around the island. The property serves as a dispersion centre of larvae of numerous marine species coming from the entire Pacific. The islets and rocks around the main island are reported to also serve as important cleaning stations, i.e. pelagic species aggregate to have parasites removed by specialised fish and other species.

Criterion (x): The small island supports the only tropical forest ecosystem located on an oceanic island within the Tropical Eastern Pacific. It is home to some 70 endemic species of vascular plants and several endemic animals, including three birds, two reptiles and even two freshwater fish. Smaller satellite rocks around the island support nesting and resting habitats for numerous migratory and resident bird species. However, the main species conservation value derives from critical marine habitat and the corresponding role of the property in the conservation of large pelagic species, especially several species of sharks. Among the latter are exceptional aggregations of the near-threatened Silky and Lemon Shark, the vulnerable Bigeye Thresher Shark and Galapagos Shark, the emblematic and endangered Hammerhead Shark, as well as White-tip Reef Shark and Black-tip Shark. Among some 300 recorded fish species are important aggregations of large pelagic fish, such as the vulnerable Whale Shark and Blue Marlin, as well as Sailfish Broadbill Swordfish, Shortbill Spearfish, Giant Manta Ray and Pelagic Stingray. Blue Whale and Bottlenose Dolphin are among the visiting marine mammals.

Cocos Island is a nationally protected jungle-covered island and national park off the coast of Costa Rica. It’s also a UNESCO World Heritage site. Cocos Island is in the Eastern Tropical Pacific approximately 300 mi (480 km) southwest of Cabo Blanco, Costa Rica. A rugged and incredibly beautiful island, today Cocos Island is the most sacred National park in Costa Rica’s extensive park system. Among Cocos Island’s many attributes is a startling degree of biodiversity. This island’s world-renowned waters explode with life, including innumerable white tip reef sharks, schooling hammerhead sharks, dolphins, mantas and marbled rays, giant moray eels, sailfish, and of course the occasional whale shark. Other common encounters are large schools of jacks and tuna, silky sharks, silver tip sharks, marlin, Creole fish, green turtles and octopus. On the Island you will encounter a lot of pigs and not much else besides the usual vegetation. The island is supposed to hold three of the largest treasure troves of all time [read more].