Situated in the Peruvian Andes, Cuzco developed, under the Inca ruler Pachacutec, into a complex urban centre with distinct religious and administrative functions. It was surrounded by clearly delineated areas for agricultural, artisan and industrial production. When the Spaniards conquered it in the 16th century, they preserved the basic structure but built Baroque churches and palaces over the ruins of the Inca city. 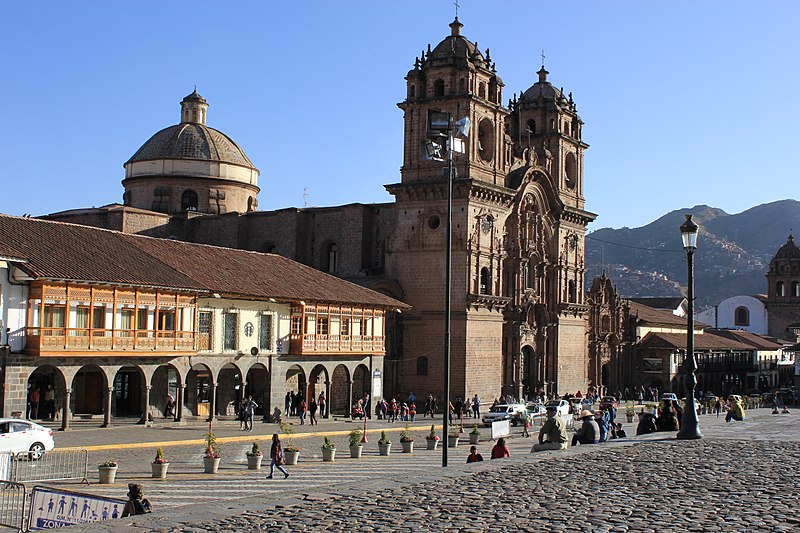 The City of Cuzco, at 3,400 m above sea level, is located in a fertile alluvial valley fed by several rivers in the heart of the Central Peruvian Andes of South America. Under the rule of Inca Pachacuteq (Tito Cusi Inca Yupanqui), in the 15th century, the city was redesigned and remodelled after a pre-Inca occupation process of over 3,000 years, and became the capital of the Tawantinsuyu Inca Empire, which covered much of the South American Andes between the 15th and 16th centuries AD.

The Imperial city of the Incas was developed as a complex urban centre with distinct religious and administrative functions which were perfectly defined, distributed and organized. The religious and government buildings were accompanied by the exclusive abodes for royal families, forming an unprecedented symbolic urban compound, which shows a stone construction technology with exceptional aesthetic and structural properties, such as the Temple of the Sun or Qoricancha, the Aqllahuasi, the Sunturcancha, the Kusicancha and a series of very finely finished buildings that shape the Inca compound as an indivisible unity of Inca urbanism. The noble city was clearly isolated from the clearly delineated areas for agricultural, artisan and industrial production as well as from the surrounding neighbourhoods. The pre-Hispanic patterns and buildings that shaped the Imperial city of the Incas are visible today.

With the Spanish conquest in the 16th century, the urban structure of the Inca imperial city of Cuzco was preserved and temples, monasteries and manor houses were built over the Inca city. They were mostly of baroque style with local adaptations, which created a unique and high quality mixed configuration representing the initial juxtaposition and fusion of different periods and cultures, as well as the city’s historic continuity. The city’s remarkable syncretism is evident not only in its physical structure but also in the Viceroyalty’s artistic expression. It became one of the most important centres of religious art creation and production in the continent. It is also important for its population’s customs and traditions, many of which still keep their ancestral origins. From its complex past, woven with significant events and beautiful legends, the city has retained a remarkable monumental ensemble and coherence and is today an amazing amalgam of the Inca capital and the colonial city. Of the first, it preserves impressive vestiges, especially its plan: walls of meticulously cut granite or andesite, rectilinear streets running within the walls, and the ruins of the Sun Temple. Of the colonial city, there remain the freshly whitewashed squat houses, the palace and the marvellous Baroque churches which achieved the impossible fusion of the Plateresco, Mudejar or Churrigueresco styles with that of the Inca tradition.

Criterion (iii): The City of Cuzco is a unique testimony of the ancient Inca civilization, heart of Tawantinsuyu imperial government, which exercised political, religious and administrative control over much of the South American Andes between the 15th and 16th centuries. The city represents the sum of 3,000 years of indigenous and autonomous cultural development in the Peruvian southern Andes.

Criterion (iv) : The City of Cuzco provides a unique testimony to the urban and architectural achievements of important political, economic and cultural settlements during the pre-Columbian era in South America. It is a representative and exceptional example of the confluence of two distinct cultures; Inca and Hispanic, which through the centuries produced an outstanding cultural syncretism and configured a unique urban structure and architectural form.

Cuzco or Cusco (Qosqo in Quechua, Cusco in Spanish), in the Southern Sierras, is a fascinating city that was the capital of the Inca Empire. Cuzco is a UNESCO World Heritage Site and is one of Peru’s most visited cities as it is the largest and most comfortable city from which tourists can begin visits to Machu Picchu, the Sacred Valley of the Incas, and other Inca sites in the region. Cuzco is a beautiful city with well-preserved colonial architecture, evidence of a rich and complex history. The city is the center of indigenous Quechua culture in the Andes, and walking the streets you see the layers of history. Spanish colonial buildings erected directly atop Inca walls line the square, while the modern tourist nightlife flourishes in their midst. The city is surrounded by a number of ruins, the most impressive being Sacsayhuaman, the site of the 1536 battle in which dozens of Pizarro’s men charged uphill to battle the forces of the Inca [read more].

Abancay is in the department of Apurimac, Peru in a valley over the Pachachaca river. The population is 58,000, and with an altitude of 2,378 m. Abancay is part of Peru’s Southern Sierra. The Tourist Office is next to the Plaza de Armas. All buses on the Lima-Nasca-Cusco Interoceánica Sur line pass through Abancay. The road is well paved. There are daily buses from and to Andahuaylas, one of the closest airports . This journey takes 5 to 6 hours on an unpaved road. The closest airport is in Cusco, a 4½-5 hour drive on a bus or a 3½-4 hour drive in a “colectivo” (taxi car) Distances are short, so walking is your best options for getting around. If you need a taxi, don’t pay more than S/3 (soles) in the city. See AMPAY (mountain and tree species) protected area (sanctuary). Get the collectivo 2 (70 centimos) to Sawanay. From there ask for “camino del ampay” [read more].

Andahuaylas is a city in the Southern Sierra region of Peru. It is the capital of the Andahuaylas Province in the Apurímac Region. It is known as the pradera de los celajes (Spanish for “prairie of colored clouds”). Andahuaylas is in the department of Apurímac. The population is estimated at 42,000 (2017). The altitude is about 3,000m above sea level. The surrounding mountains provide beautiful scenery. There are daily buses from and to Ayacucho. The journey takes at least 10 hard hours on dust road. The views are impressive and since the bus drives very slowly due to the road conditions, you have enough time to look. Andahualas is a very long town, spread out along the river. If you’re coming from Ayacucho, don’t be concerned if it drops people off in what looks like the center of town, and the bus continues beyond. You’ll soon reach the bus terminal, which is actually close to the real center of town [read more].