Canaima National Park is spread over 3 million ha in south-eastern Venezuela along the border between Guyana and Brazil. Roughly 65% of the park is covered by table mountain (tepui) formations. The tepuis constitute a unique biogeological entity and are of great geological interest. The sheer cliffs and waterfalls, including the world’s highest (1,000 m), form a spectacular landscape. 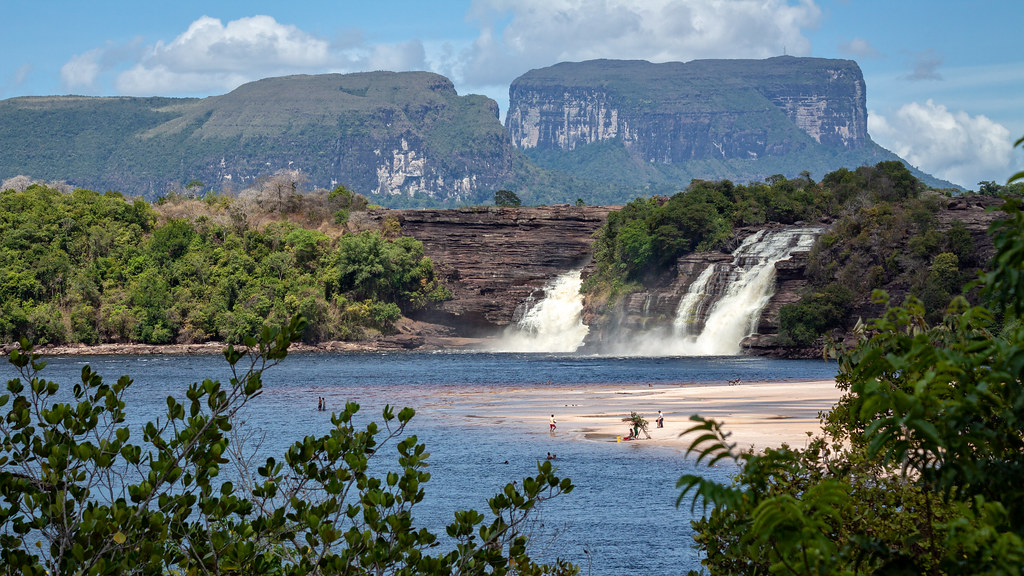 Santa Elena de Uairén is a small frontier town in La Gran Sabana in Venezuela. It’s home to several indigenous groups, and children are educated not only in Spanish but also Pemon, an indigenous language. Its proximity to the border with Brazil makes it a busy trade town… mostly importing products from Brazil, and exporting oil from Venezuela. Flights to and from the airport are operated with small Cessna aircraft. Schedules change frequently. There are very few flights to Santa Elena de Uairén. Rutaca is the only airline that services the town with any regularity from Ciudad Bolívar and Puerto Ordaz. You should contact the airline at the Ciudad Bolívar Airport +58 285 632-4465 / 632-8426 to find out more information about the flights. They should direct you with information on how to book. Night buses go to Santa Elena from Ciudad Bolivar, Puerto Ordaz, Maturin and Puerto la Cruz in Venezuela and from Boa Vista in Brazil [read more].

El Dorado is a small town in eastern Venezuela. It is situated in Bolívar State, on the Cuyuni River. It is the second-largest town in Sifontes Municipality; the capital of the municipality is Tumeremo. It is on the road to Brazil. El Dorado has a small airport IATA: EOR, ICAO: SVED. El Dorado was founded in the 1890s. Gold mining was developing in the area, and there was a background of international tension caused by the Essequibo border dispute between Venezuela and Britain [read more].

Ciudad Guayana is a city in the state of Bolívar in Venezuela. It is constituted by Puerto Ordaz and San Félix, two originally independent tows that have sprawled and merged into one single city. The city’s economy is based on heavy industry, including huge aluminum and steel export plants. Ciudad Guayana was founded in 1961 by merging two towns on both of the riversides of the Orinoco, San Félix and Puerto Ordaz as a single city. The (BR-174) which connects the Orinoco towns of Ciudad Bolivar and Ciudad Guayana (or Puerto Ordaz) to Brazil. Buses run this route regularly. Puerto Ordaz is Venezuela’s fastest growing town and is known for some spectacular waterfall parks within the city itself. The visitor infrastructure is still young but the university has long provided a good audience for interesting restaurants and nightspots. San Felix is the colonial town but has no historic building of note and contains the poorer sections of the sprawling urban area [read more].