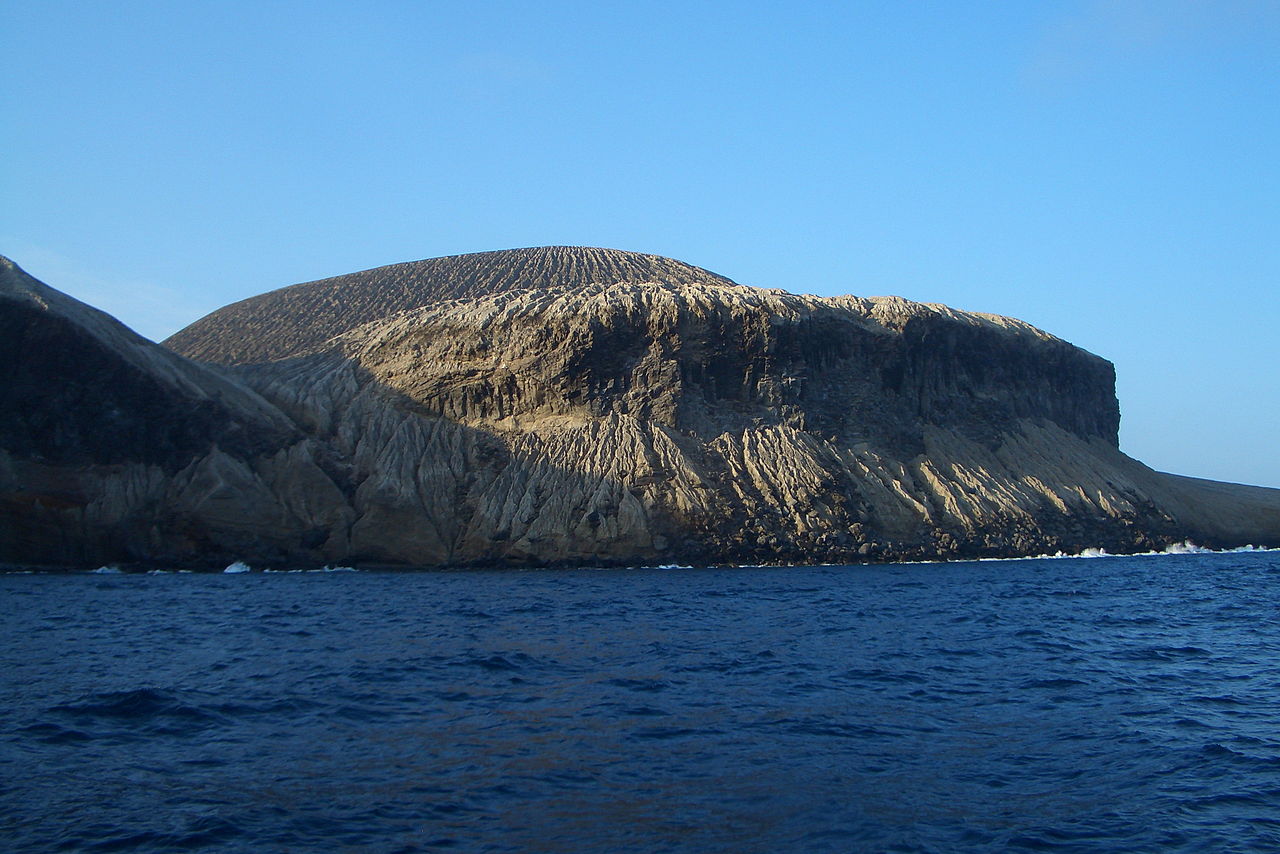 Located in the eastern Pacific Ocean, this archipelago is made up of four remote islands and their surrounding waters: San Benedicto, Socorro, Roca Partida and Clarión. This archipelago is part of a submerged mountain range, with the four islands representing the peaks of volcanoes emerging above sea level. The islands provide critical habitat for a range of wildlife and are of particular importance for seabirds. The surrounding waters have a remarkable abundance of large pelagic species, such as manta rays, whales, dolphins and sharks.

The Archipiélago de Revillagigedo is located in the eastern Pacific Ocean, 386 km southwest of the southern tip of the Baja California Peninsula, and 720 to 970 km west of the Mexican mainland. The Archipiélago de Revillagigedo is a serial nomination made up of four remote islands and their surrounding waters: Isla San Benedicto, Isla Socorro, Isla Roca Partida and Isla Clarión. The property covers 636,685 ha and includes a marine protected area extending 12 nautical miles around each of the islands. A very large buffer zone of 14,186,420 ha surrounds all four islands. Ocean depths within the buffer zone of the property reach 3.7 km, particularly to the west of Isla Roca Partida, and to the west and south of Isla Clarión. Due to their volcanic origin, depths around the islands increase abruptly at distances of between 10-12 km from the island shorelines. The Archipiélago de Revillagigedo is part of a submarine mountain range with the four islands representing the peaks of volcanoes emerging above sea level. Apart from two small naval bases, the islands are uninhabited.

The Archipiélago de Revillagigedo represents an exceptional convergence of two marine biogeographic regions: the Northeastern Pacific and Eastern Pacific. More particularly, the property lies along the junction where the California and Equatorial current mix generating a complex and highly productive transition zone. The islands and surrounding waters of the Archipiélago de Revillagigedo are rich in marine life and recognised as important stepping-stones and stop overs for wide ranging species. The property harbours abundant populations of sharks, rays, large pelagic fish, Humpback Whales, turtles and manta rays; a concentration of wildlife that attracts recreational divers from around the world.

Each of the islands displays characteristic terrestrial flora and fauna and their relative isolation has resulted in high levels of species endemism and micro-endemism, particularly among fish and bird species, many of which are globally threatened. The islands provide critical habitat for a range of terrestrial and marine creatures and are of particular importance to seabirds with Masked, Blue-footed, Red-footed and Brown Boobies, Red-billed Tropicbirds, Magnificent Frigatebirds and many other species dependent on the island and sea habitats. The Archipiélago de Revillagigedo is the only place in the world where the critically endangered Townsend’s Shearwater breeds.

Criterion (vii): Both the landscape and seascape of the Archipiélago de Revillagigedo exhibit impressive active volcanos, arches, cliffs, and isolated rock outcrops emerging from the middle of the ocean. The clear surrounding waters create exceptional scenic vistas with large aggregations of fish gathering around the steep walls and seamounts, as well as large pelagic marine species including Giant Manta Rays, whales, dolphins and sharks. One of the most remarkable aspects of the property is the concentration the Giant Manta Rays which aggregate around the islands and interact with divers in a special way that is rarely found anywhere in the world. Furthermore, the property encompasses an underwater seascape with abyssal plains at depths close to 4,000 meters and sheer drops in crystal clear water, all contributing to an awe-inspiring underwater experience. A large population of up to 2,000 Humpback Whales visits the islands. The songs of these majestic cetaceans can be heard during the winter months and while diving, add another sensory dimension to the marine seascape.

Criterion (ix): The Archipiélago de Revillagigedo is located in the northern part of the Tropical East Pacific Province, a transitional zone influenced mainly by the California current but mixed with the warm waters from the North Equatorial Current. This location results in the convergence of a multitude of fauna and flora, and creates a unique set of biological and ecological processes. The isolation and relatively pristine state of these islands has supported evolutionary processes which result in a high degree of endemicity in both the terrestrial as well as marine realms. In the marine realm the waters surrounding these islands are composed of majestic aggregations of sharks, rays, cetaceans, turtles and fish, a number of which are endemic or near-endemic. On land, important evolutionary processes have led to the speciation of 2 endemic lizards, 2 endemic snakes, 4 endemic birds, at least 33 endemic plant species, and innumerable invertebrates. In addition, 11 endemic subspecies of birds have evolved on the islands, indicating the potential for future evolution on these remote and well protected islands.

Criterion (x): The geographic isolation of the Archipiélago de Revillagigedo, shaped by the prevailing oceanographic conditions, results in high marine productivity, rich biodiversity and exceptional levels of endemism, both terrestrial and marine. The islands are the only breeding site for the Townsend’s Shearwater, one of the rarest seabirds in the world. The Archipiélago de Revillagigedo is also home to the endemic Socorro Dove, Socorro Mockingbird, Socorro Wren, Clarion Wren (as well as 11 endemic bird subspecies), 2 lizards, 2 snakes and numerous endemic plants and invertebrates, all of which contribute to the importance of these islands in conserving terrestrial biodiversity. In the marine realm at least 10 reef fish species have been identified as endemic or near-endemic including the spectacular Clarión Angelfish, which can be observed in ‘cleaning stations’ feeding on the ectoparasites of the Giant Manta Rays. These rays, some of them unusually completely black, aggregate in some of the largest numbers known worldwide. The property is a haven for a rich diversity of shark species with up to 20 having been recorded. Up to 2,000 Humpback Whales also migrate through these nutrient rich and productive waters. The islands are also of significant importance to seabirds notably Masked, Blue-footed, Red-footed and Brown Boobies, Red-billed Tropicbirds, Magnificent Frigatebirds and many other species which can be seen soaring around the rocky outcrops where they nest and fish in the sea.

Socorro Island is a small volcanic island in the Revillagigedo Islands, a Mexican possession lying 600 kilometres (370 mi) off the country’s western coast. The size is 16.5 by 11.5 km (10.25 by 7.15 miles), with an area of 132 km2 (51 sq mi). It is the largest of the four islands of the Revillagigedo Archipelago. The island rises abruptly from the sea to 1,050 meters (3,440 feet) in elevation at its summit. Socorro Island is the emerged summit of a massive, predominately submarine shield volcano. The island is part of the northern Mathematicians Ridge, a mid-ocean ridge that became largely inactive 3.5 million years ago when activity moved to the East Pacific Rise. All four islands along with the many seamounts on the ridge are post-abandonment alkaline volcanoes. Socorro Island is unusual in that it is the only dominantly silicic peralkaline volcanic island in the Pacific Ocean. It most recently erupted in late January-early February, 1993, which was a submarine flank eruption off the coast from Punta Tosca [read more].

Isla Clarión, formerly called Santa Rosa, is the second largest, westernmost and most remote of the Revillagigedo Islands (part of Mexico, specifically the state of Colima), located 314 kilometres (195 mi) west of Socorro Island and over 700 kilometres (430 mi) from the Mexican mainland. It has an area of 19.80 square kilometres (7.64 sq mi) and three prominent peaks. The westernmost and tallest peak, Monte Gallegos, is 335 metres (1,099 ft) high. The central peak is called Monte de la Marina, 280 metres (920 ft), and the eastern peak Pico de la Tienda 292 metres (958 ft). The coasts are backed by perpendicular cliffs, 24 to 183 metres (79 to 600 ft) high, with the exception of the middle part of the southern coast in the vicinity of Bahía Azufre (Sulphur Bay), which is the location of a small military garrison manned by 9 men. Two small and at least temporarily brackish pools are the only source of fresh water; even these may dry up in summers with little rain [read more].