The Zollverein industrial complex in Land Nordrhein-Westfalen consists of the complete infrastructure of a historical coal-mining site, with some 20th-century buildings of outstanding architectural merit. It constitutes remarkable material evidence of the evolution and decline of an essential industry over the past 150 years. 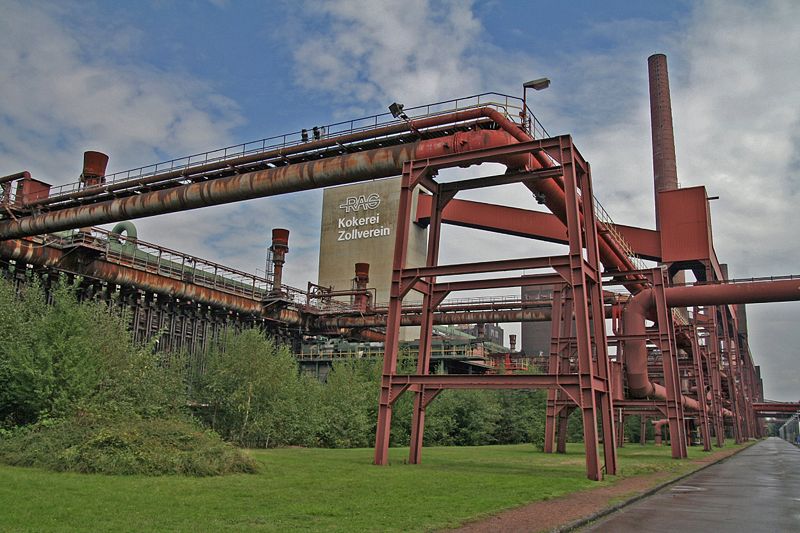 The Zollverein XII Coal Mine Industrial Complex is an important example of a European primary industry of great economic significance in the 19th and 20th centuries. It consists of the complete installations of a historical coal-mining site: the pits, coking plants, railway lines, pit heaps, miner’s housing and consumer and welfare facilities. The mine is especially noteworthy of the high architectural quality of its buildings of the Modern Movement.

Zollverein XII was created at the end of a phase of political and economic upheaval and change in Germany, which was represented aesthetically in the transition from Expressionism to Cubism and Functionalism. At the same time, Zollverein XII embodies this short economic boom between the two World Wars, which has gone down in history as the “Roaring Twenties.” Zollverein is also, and by no means least, a monument of industrial history reflecting an era, in which, for the first time, globalisation and the worldwide interdependence of economic factors played a vital part.

The architects Fritz Schupp and Martin Kemmer developed Zollverein XII in the graphic language of the Bauhaus as a group of buildings which combined form and function in a masterly way.

Criterion (ii): The Zollverein XII Coal Mine Industrial Complex is an exceptional industrial monument by virtue of the fact that its buildings are outstanding examples of the application of the design concepts of the Modern Movement in architecture in a wholly industrial context.

Criterion (iii): The technological and other structures of Zollverein XII are representative of a crucial period in the development of traditional heavy industries in Europe, which were reinforced through the parallel development and application of Modern Movement architectural designs of outstanding quality.

Düsseldorf is a city on the River Rhine in western Germany and is the capital city of the state of North Rhine-Westphalia. It is one of the economic centres of the country, and a major city within the Rhine-Ruhr metropolitan area, with a population of 620,000 (2018). While Frankfurt is the German hub for financial services and many other German cities excel in various branches of industry, Düsseldorf has the highest concentration of professional services, creative industries and media, and is regarded as the German capital of fashion. Düsseldorf also hosts a large number of German or European head offices of Japanese companies, and has a considerable Japanese population, forming over 1% of the city’s population. The city is famous for its nightlife, carnival, events, shopping and for fashion and trade fairs like the Boot Messe (trade fair for boats and watersports) and Igedo (fashion fair). Every year, more than 4 million people visit the Kirmes fun fair which runs for 10 days in the summer [read more].

Cologne is a city on the Rhine river in North Rhine-Westphalia. It is the fourth largest city in Germany with around one million residents. It is one of the nation’s media, tourism and business hotspots, and is considered one of the most liberal cities in Germany. Cologne has a rich history, reaching back to the time of the ancient Roman Empire, when it was founded. It has remained a constantly inhabited important regional centre since. Compared to other German and European cities, the ancient and medieval Cologne was relatively large, covering most of the modern-day city centre. A wealth of architectural heritage can therefore be found across the city ranging from pre-Christian times to strikingly modern buildings, with a high concentration of Romanesque and Gothic architecture, culminating in the magnificent cathedral (Dom). Cologne is, however, not only a tourist destination, but on an equal note a major economic centre, a globally important trade fair location, a culture and media hotspot and a major transportation hub [read more].

Frankfurt is the largest city in the German state of Hesse, and is considered the business and financial centre of Germany. It is the fifth largest city in Germany after Berlin, Hamburg, Munich and Cologne. The city is known for its modern skyline, and for hosting the headquarters of the European Central Bank, the Deutsche Börse stock exchange and numerous German financial services companies. Furthermore, it hosts some of the world’s most important trade shows, such as the Frankfurt Auto Show and the Frankfurt Book Fair. Located on the river Main at a crossroad of the German Autobahn system and connected to several high-speed rail lines, with Germany’s busiest airport on its outskirts, Frankfurt is one of the most important transportation hubs of Europe. Frankfurt is a city of contrasts. Wealthy bankers, students and hippie drop-outs coexist in a city that has some of the highest, most avant-garde skyscrapers of Europe next to well maintained old buildings [read more].