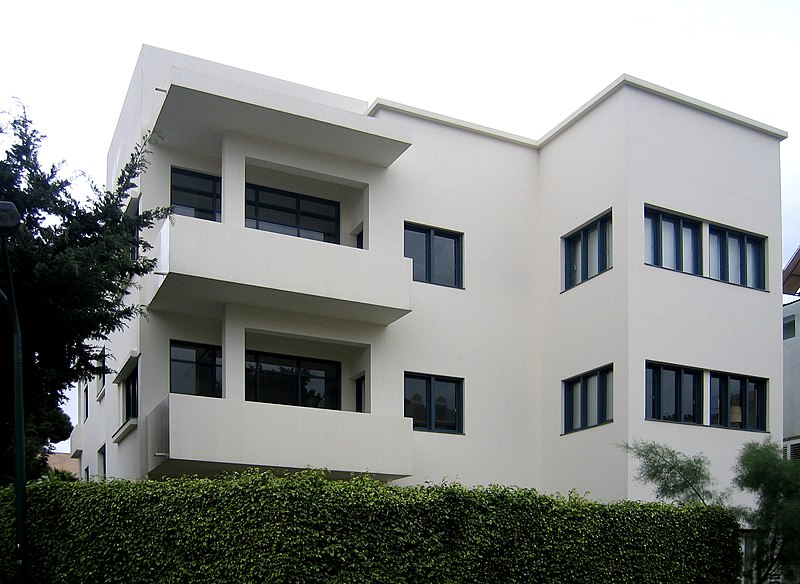 Museum of Bauhaus at Bialik Street (Talmoryair/Wikipedia, CC BY 3.0).

Tel Aviv was founded in 1909 and developed as a metropolitan city under the British Mandate in Palestine. The White City was constructed from the early 1930s until the 1950s, based on the urban plan by Sir Patrick Geddes, reflecting modern organic planning principles. The buildings were designed by architects who were trained in Europe where they practised their profession before immigrating. They created an outstanding architectural ensemble of the Modern Movement in a new cultural context.

The city of Tel Aviv was founded in 1909 to the immediate north of the walled port city of Jaffa, on the hills along the eastern coast of the Mediterranean Sea. During the era of British rule in Palestine (1917-1948) it developed into a thriving urban centre, becoming Israel’s foremost economic and metropolitan nucleus.

The White City of Tel Aviv can be seen as an outstanding example in a large scale of the innovative town-planning ideas of the first part of the 20th century. The architecture is a synthetic representation of some of the most significant trends of Modern Movement in architecture, as it developed in Europe. The White City is also an outstanding example of the implementation of these trends taking into account local cultural traditions and climatic conditions.

Tel Aviv was founded in 1909 and developed rapidly under the British Mandate in Palestine. The area of the White City forms its central part, and is based on the urban master plan by Sir Patrick Geddes (1925-27), one of the foremost theorists in the early modern period. Tel Aviv is his only large-scale urban realization, not a ‘garden city’, but an urban entity of physical, economic, social and human needs based on an environmental approach. He developed such innovative notions as ‘conurbation’ and ‘environment’, and was pioneer in his insight into the nature of city as an organism constantly changing in time and space, as a homogeneous urban and rural evolving landscape. His scientific principles in town planning, based on a new vision of a ‘site’ and ‘region’, influenced urban planning in the 20th century internationally. These are issues that are reflected in his master plan of Tel Aviv.

The buildings were designed by a large number of architects, who had been trained and had practised in various European countries. In their work in Tel Aviv, they represented the plurality of the creative trends of modernism, but they also took into account the local, cultural quality of the site. None of the European or North-Africa realizations exhibit such a synthesis of the modernistic picture nor are they at the same scale. The buildings of Tel Aviv are further enriched by local traditions; the design was adapted to the specific climatic conditions of the site, giving a particular character to the buildings and to the ensemble as a whole.

Criterion (ii): The White City of Tel Aviv is a synthesis of outstanding significance of the various trends of the Modern Movement in architecture and town planning in the early part of the 20th century. Such influences were adapted to the cultural and climatic conditions of the place, as well as being integrated with local traditions.

Criterion (iv): The White City of Tel Aviv is an outstanding example of new town planning and architecture in the early 20th century, adapted to the requirements of a particular cultural and geographic context.

Tel Aviv is the second largest city in Israel (after Jerusalem), and the largest metropolitan area. It is on the Mediterranean coast, about 60 km northwest of Jerusalem and 100 km south of Haifa. The official name is Tel Aviv-Yafo, and reflects the fact that the city has grown beside (and absorbed) the ancient port city of Yafo (English: Jaffa), to the south of the new city center. Tel Aviv is home to most embassies in Israel. Tel Aviv is a rapidly growing city in the midst of an exciting transition from medium-sized urban center to bustling international metropolis. Its booming population, energy, edginess and 24-hour lifestyle give the city a cosmopolitan flair comparable to few other cities in this part of the world. Tel Aviv is not really divided into districts, but rather into over 50 different neighborhoods. Some neighborhoods are really distinctive areas with different cultures (e.g. Neve Tzedek, Florentin, Ramat-HaHayal), while others indicate a geographical area [read more].

Jerusalem is the capital and largest city of Israel, though most other countries and the United Nations do not recognize it as Israel’s capital. The ancient city in the Judean Hills has a fascinating history spanning thousands of years. The city is holy to the three monotheistic religions – Judaism, Christianity and Islam, and serves as a spiritual, religious, and cultural center. Due to the religious significance of the city, and in particular the many sites of the Old City area, Jerusalem is one of the main tourist destinations in Israel. Jerusalem has many historic, archeological and cultural sites, along with vibrant and crowded shopping centers, cafés, and restaurants. Jerusalem of Gold, as it has come to be known in Hebrew, is a fascinatingly unique place where the first century rubs shoulders with the twenty-first century, each jostling for legitimacy and space, and where picturesque “old” neighborhoods nestle against glistening office towers and high-rise apartments [read more].

Haifa is the third largest city in Israel and the largest city in the north of the country with a population close to 300,000. The city is located on Israel’s Mediterranean shoreline, on Mount Carmel and at its foot. Haifa is an important transportation, industrial and cultural center and one of Israel’s most important maritime trade centers. Haifa is the second holiest city in the Baha’i Faith. The Bahá’í sites in Haifa were declared a World Heritage Site by UNESCO in 2008 and serve as one of the city’s leading tourist sites. Haifa is first mentioned historically around the… [read more].