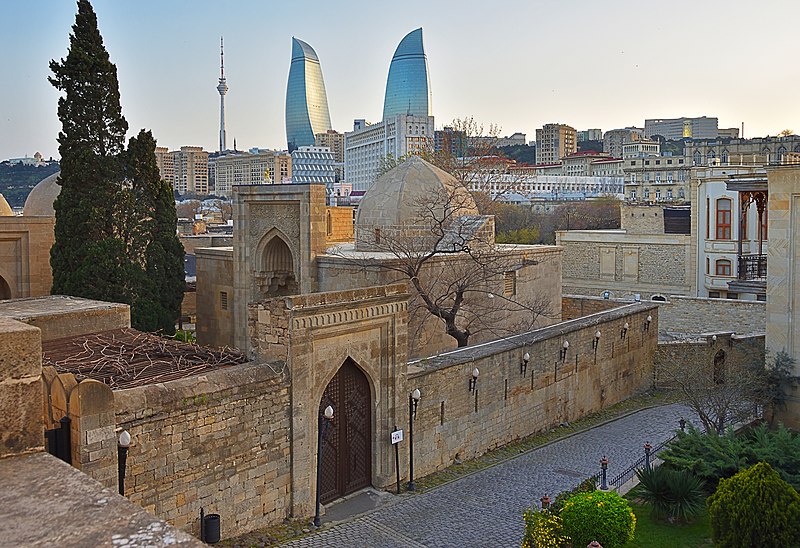 Built on a site inhabited since the Palaeolithic period, the Walled City of Baku reveals evidence of Zoroastrian, Sasanian, Arabic, Persian, Shirvani, Ottoman, and Russian presence in cultural continuity. The Inner City (Icheri Sheher) has preserved much of its 12th-century defensive walls. The 12th-century Maiden Tower (Giz Galasy) is built over earlier structures dating from the 7th to 6th centuries BC, and the 15th-century Shirvanshahs’ Palace is one of the pearls of Azerbaijan’s architecture.

Rising from the south shore of the Apsheron Peninsular at the western edge of the Caspian Sea, the Walled City of Baku was founded on a site inhabited since the Palaeolithic period. The city reveals, along with the dominant Azerbaijani element, evidence of Zoroastrian, Sassanian, Arabic, Persian, Shirvani, Ottoman, and Russian presence in cultural continuity. The inner city (Icherisheher) has preserved much of its 12th-century defensive walls, which define the character of the property. The most ancient monument of Icherisheher is the Maiden Tower – symbol of the city of Baku. Some evidence suggests that the construction of the Tower might have been as early as the 7th-6th centuries BC. Another monument of universal value, one of the pearls of Azerbaijan’s architecture is the 12th- to 15th-century Shirvanshahs’ Palace, located at the highest point of Icherisheher. Within the Palace complex are the Divankhana (reception hall) or, as some researchers believe, the Tomb of Shah, the residential building of Shirvanshahs, the remains of Key-Kubad Mosque, the Tomb of Seyid Yahya Bakuvi, Murad’s Gate (the only monument of the 16th century), the Tomb of Shirvanshahs’ Family, the Shah Mosque and the Palace bath-house. Earlier monuments of Icherisheher include the Mohammed Mosque, together with the adjacent minaret built in 1078, and remains of the 9th- to 10th-century mosque near the Maiden Tower.

There are also numerous historical-architectural monuments of the medieval period such as caravanserais, hamams (bath-houses), mosques and residential buildings of the 18th to 20th centuries located within the property.

The magnificence of Icherisheher lies in the combination of its distinct architectural monuments and its historically composed architectural spatial planning with original street views, which have merged into a single entity to reflect its long history and the melding of cultures that have influenced its development over the past nine centuries. Icherisheher is still a living, vibrant city with residential areas housing local communities.

Criterion (iv): The Walled City of Baku represents an outstanding and rare example of an historic urban ensemble and architecture with influence from Zoroastrian, Sassanian, Arabic, Persian, Shirvani, Ottoman, and Russian cultures.

Baku is the largest city in the Caucasus and the capital of Azerbaijan. Baku is on the coast of the Caspian Sea on the southern tip of the Absheron Peninsula. There are three major divisions in Baku: İçəri Şəhər (the Old Town), the Soviet-built city, and the newest part of the city. The population as of January 2012 was 2,122,300. The city of Baku is on the semi-arid and dusty Absheron peninsula. The center of Baku is a patch of green in a largely brown area because of the many liters of water that is piped to the city every day. The city has a metro, a well developed bus and mini bus network, and a large area for walking including the Inner Walled City, The Boluvar, and Fountain Square. Reading the book Ali and Nino is a good way to get into the mood. A curious fact about Baku is that its average year-round temperature (14.2°C/57.6°F) matches the average temperature of the entire landmass of the earth to within a tenth of degree [read more].

Sumqayit, or Sumgayit is the third-largest city in Azerbaijan. Sumqayit was one of the biggest industrial cities of its time during the Soviet Union era. There were nearly 90 heavy-to-medium industrial plants but nowadays only 5 or 6 of them remain. The city was planned and built in 1950s so that the industrial zone was 3-4 km away from residential areas in an unsuccessful attempt to minimize the pollution effects on people. This is why the coast line of the city consists of so much green area. See the municipality building in the town center, there is a UEFA accredited football stadium which you can also use and exercise there. The shore of the city which there also stands a bird-like statue is the only place you can get some entertainment. This area is called goyerchin, or the dove. The Peace Dove is an allegorical sculpture in Nasimi Culture and Leisure Park in Sumgayit, Azerbaijan [read more].

Lankaran, Lenkeran, or Lenkoran is in Azerbaijan’s Talysh Region. The population of the city of Lankaran is 48,400. The population of the district was 196,156 by January 2004. Among them, 58,937 people live in the cities, 20,284 in the settlements and 116,935 in the villages. The density of population 127.5 person per 1 km2 is 40% more than republic level. The ratio of woman to men per 100 citizens is 49/51. The number of population increases by the natural growth. During the last years, the number of population has increased by 9.8 thousand person or 5.3%. The region is well endowed by labor resources. The number of working people is 82,339. It is 73.3% of the economical active parts of population. 3.2% of working people are busy in branches of industries and constructions, 73.8% in agriculture, and 23% in different fields of production and services. Except the local people, 519 refugees, and displaced people [read more].