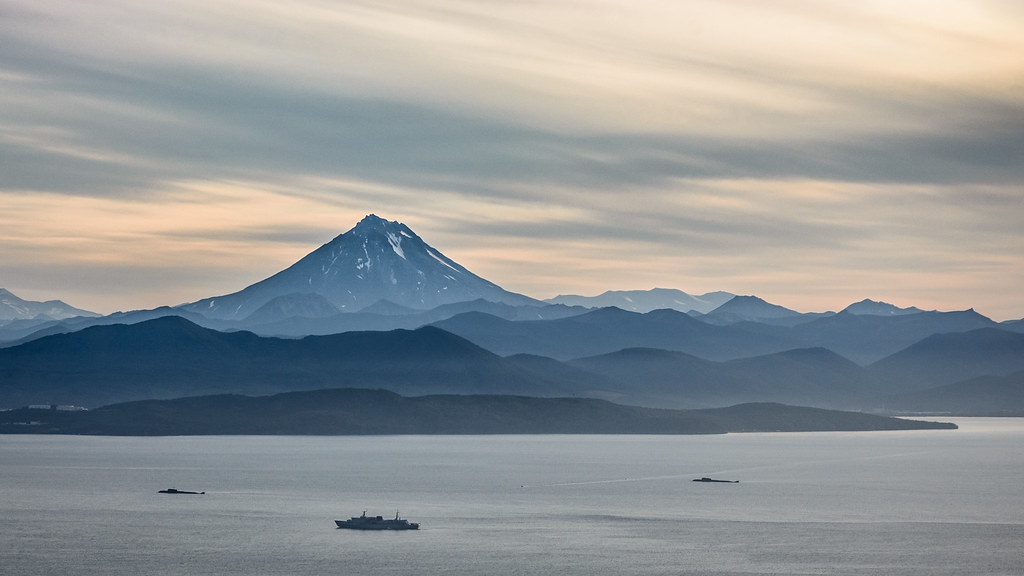 This is one of the most outstanding volcanic regions in the world, with a high density of active volcanoes, a variety of types, and a wide range of related features. The six sites included in the serial designation group together the majority of volcanic features of the Kamchatka peninsula. The interplay of active volcanoes and glaciers forms a dynamic landscape of great beauty. The sites contain great species diversity, including the world’s largest known variety of salmonoid fish and exceptional concentrations of sea otter, brown bear and Stellar’s sea eagle. 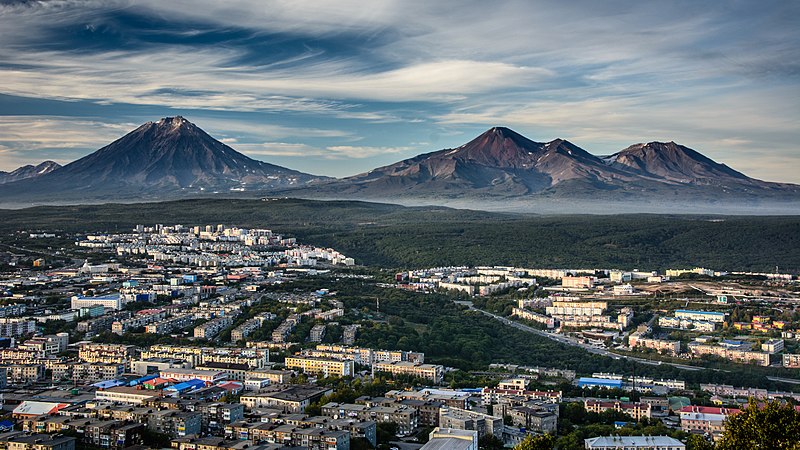 The Committee inscribed the Volcanoes of Kamchatka as one of the most outstanding examples of the volcanic regions in the world on the basis of natural criteria (vii), (viii) and (ix). The site contains a high density of active volcanoes, a variety of different types and a wide range of volcanic features. The Peninsula location between a large continental landmass and the Pacific Ocean also exhibits unique characteristics with major concentrations of wildlife.

Criterion (viii): The addition of Kluchevskoy Nature Park as the sixth component of the site further adds to the overall coverage of the range of Kamchatka’s natural features. The addition to the site clearly meets criterion (viii) in its own right as an outstanding example of geological processes and landforms and therefore contributes in a very significant way to the expanded site as a whole meeting criterion (viii).

Criterion (ix) : The expanded site is also biologically analogous to six islands and its geographic location between a large continental landmass and the Pacific Ocean has given it unique characteristics. Natural processes continue with on-going volcanic activity and colonisation. Kluchevskoy Nature Park contributes significantly to the expanded site as a whole meeting criterion (ix).

Criterion (vii): The Kamchatka Volcanoes is a landscape of exceptional natural beauty with its large symmetrical volcanoes, lakes, wild rivers and spectacular coastline. It also contains superlative natural phenomena in the form of salmon spawning areas and major concentrations of wildlife (e.g. seabird colonies) along the coastal zone of the Bering Sea. Kluchevskoy Nature Park contributes very significantly to the site as a whole meeting criterion (vii).

Criterion (x): The Kamchatka Volcanoes contain an especially diverse range of palearctic flora (including a number of nationally threatened species and at least 16 endemics), and bird species such as the Stellar’s Sea Eagle (50% of world population), white tailed eagle, gyr falcon and peregrine falcon, which are attracted to the availability of spawning salmon. The rivers inside and adjacent to the site contain the world’s greatest known diversity of salmonid fish. All 11 species coexist in several of Kamchatka’s rivers.

Petropavlovsk-Kamchatsky is the capital and largest city on Russia’s Kamchatka Peninsula. It is a port city on the Avacha Bay and surrounded by high, snow-capped mountains and volcanoes. This city of roughly 200,000 residents is the principal entry point for travelers visiting the peninsula, and has good tourist infrastructure, offering anything from wildlife viewing to bear hunting to paragliding. Petropavlovsk-Kamchatsky shares the same parallels as Manchester and Dublin, but is harsher climate-wise. In summer the daily temperatures happen to reach 25-30°C. Rains are frequent at daytime with mists that occur in evenings. Winters are mitigated by the sea and are much milder and snowier than the rest of Siberia. The end of January and beginning of February are frosty, often about -20 °C. The closest analogues in climate are Alaska’s Anchorage and Juneau. Most things of interest within the city are located within a compact area that can be covered on foot [read more].

Yelizovo is a small city of 40,000 on the Avacha RIver near Petropavlovsk-Kamchatsky, Kamchatka, Russia most notable for hosting the only commercial airport on Kamchatka. Yelizovo was founded as a village in 1848, named Stary Ostrog, renamed Zavoyko in 1897 after the Russian General who led the famous defense of Petropavlovsk against an Anglo-French siege, and renamed Yelizovo in 1923. Today, the city exists mainly to service the airport, but also is a center for the fishing industry (albeit a far smaller one than the capital). The city spans the Acha River, and it’s useful to think of it as two cities—the airport/military zone, and the actual city of Yelizovo across the river. The city center (across the river) is around the market and along ulitsa Zavoika south of the intersection with ulitsa Lenina. Yelizovo is often used as a base for tourists exploring the surrounding areas, but the service sector outside of the airport is not used to non-Russian tourists, and it is not easy to find English speakers [read more].

Vilyuchinsk is a closed town in Kamchatka Krai, Russia, located on the Kamchatka Peninsula about 20 kilometers (12 mi) across Avacha Bay from Petropavlovsk-Kamchatsky. Population: 22,905 (2010 Census); 24,166 (2002 Census). It was founded as Sovetsky on October 16, 1968 through the amalgamation of three earlier settlements which supplied the Soviet Navy and served as a base for submarine construction: Rybachy, Primorsky, and Seldevaya. In 1970, as with other closed towns in the Soviet Union, it was given a code name based on the nearest major city, becoming known officially as Petropavlovsk-Kamchatsky-50 until 1994. In 1994, the town was renamed after the nearby volcano, Vilyuchik. Besides the construction of nuclear submarines, the town’s economy is largely reliant on fishing and processing of fish. In the suburb of Rybachy, one of the three original settlements from which the town was created, a squadron of submarines of the Russian Pacific Fleet has been based since August 1938 [read more].