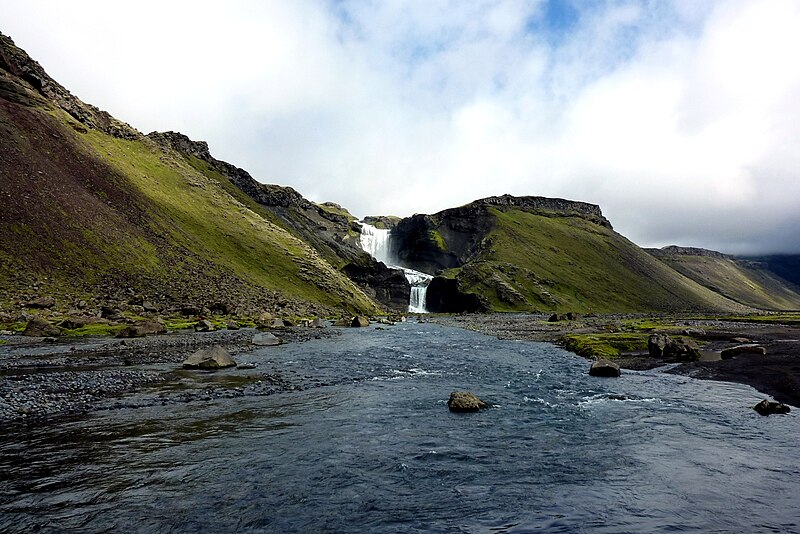 This iconic volcanic region covers an area of over 1,400,000 ha, nearly 14% of Iceland’s territory. It numbers ten central volcanoes, eight of which are subglacial. Two of these are among the most active in Iceland. The interaction between volcanoes and the rifts that underlie the Vatnajökull ice cap takes many forms, the most spectacular of which is the jökulhlaup – a sudden flood caused by the breach of the margin of a glacier during an eruption. This recurrent phenomenon has led to the emergence of unique sandur plains, river systems and rapidly evolving canyons. Volcanic areas are home to endemic groundwater fauna that has survived the Ice Age.

The property, totalling over 1,400,000 ha, comprises the whole of Vatnajökull National Park, plus two contiguous protected areas. At its heart lies the c.780,000 ha Vatnajökull ice cap in southeast Iceland.

Iceland includes the only part of the actively spreading Mid-Atlantic Ridge exposed above sea level, with the tectonic plates on either side moving apart by some 19 mm each year. This movement is accommodated in rift zones, two of which, the Eastern and Northern Volcanic Zones, pass through the property. Underneath their intersection is a mantle plume providing a generous source of magma. The property contains ten central volcanoes, eight of which are subglacial. Two of the latter are among the four most active in Iceland. Most of the property’s bedrock is basaltic, the oldest being erupted some 10 million years ago and the most recent in 2015. Outside of the ice cap, the terrain varies from extensive, flat lava flows to mountains, including tuyas and tindar (ridges) of brown hyaloclastites, erupted in fissure eruptions beneath ice age glaciers. The latter occur nowhere else in the world in such numbers.

The property comprises an entire system where magma and the lithosphere are incessantly interacting with the cryosphere, hydrosphere and atmosphere to create extremely dynamic and diverse geological processes and landforms that are currently underrepresented or not found on the World Heritage List. It was here that the phrase “Fire and Ice” was coined. The Vatnajökull ice cap reached its greatest extent by the end of the 18th century and has on average been retreating since then. Recently, its retreat has accelerated in response to global warming, making the property a prime locality for exploring the impacts of climate change on glaciers and the landforms left behind when they retreat. The volcanic zones of the property hold endemic groundwater fauna that has survived the ice age and single-celled organisms prosper in the inhospitable environment of subglacial lakes that may replicate conditions on early Earth and the icy satellites of Jupiter and Saturn.

Criterion (viii): The coexistence and ongoing interaction of an active oceanic rift on land, a mantle plume, the atmosphere and an ice cap, which has varied in size and extent over the past 2.8 million years, make the property unique in a global context. Earth system interactions are constantly building and reshaping the property, creating remarkably diverse landscapes and a wide variety of tectonic, volcanic and glaciovolcanic features. Especially interesting and unique in this regard are the basaltic lava shields (Iceland shields), volcanic fissures and cone rows, vast flood lavas, and features of ice dominant glacio-volcanism, such as tuyas and tindar. Interestingly, the well exposed volcanic features of the property have been used as analogues for similar features on the planet Mars. Geothermal heat and subglacial eruptions produce meltwater and jökulhlaups that maintain globally unique sandur plains, to the north and south of the Vatnajökull ice cap, as well as rapidly evolving canyons. In addition, the property contains a dynamic array of glacial- and geomorphological features, created by expanding or retreating glaciers responding to changes in climate. These features can be easily accessed and explored at the snouts of Vatnajökull’s many outlet glaciers and their forelands, especially in the southern lowlands, making the property a flagship glacial research location.

Höfn (pronounced something like “herpn”, also known as Höfn í Hornafirði, is a town in East Iceland, at the south-eastern corner of the country. Höfn sits by the lagoon (or fjord) Hornafjörður which is also the name of the large municipality of which the town is the centre and which covers the entire area of the county Austur-Skaftafellssýsla. This guide covers the town and the surrounding municipality, excluding the westernmost part which forms one of the main gateways to Vatnajökull National Park. For tourism purposes, the area calls itself the Vatnajökull Region: nowhere else is quite as dominated by Europe’s largest glacier, nowhere else have people learned to live in such close quarters with the huge sheet of ice. In spite of substantial territory, the population of the Hornafjörður area is only around 2400. Höfn is by far the largest settlement with around 2000 inhabitants. The rest of the population is spread along the very narrow patch of arable land between Vatnajökull and the Atlantic Ocean [read more].

Akureyri, with a population of around 19,000 (2019), is the largest town in Iceland outside the Southwest region, and the unofficial capital of North Iceland. Akureyri is a very picturesque town with its location by a scenic fjord, eclectic building styles and streets winding their way through gorges. Spend some time walking around the city centre, see the impressive church and check out Listagilið (literally: “the art canyon”), home to a number of arts and crafts galleries and shops. The tranquil municipal botanical garden, Lystigarðurinn, is worth visiting, as are the several small museums dotted around town. Be sure to visit Nonnahús, childhood home of author Jón “Nonni” Sveinsson, as well as Sigurhæðir and Davíðshús, the former homes of poets Matthías Jochumsson and Davíð Stefánsson. Admission is kr 1200 for adults, or get a day’s pass that also includes access to Minjasafnið á Akureyri (Akureyri Museum) and Gamli bærinn Laufás (Old Turfhouse Laufás) for kr 2000 [read more].

Reykjavík is the capital of and largest city in Iceland and with an urban area population of around 233,000 (2019), it is the home to two-thirds of Iceland’s population. It is the centre of culture and life of the Icelandic people, and is one of the focal points of tourism in Iceland. The city is spread out, and has sprawling suburbs. The city centre, however, is a very small area characterised by eclectic and colourful houses, with good shopping, dining and drinking. Reykjavik has the distinction of being the northernmost capital city in the world, though its winters are surprisingly mild for a city of its latitude. When it started to develop as a town in the 18th century, Reykjavík had already been inhabited for almost a thousand years. Legend has it that the first permanent settler in Iceland was a Norwegian named Ingólfur Arnarson. He is said to have thrown his seat pillars into the sea en route to Iceland, and decided to settle wherever the pillars were found [read more].