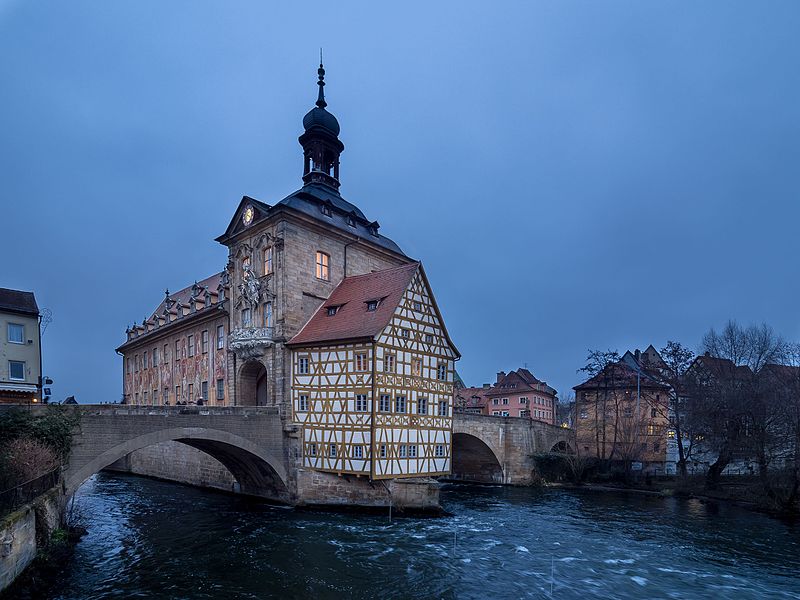 From the 10th century onwards, this town became an important link with the Slav peoples, especially those of Poland and Pomerania. During its period of greatest prosperity, from the 12th century onwards, the architecture of Bamberg strongly influenced northern Germany and Hungary. In the late 18th century it was the centre of the Enlightenment in southern Germany, with eminent philosophers and writers such as Hegel and Hoffmann living there.

Bamberg is located in southern Germany in the north of Bavaria. It is a good example of a central European town with a basically early medieval plan and many surviving ecclesiastical and secular buildings of the medieval period. When Henry II, Duke of Bavaria, became King of Germany in 1007 he made Bamberg the seat of a bishopric, intended to become a ‘second Rome’. Of particular interest is the way in which the present town illustrates the link between agriculture (market gardens and vineyards) and the urban distribution centre.

From the 10th century onwards, Bamberg became an important link with the Slav peoples, especially those of Poland and Pomerania. During its period of greatest prosperity, from the 12th century onwards, the architecture of this town strongly influenced northern Germany and Hungary. In the late 18th century Bamberg was the centre of the Enlightenment in southern Germany, with eminent philosophers and writers such as Georg Wilhelm Friedrich Hegel and E.T.A. Hoffmann living there.

Criterion (ii): The layout and architecture of medieval and baroque Bamberg exerted a strong influence on urban form and evolution in the lands of central Europe from the 11th century onwards.

Criterion (iv): Bamberg is an outstanding and representative example of an early medieval town in central Europe, both in its plan and its surviving ecclesiastical and secular buildings.

Nuremberg (German: Nürnberg) is Franconia’s largest city, and its undisputed economic, social and cultural centre. The city lies on the Pegnitz River and the Main-Danube Canal. Within the city limits Nuremberg has a population of about 520,000 (2018), making it the second-biggest city in the Bundesland Bavaria and the biggest city in the region of Franconia. Greater Nuremberg including its suburbs has a population of 1.3 million. The Metropolitan Region Nuremberg which extends to cities like Bamberg or Ansbach has a population of 3.5 million. Long a de facto independent “freie Reichstadt”, the city was an early centre of manufacturing and proto-industry and had a golden era during the 16th century when people like Albrecht Dürer, Hans Sachs or Martin Behaim called the city home. Annexed into Bavaria in the early 19th century, the city later came to host Germany’s first railway, linking it with neighbouring Fürth (this railway has since been replaced first by a tram and then by a subway line; the current route to Fürth follows a different alignment) [read more].

Würzburg or Wuerzburg (and sometimes misspelled as Wurzburg) is in Franconia, in northern Bavaria, Germany. It is the largest city in the Lower Franconia region, famous throughout Germany for its wine and as the northern end of the Romantic Road. A city rich in history that revolves around the Franconian locality, today Würzburg is a beautiful, historic, and lively city that is often overlooked by foreign visitors. It should also not be overlooked however, that a third of its roughly 130,000 inhabitants (2018) are students of 3 colleges based here. As such, travellers can also find an extensive assortment of cheap non-German food and some partying scenes, amidst the local culture that the city preserves. Founded in the 10th century, Würzburg served as the home of powerful prince-bishops for many centuries. It is renowned for the Residence, regarded as one of the finest palaces in Europe and a high point of Baroque art (UNESCO cultural world heritage) [read more].

Frankfurt (German: Frankfurt am Main) is the largest city in the German state of Hesse, and is considered the business and financial centre of Germany. It is the fifth largest city in Germany after Berlin, Hamburg, Munich and Cologne. The city is known for its modern skyline, and for hosting the headquarters of the European Central Bank, the Deutsche Börse stock exchange and numerous German financial services companies. Furthermore, it hosts some of the world’s most important trade shows, such as the Frankfurt Auto Show and the Frankfurt Book Fair. Located on the river Main at a crossroad of the German Autobahn system and connected to several high-speed rail lines, with Germany’s busiest airport on its outskirts, Frankfurt is one of the most important transportation hubs of Europe. Frankfurt is a city of contrasts. Wealthy bankers, students and hippie drop-outs coexist in a city that has some of the highest, most avant-garde skyscrapers of Europe next to well maintained old buildings [read more].