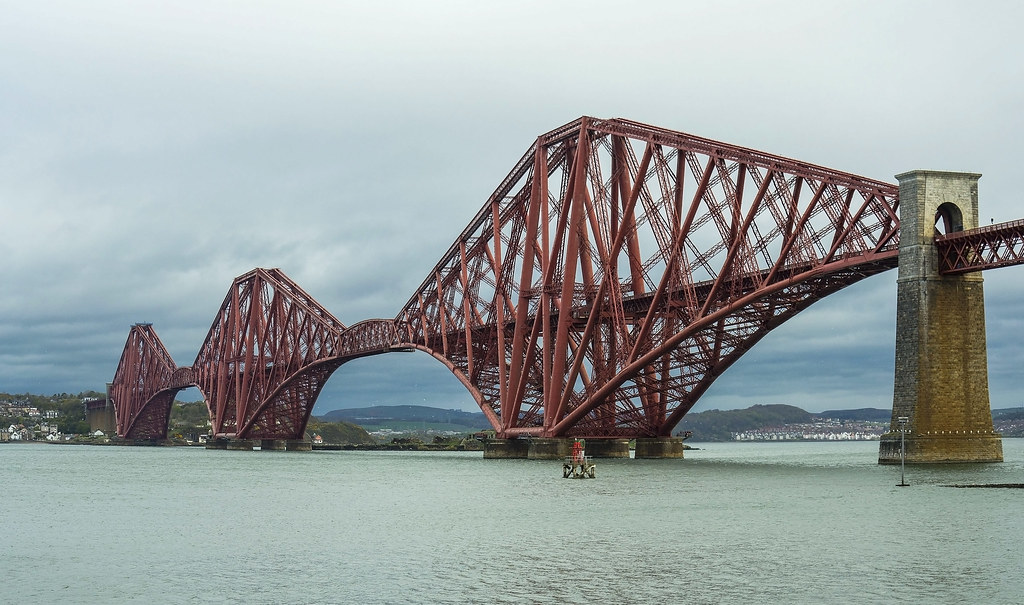 This railway bridge, crossing the Forth estuary in Scotland, had the world’s longest spans (541 m) when it opened in 1890. It remains one of the greatest cantilever trussed bridges and continues to carry passengers and freight. Its distinctive industrial aesthetic is the result of a forthright and unadorned display of its structural components. Innovative in style, materials and scale, the Forth Bridge marks an important milestone in bridge design and construction during the period when railways came to dominate long-distance land travel.

The Forth Bridge (Lexcie/Wikipedia, CC BY-SA 3.0).

The Forth Bridge, which spans the estuary (Firth) of the River Forth in eastern Scotland to link Fife to Edinburgh by railway, was the world’s earliest great multispan cantilever bridge, and at 2,529 m remains one of the longest. It opened in 1890 and continues to operate as an important passenger and freight rail bridge. This enormous structure, with its distinctive industrial aesthetic and striking red colour, was conceived and built using advanced civil engineering design principles and construction methods. Innovative in design, materials, and scale, the Forth Bridge is an extraordinary and impressive milestone in bridge design and construction during the period when railways came to dominate long-distance land travel.

This large-scale engineering work’s appearance is the result of a forthright, unadorned display of its structural elements. It is comprised of about 54,000 tons of mild steel plate rolled and riveted into 4m diameter tubes used in compression, and lighter steel spans used in tension. The use of mild steel, a relatively new material in the 1880s, on such a large-scale project was innovative, and helped to bolster its reputation. The superstructure of the bridge takes the form of three double-cantilever towers rising 110 m above their granite pier foundations, with cantilever arms to each side. The cantilever arms each project 207 m from the towers and are linked together by two suspended spans, each 107 m long. The resulting 521-m spans formed by the three towers were individually the longest in the world for 28 years, and remain collectively the longest in a multi-span cantilever bridge. The Forth Bridge is the culmination of its typology, scarcely repeated but widely admired as an engineering wonder of the world.

Criterion (i): The Forth Bridge is a masterpiece of creative genius because of its distinctive industrial aesthetic, which is the result of a forthright, unadorned display of its massive, functional structural elements.

Criterion (iv): The Forth Bridge is an extraordinary and impressive milestone in the evolution of bridge design and construction during the period when railways came to dominate long-distance land travel, innovative in its concept, its use of mild steel, and its enormous scale.

Edinburgh is the capital of Scotland located in the Central Belt region of the country. With a population of approximately 450,000 (1 million in the city region), Edinburgh fizzes with a cosmopolitan yet uniquely Scottish atmosphere. Old volcanoes ensure a dramatic natural setting, with the imposing castle atop one. Beneath its guard, the city combines medieval relics, Georgian grandeur and a powerful layer of modern life with contemporary avant-garde. Medieval palaces, Gothic churches and fascinating historical buildings rub shoulders with the best of modern architecture, such as the Houses of Scottish Parliament and the refurbished National Museum of Scotland. [read more]

Glasgow (Gaelic: Glaschu, Scots: Glesga) is the largest city in Scotland and the fourth-largest in the UK; with a population of about 600,000 in the city itself and over 2,000,000 if the surrounding towns of the Clydeside conurbation are taken into account. Located at the west end of Scotland’s Central Belt on the banks of the River Clyde, Glasgow’s historical importance as Scotland’s main industrial centre has been challenged by decades of socio-economic and political change alongside various regeneration efforts. Despite this, Glasgow remains one of the nation’s key economic centres outside of London. [read more]

Newcastle upon Tyne is a port city in the North East of England. It has a population of 250,000 but including the surrounding urban area its population is almost 1 million. It has among the best nightlife in all of Britain, and has a distinct Geordie vernacular. Newcastle is a lively and diverse city, known for its nightlife, art, music and sports. Compact, attractive and friendly, it is one of England’s core cities and is a centre of culture, architecture and business. Newcastle is a starting point for tours of the Northumberland coast and Hadrian’s Wall. [read more]