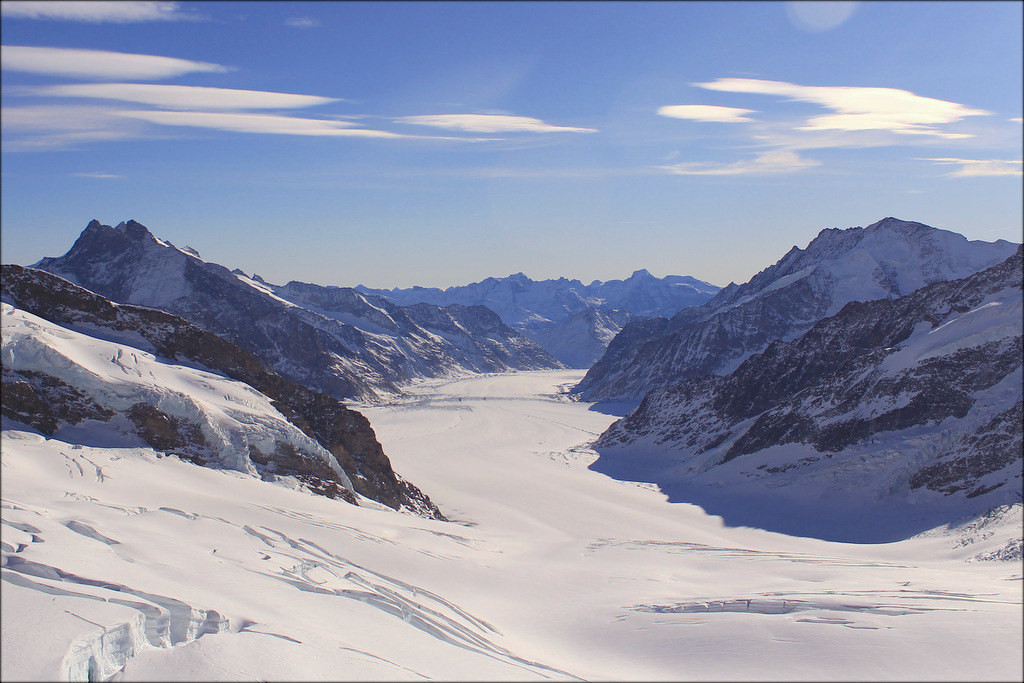 The extension of the natural World Heritage property of Jungfrau – Aletsch – Bietschhorn (first inscribed in 2001), expands the site to the east and west, bringing its surface area up to 82,400 ha., up from 53,900. The site provides an outstanding example of the formation of the High Alps, including the most glaciated part of the mountain range and the largest glacier in Eurasia. It features a wide diversity of ecosystems, including successional stages due particularly to the retreat of glaciers resulting from climate change. The site is of outstanding universal value both for its beauty and for the wealth of information it contains about the formation of mountains and glaciers, as well as ongoing climate change. It is also invaluable in terms of the ecological and biological processes it illustrates, notably through plan succession. Its impressive landscape has played an important role in European art, literature, mountaineering and alpine tourism.

The Jungfrau-Aletsch-Bietschhorn region is the most glaciated part of the European Alps, containing Europe’s largest glacier and a range of classic glacial features, and provides an outstanding record of the geological processes that formed the High Alps. A diverse flora and fauna is represented in a range of habitats, and plant colonization in the wake of retreating glaciers provides an outstanding example of plant succession.

Criterion (vii): The impressive landscape within the property has played an important role in European art, literature, mountaineering and alpine tourism. The area is globally recognised as one of the most spectacular mountain regions to visit and its aesthetics have attracted an international following. The impressive north wall of the High Alps, centred on the Eiger, Mönch and Jungfrau peaks, is a superlative scenic feature, complemented on the southern side of the Alpine divide by spectacular peaks and a valley system which supports the two longest glaciers in western Eurasia.

Criterion (viii): The property provides an outstanding example of the formation of the High Alps resulting from uplift and compression which began 20-40 million years ago. Within an altitude range from 809 m to 4,274 m, the region displays 400 million-year-old crystalline rocks thrust over younger carbonate rocks due to the northward drift of the African tectonic plate. Added to the dramatic record of the processes of mountain building is a great abundance and diversity of geomorphological features such as U-shaped glacial valleys, cirques, horn peaks, valley glaciers and moraines. This most glaciated part of the Alps contains the Aletsch glacier, the largest and longest in Europe, which is of significant scientific interest in the context of glacial history and ongoing processes, particularly related to climate change.

Criterion (ix): Within its altitudinal range and its dry southern/wet northern exposures, the property provides a wide range of alpine and sub-alpine habitats. On the two main substrates of crystalline and carbonate rocks, a variety of ecosystems have evolved without significant human intervention. Superb examples of plant succession exist, including the distinctive upper and lower tree-line of the Aletsch forest. The global phenomenon of climatic change is particularly well-illustrated in the region, as reflected in the varying rates of retreat of the different glaciers, providing new substrates for plant colonization.

Thun is a small city in the Bernese Highlands of Bern Canton, Switzerland. Its surface area is 21.7 km², and it had about 44,000 inhabitants in 2017. The area of what is now Thun was inhabited since the Neolithic age (mid-3rd millennium BC). The name of the city derives from the Celtic term Dunum, meaning “fortified city”. It fell to Rome in 58 BC, when Roman legions conquered almost all Switzerland, and soon became one of the main centres of Roman administration in the region. The Romans were driven out of Thun, and out of the rest of Switzerland, by the Burgundians around 400 AD. The Aar became the frontier between the Christian Burgundians and the Pagan, German-speaking Alemanni, who lived north. Thun was mentioned for the first time during the 7th century, in the chronicle of Frankish monk Fredgar. The region of Thun became a part of the Holy Roman Empire in 1033, when Conrad II gained the title of King of Burgundy [read more].

Although Berne (German: Bern) is the seat of most of the institutions of the Swiss confederation, this is only a small to medium sized city with a population of about 130,000 in the city proper and roughly 350,000 in the urban agglomeration. It sits on a peninsula formed by the meandering turns of the river Aare. The remarkable design coherence of Berne’s old town has earned it a place on the UNESCO World Heritage List. It has 6.4 km (4 miles) of arcaded walkways along streets decked out with fountains and clock-towers. There are Tourist Information Centres outside the main railway station, and in the Old Tram Depot next to the Bear Pit. Berne was founded in 1191 by Duke Berthold V von Zähringen and was part of the Holy Roman Empire. It was made a free imperial city by the Holy Roman Emperor Frederick II in 1218 after Berthold died without an heir [read more].

Zurich (German: Zürich, Swiss German: Züri) is the largest city in Switzerland, with a population of some 435,000 (2018) in the city, and 1.3 million (2009) in the metro area. Zurich is on Lake Zurich, where the lake meets the river Limmat, in the north of Switzerland. While Zurich is the country’s financial centre and has the busiest airport, Berne is the Swiss capital. Zurich is Switzerland’s biggest city and a cultural center of German-speaking Switzerland. Despite it not being the administrative capital of any more than its Kanton, Zurich punches well above its weight in terms of major media and business headquarters and due to it being at the heart of Switzerland’s excessively punctual and meticulously maintained train network and being home to Switzerland’s most important airport, it is often the first part of Switzerland that visitors get to see. Zurich is close to some excellent skiing resorts and many people headed for the Swiss Alps don’t spend much time in Zurich itself, but you’d be missing a lot if you don’t stay in Zurich for a couple of days at least [read more].