This volcanic archipelago, with its spectacular landscapes, is situated off the coast of the Hebrides and comprises the islands of Hirta, Dun, Soay and Boreray. It has some of the highest cliffs in Europe, which have large colonies of rare and endangered species of birds, especially puffins and gannets. The archipelago, uninhabited since 1930, bears the evidence of more than 2,000 years of human occupation in the extreme conditions prevalent in the Hebrides. Human vestiges include built structures and field systems, the cleits and the traditional Highland stone houses. They feature the vulnerable remains of a subsistence economy based on the products of birds, agriculture and sheep farming. 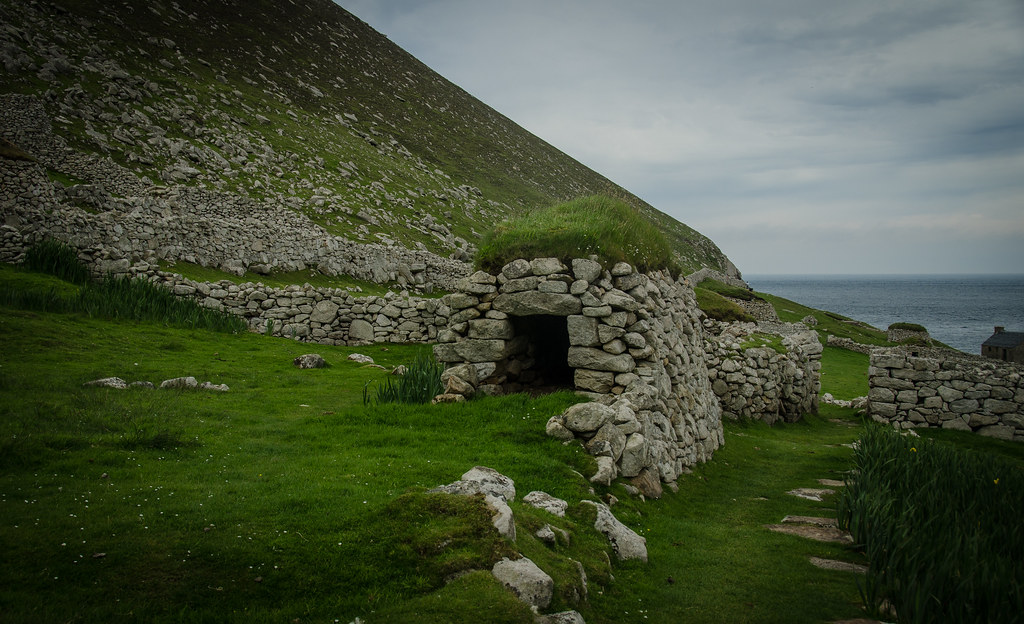 The tiny archipelago of St Kilda, lying off the west coast of mainland Scotland, is breathtaking. Formed from the rim of an ancient volcano associated with the opening up of the North Atlantic some 65-52 million years ago, the intensely dramatic, jagged landscape of towering cliffs – some of the highest sea cliffs in Europe – and sea stacks present stark black precipitous faces plunging from steep grass-green slopes in excess of 375m. Scenically, every element appears vertical, except the smooth amphitheatre of VillageBay on Hirta with its relict historic landscape. Exposure to some of the greatest wave heights and strongest wind speeds in Europe plays a major role in shaping the coastal ecology.

With nearly one million seabirds present at the height of the breeding season, St Kilda supports the largest seabird colony in the north-east Atlantic, its size and diversity of global significance making it a seabird sanctuary without parallel in Europe. The very high bird densities that occur in this relatively small area, conditioned by the complex and different ecological niches existing in the site and the productivity of the surrounding sea, make St Kilda unique. Of particular significance are the populations of Northern Gannet, Atlantic Puffin and Northern Fulmar. The sight and sound of these myriad seabirds adds significantly to the scenic value and to the experience of the archipelago during the breeding season.

The islands’ isolation has led to two outstanding examples of remote island ecological colonisation and subsequent genetic divergence in the two endemic sub-species, the St Kilda Wren and St Kilda Fieldmouse. The feral Soay sheep, so much a feature of the landscape, represent an ancient breed, descendents of the most primitive domestic sheep found in Europe. They provide a living testament to the longevity of human occupation of St Kilda and, in addition, are a potentially significant genetic resource.

The combination of oceanic influences (proximity of deep ocean currents along the continental slope, extreme exposure to waves and oceanic swell, high water clarity) and local geology around the archipelago has created a marine environment of unparalleled richness and colour. The seabed communities are outstanding in terms of biodiversity and composition, including ‘northern’ and ‘southern’ species at the extremes of their range. The plunging underwater rock faces are festooned with sea life – a kaleidoscope of colour and form kept in constant motion by the Atlantic swell, creating an underwater landscape of breathtaking beauty. The complex ecological dynamic in the marine environment is essential to maintenance of both the terrestrial and marine biodiversity.

Overlaying the spectacular natural landscape and giving scale to it all, is a rich cultural landscape that bears exceptional testimony to millennia of human occupation. Recent research indicates that the archipelago has been occupied on and off for over 4000 years. The landscape including houses, large enclosures and cleits – unique drystone storage structures found, in their hundreds, across the islands and stacks within the archipelago – culminates in the surviving remains of the nineteenth and twentieth century cultural landscape of Village Bay. The time depth, preservation and completeness of the physical remains, provides a tangible and powerful link to the islands’ past history, its people and their way of life, a distinctive existence, shaped by the St Kildan’s response to the peculiar physical and geographic setting of the islands.

The islands provide an exceptionally well preserved and documented example of how, even in the most extreme conditions of storm-swept isolated island living, people were able to live for thousands of years from exploiting natural resources and farming. They bear physical witness to a cultural tradition that has now disappeared, namely reliance on seabird products as the main source of livelihood and sustenance, alongside subsistence farming. These age-old traditions and land uses that have so shaped the landscape, have also unquestionably contributed to its aesthetic appeal.

St Kilda represents subsistence economies everywhere – living off the resources of land and sea and changing them over time, until external pressures led to decline, and, in 1930, to the abandonment of the islands. The poignancy of the archipelago’s history, and the remarkable fossilised landscape, its outstanding and spectacular natural beauty and heritage, its isolation and remoteness, leave one in awe of nature and of the people that once lived in this spectacular and remarkable place.

Criterion (v): The cultural landscape of St Kilda is an outstanding example of land use resulting from a type of subsistence economy based on the products of birds, cultivating land and keeping sheep. The cultural landscape reflects age-old traditions and land uses, which have become vulnerable to change particularly after the departure of the islanders.

Criterion (vii): The scenery of the St Kilda archipelago is particularly superlative and has resulted from its volcanic origin followed by weathering and glaciation to produce a dramatic island landscape. The precipitous cliffs and sea stacks as well as its underwater scenery are concentrated in a compact group that is singularly unique.

Criterion (ix): St Kilda is unique in the very high bird densities that occur in a relatively small area, which is conditioned by the complex and different ecological niches existing in the site. There is also a complex ecological dynamic in the three marine zones present in the site that is essential to the maintenance of both marine and terrestrial biodiversity.

Criterion (x): St Kilda is one of the major sites in the North Atlantic and Europe for seabirds with over 1,000,000 birds using the island. It is particularly important for gannets, puffins and fulmars. The maritime grassland turf and underwater habitats are also significant and an integral element of the total island setting. The feral Soay sheep are also an interesting rare breed of potential genetic resource significance.

North Uist (Gaelic Uibhist A Tuathis) is an island in the Western Isles or Outer Hebrides of Scotland. It measures about 20 miles north-south, 25 miles east-west, and is separated from Benbecula to the south by a tidal ford, nowadays bridged by a causeway. It’s thinly populated (1200 residents), low-lying and dotted by innumerable lochans or small lakes. Lochmaddy (Loch nam Madaidh) on the east coast is the ferry port and what passes for the main village, but most settlement is scattered along the west coast, where the machair provides grazing for crofting. North Uist, like the rest of the Highlands and Islands, was drained of its population both by voluntary emigration and by eviction to make way for sheep farming. In Sollas in 1849 there was a pitched battle between residents and evicting officers. Gaelic language and culture was historically persecuted heavily by the Scottish and British authorities in the Outer Hebrides [read more].

Stornoway (Gaelic Steòrnabhagh) is the main town on Lewis and the admin centre for all of Scotland’s Outer Hebrides. Indeed it’s the only town in these islands; it has the best amenities and transport links, and it’s the obvious base for exploring both Lewis and Harris. See An Lanntair Art Centre. Arts centre offering exhibitions, concerts and films; Lews Castle (Museum nan Eilean). The castle was built in the 1850s for Sir James Matheson who made his fortune in the far eastern opium trade. To build it he demolished the remnants of the preceding medieval castle, whilst losing the “i” from Lewis. It was later sold to Lord Leverhulme the soap tycoon. In the 20th century it was used as a navy air base and as student accommodation then fell into disuse, but was refurbished from 2011. It now houses Museum & Tasglann nan Eilean, the museum and archive of island life [read more].