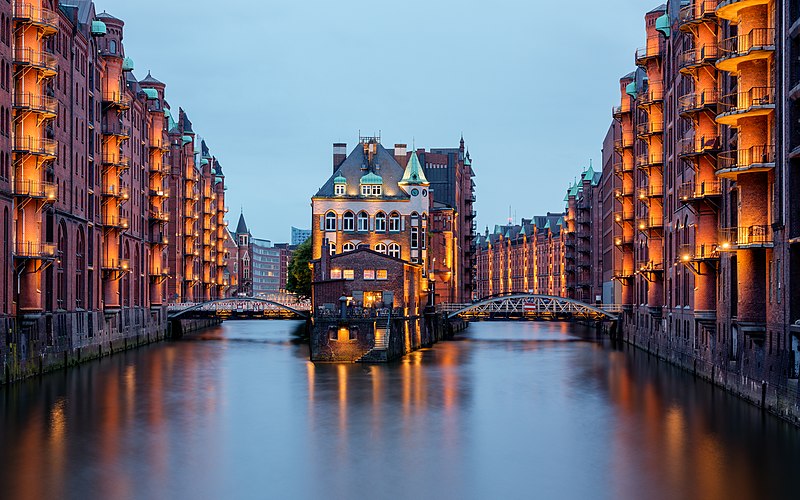 Speicherstadt and the adjacent Kontorhaus district are two densely built urban areas in the centre of the port city of Hamburg. Speicherstadt, originally developed on a group of narrow islands in the Elbe River between 1885 and 1927, was partly rebuilt from 1949 to 1967. It is one of the largest coherent historic ensembles of port warehouses in the world (300,000 m2). It includes 15 very large warehouse blocks as well as six ancillary buildings and a connecting network of short canals. Adjacent to the modernist Chilehaus office building, the Kontorhaus district is an area of over five hectares featuring six very large office complexes built from the 1920s to the 1940s to house port-related businesses. The complex exemplifies the effects of the rapid growth in international trade in the late 19th and early 20th centuries.

Speicherstadt and the adjacent Kontorhaus district are two densely built central urban areas in the German port city of Hamburg. Speicherstadt, originally developed on a 1.1-km-long group of narrow islands in the Elbe River between 1885 and 1927 (and partly rebuilt from 1949 to 1967), is one of the largest unified historic port warehouse complexes in the world. The adjacent Kontorhaus district is a cohesive, densely built area featuring eight mainly very large office complexes that were built from the 1920s to the 1950s to house businesses engaged in port-related activities. Together, these neighbouring districts represent an outstanding example of a combined warehouse-office district associated with a port city. Speicherstadt, the “city of warehouses,” includes 15 very large warehouse blocks that are inventively historicist in appearance but advanced in their technical installations and equipment, as well as six ancillary buildings and a connecting network of streets, canals and bridges. Anchored by the iconic Chilehaus, the Kontorhaus district’s massive office buildings stand out for their early Modernist brick-clad architecture and their unity of function. The Chilehaus, Messberghof, Sprinkenhof, Mohlenhof, Montanhof, former Post Office Building at Niedernstrasse 10, Kontorhaus Burchardstrasse 19-21 and Miramar-Haus attest to architectural and city-planning concepts that were emerging in the early 20th century. The effects engendered by the rapid growth of international trade at the end of the 19th century and the first decades of the 20th century are illustrated by the outstanding examples of buildings and ensembles that are found in these two functionally complementary districts.

Criterion (iv): Speicherstadt and Kontorhaus District with Chilehaus contains outstanding examples of the types of buildings and ensembles that epitomize the consequences of the rapid growth in international trade in the late 19th and early 20th centuries. Their high-quality designs and functional construction, in the guise of historicism and Modernism, respectively, make this an exceptional ensemble of maritime warehouses and Modernist office buildings.

The Free and Hanseatic City of Hamburg (Freie und Hansestadt Hamburg) is Germany’s second-largest city and, at the same time, one of Germany’s 16 federal states or Bundesländer. Prior to the formation of the modern German state, Hamburg for centuries enjoyed a status as de facto independent city state and regional power and trade hub in the North Sea. Although situated over 100 km (62 mi) upriver from the North Sea on the Elbe, Hamburg has been one of Europe’s most important ports for centuries, as reflected in its full name referencing the Hanseatic League. The city was built upon a number of islands formed by the wide river and its larger and smaller tributaries, and a huge part of its southern half is occupied by the massive port. With a tumultuous history preserved in more than just the ancient name, Hamburg grew to become one of Germany’s most affluent cities, today hosting almost 1.8 million inhabitants and forming a metropolitan centre for many smaller cities and towns in neighbouring federal states [read more].

The Free Hanseatic City of Bremen is a city in northern Germany with a major port on the River Weser. The population is 548,000. It is also the name of one of the states of Germany which consists of two separated enclaves on the River Weser; the other enclave, Bremerhaven, is covered by its own article. Bremen was once a member of the medieval Hanseatic League and is still one of the most important cities in northern Germany. Together with the city of Bremerhaven on the North Sea it forms Germany’s smallest state. Bremen has more than 1200 years of history, and was, for most of its existence, an independent city-state. The Bremer Stadtmusikanten (Town Musicians of Bremen) perhaps the most well known figures associated with Bremen are characters from the Brothers Grimm fairy tale of the same name. Their image adorns many of the souvenirs in the city. Next to the Town Hall is a much photographed statue of them [read more].

Hanover (German: Hannover, Low Saxon: Hannober) is the capital of Lower Saxony in Germany. Hanover built a huge exhibition complex for the World Expo in 2000 and has been host to several of the biggest exhibitions in the world. Consequently, it calls itself the “Expo City” or “Exhibition City” (Expo Stadt/Messestadt). Hanover also played host to the 2006 Association Football World Cup. The major language spoken is German. English is not common, except during major international events. Nevertheless most people understand English and will be able to help you find your way around. Hanover was one of the hardest hit during World War II, leaving it with only a few historical landmarks. Don’t expect to see beautiful centuries-old buildings; even the Old City (Altstadt) area is “new”, as all the old houses left standing after the war (around 40) were taken from throughout the city and collected in one place [read more].