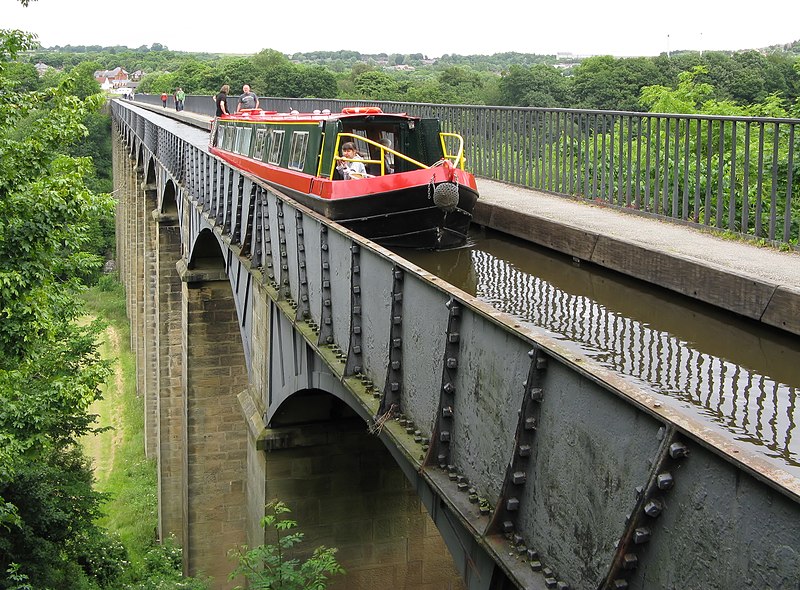 Situated in north-eastern Wales, the 18 kilometre long Pontcysyllte Aqueduct and Canal is a feat of civil engineering of the Industrial Revolution, completed in the early years of the 19th century. Covering a difficult geographical setting, the building of the canal required substantial, bold civil engineering solutions, especially as it was built without using locks. The aqueduct is a pioneering masterpiece of engineering and monumental metal architecture, conceived by the celebrated civil engineer Thomas Telford. The use of both cast and wrought iron in the aqueduct enabled the construction of arches that were light and d strong, producing an overall effect that is both monumental and elegant. The property is inscribed as a masterpiece of creative genius, and as a remarkable synthesis of expertise already acquired in Europe. It is also recognized as an innovative ensemble that inspired many projects all over the world. 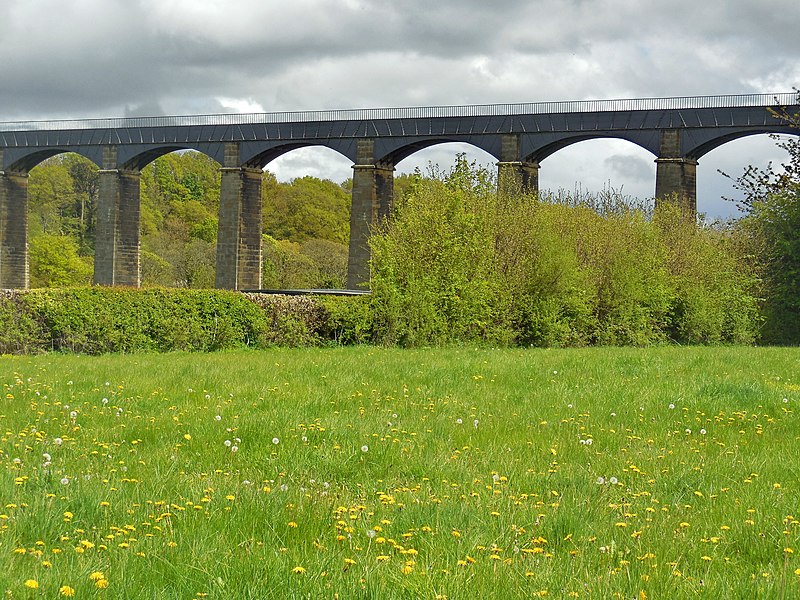 The Pontcysyllte Canal is a remarkable example of the construction of a human-engineered waterway in a difficult geographical environment, at the end of the 18th century and the start of the 19th century. It required extensive and boldly conceived civil engineering works. The Pontcysyllte Aqueduct is a pioneering masterpiece of engineering and monumental architecture by the famous civil engineer Thomas Telford. It was constructed using metal arches supported by tall, slender masonry piers. The Pontcysyllte Aqueduct and Canal are early and outstanding examples of the innovations brought about by the Industrial Revolution in Britain, where they made decisive development in transport capacities possible. They bear witness to very substantial international interchanges and influences in the fields of inland waterways, civil engineering, land-use planning, and the application of iron in structural design.

Criterion (i): The Pontcysyllte Aqueduct is a highly innovative monumental civil engineering structure, made using metal arches supported by high, slender masonry piers. It is the first great masterpiece of the civil engineer Thomas Telford and formed the basis of his outstanding international reputation. It bears witness to the production capacities of the British ironmaking industry, which were unique at that time.

Criterion (ii): The intensive construction of canals in Great Britain, from the second half of the 18th century onwards, and that of the Pontcysyllte Canal in particular in a difficult region, bear witness to considerable technical interchanges and decisive progress in the design and construction of artificial waterways.

Criterion (iv): The Pontcysyllte Canal and its civil engineering structures bear witness to a crucial stage in the development of heavy cargo transport in order to further the Industrial Revolution. They are outstanding representatives of its new technical and monumental possibilities.

Liverpool is a city in Merseyside, England, within the historic county boundaries of Lancashire, famed for its football teams, the Grand National horse race, music (including The Beatles), vibrant nightlife and its links with the arts and culture. Historically the city served as one of the leading ports linking Europe to the Americas, expanding to become England’s second most populated city by the census of 1861, before slowly declining after 1921 as levels of transatlantic shipping dropped. Before airline travel, many Europeans migrating to the New World passed through the city, particularly the Italians and Irish; to this day the city enjoys a large Irish community, with impressive cathedrals for both Anglican and Roman Catholic faiths. [read more]

Manchester is a vibrant, post-industrial gem at the heart of North West England. The city formerly nicknamed ‘Cottonopolis’ (a reference to its most famous export) has hung up its clogs and, thanks to successive regeneration projects, is now a major centre for culture and commerce; seen by many as the capital of the north of England, and sometime regarded as England’s second city. The site of the world’s oldest surviving passenger railway station and arguably the birthplace of socialism and the industrial revolution, Manchester remains at the vanguard of British culture and technology with a verve and vibe of its own. [read more]