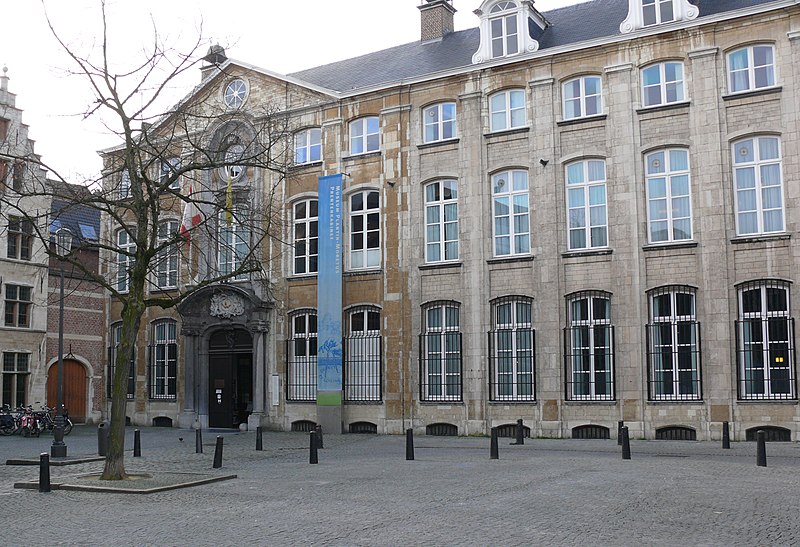 The Plantin-Moretus Museum is a printing plant and publishing house dating from the Renaissance and Baroque periods. Situated in Antwerp, one of the three leading cities of early European printing along with Paris and Venice, it is associated with the history of the invention and spread of typography. Its name refers to the greatest printer-publisher of the second half of the 16th century: Christophe Plantin (c. 1520–89). The monument is of outstanding architectural value. It contains exhaustive evidence of the life and work of what was the most prolific printing and publishing house in Europe in the late 16th century. The building of the company, which remained in activity until 1867, contains a large collection of old printing equipment, an extensive library, invaluable archives and works of art, among them a painting by Rubens.

The Plantin-Moretus House-Workshops-Museum Complex is the only surviving printing workshop and publishing house in the world dating back to the Renaissance and Baroque periods. Situated in Antwerp, one of the three leading cities of early European printing along with Paris and Venice, it is associated with the history of the invention and dissemination of typography. Its name refers to the greatest printer-publisher of the second half of the 16th century, Christophe Plantin (c. 1520-1589), and his son-in-law, Jan Moretus I (1543-1610), who took over the best-equipped printing company in Europe upon Plantin’s death. It was thanks to the Moretus family that the firm’s production activities continued in the same location for three centuries, from 1576 to 1867. Ten years later, the Complex was opened as a museum dedicated to presenting the relationship between the living environment of the family, the world of work, and the world of commerce during the 16th, 17th, and 18th centuries.

The Complex evolved over the centuries to include a patrician mansion as well as north, south, west, and east wings, added to the 1576-1580 core in three phases (1578-1584, 1620-1640, and 1760-1763), creating an interior courtyard. In addition to its outstanding architectural value, the Complex contains exhaustive evidence of the life and work of what was the most prolific printing and publishing house in Europe in the late 16th century. Within its walls are the  equipment of the workshops (printing-press, foundry, typesetting room), the furnishings that have remained in situ (equipment, tools, an extensive library, furniture, portraits), the invaluable business archives of the Officina Plantiniana (inscribed in UNESCO’s Memory of the World Register of documentary heritage in 2001), and works of art, including paintings from the workshop of Rubens.

Criterion (ii): Through the publications of the Officina Plantiniana, the Plantin-Moretus Complex is a testimony to the major role played by this important centre of 16th-century European humanism in the development of science and culture.

Criterion (iii): Considered as an integral part of the Memory of the World (UNESCO, 2001), the Plantinian Archives, including the business archives of the Officina, the books of commercial accounts and the correspondence with a number of world-renowned scholars and humanists, provide an outstanding testimony to a cultural tradition of the first importance.

Criterion (iv): As an outstanding example of the relationship between the living environment of a family during the 16th, 17th and 18th centuries, the world of work and the world of commerce, the Plantin-Moretus Complex is of unrivalled documentary value relating to significant periods of European history: the Renaissance, the Baroque and Classicism.

Antwerp (Dutch: Antwerpen, French: Anvers) is the capital of the eponymous province in the region of Flanders in Belgium. At a population of just over half a million people (2018), it is the second largest city in Belgium (after Brussels), and it has a major European port. Due to its long and culturally rich history, the city of Antwerp houses many interesting historical buildings from different historical periods, and many interesting museums. Antwerp is also known as the global diamond trade hub – more than 70% of all diamonds are traded in Antwerp. Antwerp has grown to become a trendy city, attracting many Flemish and foreign artists, writers, intellectuals, and actors. This is reflected in the city’s many trendy bars and shops. Antwerp is a city with many faces. While it may not be as historically preserved as Bruges or Ghent, it is a very dynamic city, offering a perfect mix of history and present-day modern life [read more].

Ghent (Dutch: Gent, French: Gand) is a city in East Flanders in Belgium. Ghent is a city with a population of a quarter of a million, with rich history. At the same time, Ghent has a relatively high proportion of young people, and a significant seasonal student population. During the Middle Ages, Ghent was one of the richest and most powerful cities in Europe. It was once considered the second largest city north of the Alps, after Paris. The impact of this rich past can be clearly seen when viewing the imposing architecture of churches and the houses of rich traders. The whole of the city center is restored in this fashion, and still breathes the atmosphere of a thriving late-medieval city state. As the city council made the center free of cars, it is now a very welcoming and open area, which does not fail to impress even the people who live there [read more].

Charleroi, located on the river Sambre, is the third largest municipality and fifth-largest city of Belgium situated in Hainaut province of Wallonia, the French speaking part of Belgium. A former mining town, it is viewed unfavourably by most Belgians, who often look down on Charerloi as a poor, polluted, derelict, and violent city that is not attractive at all. Nevertheless, Charleroi indeed has its share of attractions, including unique museums such as the internationally-acclaimed Museum of Photography. It played an important role in the development of the Belgian comic strip culture, and in the world of modern dance, Charleroi has also become an important place due to its yearly festival. Charleroi also sees a high share of tourist traffic among Belgian municipalities as it is the location of the low-cost “Brussels South-Charleroi airport”. While most tourists head straight from the airport to Brussels and other locations in Belgium, France and the Netherlands, the city itself is worth a go as well  [read more].