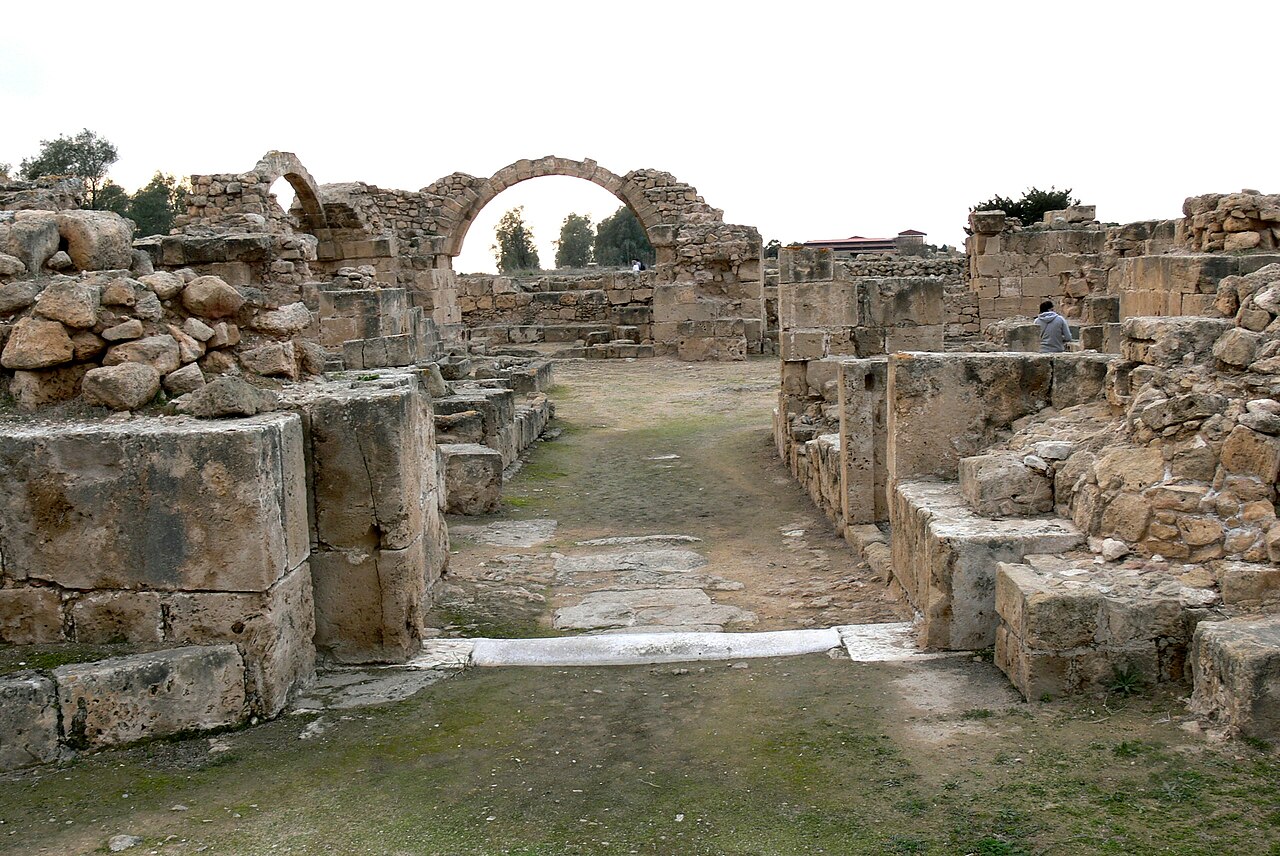 Paphos has been inhabited since the Neolithic period. It was a centre of the cult of Aphrodite and of pre-Hellenic fertility deities. Aphrodite’s legendary birthplace was on this island, where her temple was erected by the Myceneans in the 12th century B.C. The remains of villas, palaces, theatres, fortresses and tombs mean that the site is of exceptional architectural and historic value. The mosaics of Nea Paphos are among the most beautiful in the world.

Paphos, situated in the District of Paphos in western Cyprus, is a serial archaeological property consisting of three components at two sites: the town of Kato Paphos (Site I), and the village of Kouklia (Site II). Kato Paphos includes the remains of ancient Nea Paphos (Aphrodite’s Sacred City) and of the Kato Paphos necropolis known as Tafoi ton Vasileon (“Tombs of the Kings”), further to the north. The village of Kouklia includes the remains of the Temple of Aphrodite (Aphrodite’s Sanctuary) and Palaepaphos (Old Paphos). Because of their great antiquity, and because they are closely and directly related to the cult and legend of Aphrodite (Venus), who under the influence of Homeric poetry became the ideal of beauty and love, inspiring writers, poets, and artists throughout human history, these two sites can indeed be considered to be of outstanding universal value.

Paphos, which has been inhabited since the Neolithic period, was a centre of the cult of Aphrodite and of pre-Hellenic fertility deities. Aphrodite’s legendary birthplace was on the island of Cyprus, where her temple was erected by the Myceneans in the 12th century BC and continued to be used until the Roman period. The site is a vast archaeological area, with remains of villas, palaces, theatres, fortresses and tombs. These illustrate Paphos’ exceptional architectural and historic value and contribute extensively to our understanding of ancient architecture, ways of life, and thinking. The villas are richly adorned with mosaic floors that are among the most beautiful in the world. These mosaics constitute an illuminated album of ancient Greek mythology, with representations of Greek gods, goddesses and heroes, as well as activities of everyday life.

Criterion (iii): Cyprus was a place of worship of pre-Hellenic fertility deities since the Neolithic period (6th millennium BC). Many of the archaeological remains are of great antiquity; the Temple of Aphrodite itself dates from the 12th century BC, and bears witness to one of the oldest Mycenaean settlements. The mosaics of Nea Paphos are extremely rare and are considered amongst the finest specimens in the world; they cover the Hellenistic period to the Byzantine period. One of the keys to our knowledge of ancient architecture, the architectural remains of the villas, palaces, fortresses, and rock-hewn peristyle tombs of Paphos are of exceptional historical value.

Criterion (vi): The religious and cultural importance of the cult of Venus, a local fertility goddess of Paphos that became widely recognized and celebrated as a symbol of love and beauty, contributes to the Outstanding Universal Value of this property.

Limassol is the second largest city (after the capital, Nicosia) of Cyprus. Following the Turkish invasion in 1974, it has become the principal sea port and has also developed into a significant tourist destination. Limassol is the second largest town in Cyprus after Nicosia, with population of approximately 200,000. Apart from being a major tourist destination, it is also a principal hub for international business in Cyprus. This gives Limassol a more cosmopolitan feel compared to other district centers. Renovation projects in the old town and old port area are seeking to rejuvenate the historic centre, making it more accessible and interesting for sightseeing. Limassol is about 40 minutes drive away from 1 Larnaca International Airport and 2 Paphos Airport. Larnaca mainly serves traditional airlines, while most of RyanAir flights land in Paphos. There is a regular shuttle bus service from Larnaca and Paphos airports. Be careful to arrange pick-up from the shuttle bus stops, as they are away from the central areas [read more].

Nicosia is the centrally located capital of Cyprus and by far the largest city on the island. It also acts as a separate administrative capital for the Nicosia district. Nicosia is one of the very few divided capitals in the world. The barbed wire and guardtowers of the Green Line cuts the town in two, with the northern side being the capital of the self-proclaimed Northern Cyprus and the southern half being the capital of the Republic of Cyprus. The municipality of Nicosia governs only the central portion, but the city now sprawls for several kilometers and has engulfed surrounding villages and settlements. Its population hovers around 250,000 (a third of the total population of Cyprus) but the city has a feel of one much larger. It is the administrative and financial hub of the island as well as home to several universities, colleges and other educational establishments. It also hosts most foreign embassies and offshore companies (a big industry in Cyprus nowadays) [read more].

Strovolos is a municipality of Nicosia District. With a population of nearly 70,000, it is the second most populated municipality in Cyprus, after Limassol, and the most populated municipality of Nicosia District. It was established in 1986. Strovolos is now a town covering 25 square kilometres (9.7 sq mi) divided into six parishes: Chryseleousa, Ayios Demetrios, Apostolos Varnavas kai Ayios Makarios, Ayios Vasilios, National Martyr Kyprianos and Stavros. The name Strovolos is said to originate from the Greek word “strovilos” (Στρόβιλος) as in “anemo-strovilos” which means whirlwind or twister. There are references to Strovolos or Strovilos as early as the Middle Ages from the well-known medieval chronicler Leontios Makhairas, and from Florius Boustronius a little later. According to these sources, Strovolos was a royal field during the years of Frankish Rule. A major and definitive figure in the history of Strovolos was the National Martyr, Archbishop Kyprianos, who before the 1821 Revolution in Greece, contributed greatly to the preservation of the Greek spirit and Christianity [read more].