Palaces and Parks of Potsdam and Berlin 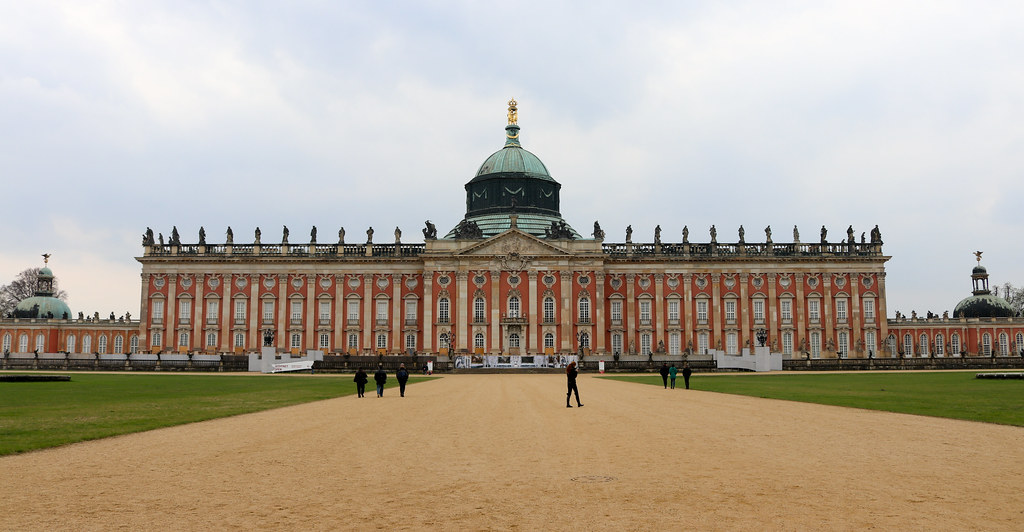 With 500 ha of parks and 150 buildings constructed between 1730 and 1916, Potsdam’s complex of palaces and parks forms an artistic whole, whose eclectic nature reinforces its sense of uniqueness. It extends into the district of Berlin-Zehlendorf, with the palaces and parks lining the banks of the River Havel and Lake Glienicke. Voltaire stayed at the Sans-Souci Palace, built under Frederick II between 1745 and 1747.

The Palaces and Parks of Potsdam and Berlin (Sanssouci) represent a self-contained ensemble of architecture and landscape gardening in the 18th and 19th centuries. This ensemble, having an outstanding artistic rank, has its origin in the work of the most significant architects and landscape gardeners of their time in Northern Germany – G.W. von Knobelsdorff (1699-1753), C. von Gontard (1731-1791), C.G. Langhans (1732-1808), K.F. Schinkel (1781-1841), P.J. Lenné (1789-1866) and their co-operators. Together with highly imaginative sculptors, painters, craftsmen, building workers, and gardeners, they created Sanssouci, the New Garden, the Park of Babelsberg, and other grounds in the surrounding area of Potsdam as an overall work of art of high quality, European rank, and international standing.

The World Heritage property enfolds the Palaces and Parks of Potsdam and Berlin including buildings, parks, and designed spaces, which are intuitively, territorially and historically aligned with Sacrow Castle and Park and the Sauveur Church.

The cultural landscape with its parks and buildings was designed and constructed between 1730 and 1916 in a beautiful region of rivers, lakes, and hills. The underlying concept of Potsdam was carried out according to Peter Joseph Lenné’s plans, which he designed after the mid-1800s, to transform the Havel landscape into the cultural landscape it is today. These designs still determine the layout of Potsdam’s cultural landscape. The ensemble of parks of Potsdam is a cultural property of exceptional quality. It forms an artistic whole, whose eclectic nature reinforces its sense of uniqueness.

In Potsdam, the World Heritage property includes Sanssouci Park, the Lindenallee Avenue west of the New Palace, the Former Gardener’s Training School, former Railway Station of the Emperor and its environs, Lindstedt Palace and its low-lying surroundings, the Seekoppel paddock, the Avenue to Sanssouci, the Voltaireweg Avenue as a connection between Sanssouci Park and the New Garden, the New Garden, the so-called Mirbach Wäldchen Grove and the link between Pfingstberg Hill and the New Garden, the Villa Henkel with Garden, Pfingstberg Hill, the garden at the Villa Alexander, Babelsberg Park, the approaches to Babelsberg Park, the Babelsberg Observatory, Sacrow Park, the Royal Forest around the village of Sacrow, and the Russian colony Alexandrowka with the Kapellenberg, the artificial Italian village of Bornstedt and the artificial Swiss village in Klein-Glienicke. In Berlin, it includes Glienicke Park, Böttcherberg Hill with the Loggia Alexandra, the Glienicke Hunting Lodge, and the Peacock Island (including all buildings).

Criterion (i): The ensemble of the Palaces and Parks of Potsdam is an exceptional artistic achievement whose eclectic and evolutive features reinforce its uniqueness: from Knobelsdorff to Schinkel and from Eyserbeck to Lenné, a series of architectural and landscaping masterpieces have been built within a single space, illustrating opposing and reputedly irreconcilable styles without detracting from the harmony of a general composition that has been designed progressively over time. The beginning of the construction of Friedenskirche in 1845 is a symbol of deliberate historicism: this “Nazarene” pastiche of San Clemente Basilica in Rome commemorates the laying, on 14 April 1745, of the first stone for Sanssouci, the Rococo palace par excellence.

Criterion (ii): Potsdam-Sanssouci – frequently called the “Prussian Versailles” – is the crystallization of a great number of influences from Italy, England, Flanders, Paris, and Dresden. A synthesis of art trends in European cities and courts in the 18th century, the castle and the park offer new models that have greatly influenced the development of the monumental arts and the organization of space east of the Oder.

Criterion (iv): Potsdam-Sanssouci is an outstanding example of architectural creations and Landscaping development associated with the monarchic concept of power within Europe. By the vastness of the program, these royal ensembles belong to the very distinct category of princely residences, such as Würzburg and Blenheim (included on the World Heritage List in 1981 and 1987 respectively). The bombing of 14 April 1945 has made it impossible to nominate to the World Heritage List the urban ensemble developed by Frederick William I in two stages: the “first new town”, from 1721 to 1725, and the “second new town”, beginning in 1733.

Berlin is Germany’s capital and co-extensive with the Land of Berlin, one of the 16 federal states that make up the Federal Republic of Germany. With a population of 3.8 million (2019) (and a million more in “suburbs” like Potsdam across the state line in Brandenburg), Berlin is Germany’s biggest city. The focus on and dominance of Berlin as a capital is and has historically been far weaker than that of London, Paris or Madrid, not least because of the federal nature of Germany and the havoc war and partition wreaked on the city Berlin is unusual among European capitals in many respects and the four decades of partition—28 years of them being physically separated by a wall—have also left traces. Merely a backwater town in the early 18th century, Berlin grew to be one of the most important and biggest cities in the world by the 1920s, only to lose much of its importance and historic architecture as a result of World War II and German partition [read more].

Potsdam is the capital of Brandenburg and borders Berlin. The town has a population of about 180,000 (2019). It is widely known for its castles and landscape as a World Heritage Site. Potsdam is more than 1000 years old. Many historic buildings are under re-construction after World War II and the period of the German Democratic Republic (GDR, or “East Germany”). Located about 30 km southwest of the capital, Potsdam was used as a residence for the kings of Prussia when they wanted to get away from the big-city trouble (and potential rabble-rousers) in Berlin, and in a way it still has a similar function, as many well-to-do people from Berlin have either moved here or have bought a second residence here since reunification in 1990. Potsdam also serves as the capital of the Bundesland of Brandenburg, after an attempt to reunite Berlin and Brandenburg in a single Bundesland failed in the early 1990s [read more].

Leipzig is the largest city in the German federal state of Saxony, with a population of approximately 600,000 (Oct 2019). It is the economic centre of the region, known as Germany’s “Boomtown” and a major cultural centre, offering interesting sights, shopping and lively nightlife. The Gewandhausorchester is the biggest and one of the most prominent classical orchestras in Germany, and Leipzig Zoological Garden is one of the most modern zoos in Europe. The Neuseenland, outside of Leipzig, is a huge lake district. First documented in 1015, and endowed with city and market privileges in 1165, the city of Leipzig has fundamentally shaped the history of Saxony and of Germany. It was founded at the crossing of two ancient trade routes, Via Regia and Via Imperii. Leipzig has always been known as a place of commerce and still has large trade fairgrounds and exhibition halls known as the Leipzig Messe north of the city [read more].