Old Bridge Area of the Old City of Mostar 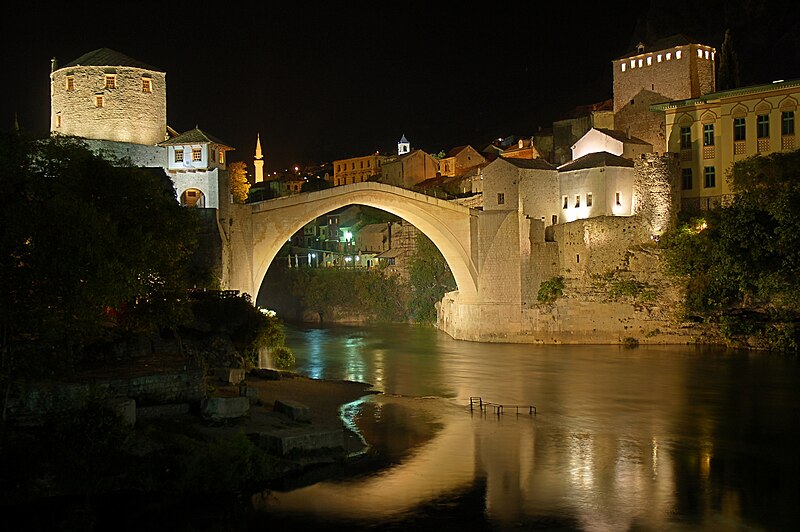 The historic town of Mostar, spanning a deep valley of the Neretva River, developed in the 15th and 16th centuries as an Ottoman frontier town and during the Austro-Hungarian period in the 19th and 20th centuries. Mostar has long been known for its old Turkish houses and Old Bridge, Stari Most, after which it is named. In the 1990s conflict, however, most of the historic town and the Old Bridge, designed by the renowned architect Sinan, was destroyed. The Old Bridge was recently rebuilt and many of the edifices in the Old Town have been restored or rebuilt with the contribution of an international scientific committee established by UNESCO. The Old Bridge area, with its pre-Ottoman, eastern Ottoman, Mediterranean and western European architectural features, is an outstanding example of a multicultural urban settlement. The reconstructed Old Bridge and Old City of Mostar is a symbol of reconciliation, international co-operation and of the coexistence of diverse cultural, ethnic and religious communities. 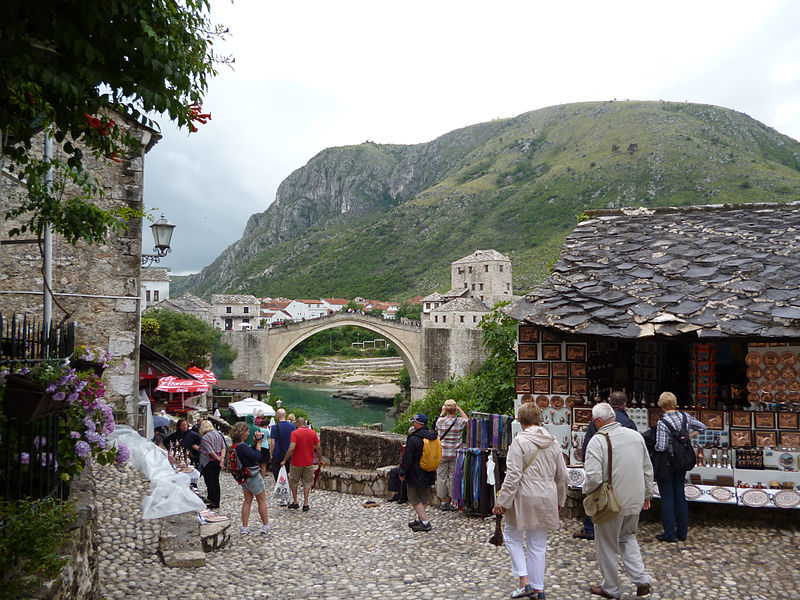 A settlement established as an urban structure in the 15th century on the crossing of a river and a land road was originally located in a valley of the Neretva River, between Hum Hill and the foot of the Velež Mountain. This relatively small settlement had two towers around the bridge, which dated 1459, as noted by written historical sources. The current name, Mostar, was mentioned for the first time in 1474 and derived from “mostari” – the bridge keepers. The historic town of Mostar developed in the 15th and 16th centuries as an Ottoman frontier town and during the short Austro-Hungarian period in the 19th and 20th centuries. Mostar has been long known for its old Turkish houses and the Old Bridge – Stari most, an extraordinary technological achievement of bridge construction. The historic part of Mostar is a result of interaction between the natural phenomena and human creativity throughout a long historical period. The essence of centuries-long cultural continuity is represented by the universal synthesis of life phenomena: the bridge and its fortresses – with the rich archeological layers from the pre-Ottoman period, religious edifices, residential zones (mahalas), arable lands, houses, bazaar, its public life in the streets and water. Architecture here presented a symbol of tolerance: a shared life of Muslims, Christians and Jews. Mosques, churches, and synagogues existed side-by-side indicating that in this region, the Roman Catholic Croats with their Western European culture, the Eastern Orthodox Serbs with their elements of Byzantine culture, and the Sephardic Jews continued to live together with the Bosniaks-Muslims for more than four centuries. A specific regional architecture was thus created and left behind a series of unique architectural achievements, mostly modest by physical dimensions, but of considerable importance for the cultural history of its people. The creative process produced a constant flow of various cultural influences that, like streams merging into a single river, became more than a mere sum of the individual contributing elements.

In the 1990 conflict, however, most of the historic town and the Old Bridge, a masterpiece designed by the famous architect, mimar Hajruddin (according to the design of his master-teacher, great architect mimar Sinan), were destroyed. The Old Bridge was rebuilt in 2004 and many of the edifices in the Old Town were restored or rebuilt with the contribution of the international scientific committee established by UNESCO.

The Old Bridge Area, with its pre-Ottoman, Eastern Ottoman, Mediterranean and Western European architectural features, is an outstanding example of a multicultural urban settlement. The reconstructed Old Bridge and Old City of Mostar are symbols of reconciliation, international cooperation and the coexistence of diverse cultural, ethnic and religious communities.

Criterion (vi): With the “renaissance” of the Old Bridge and its surroundings, the symbolic power and meaning of the City of Mostar – as an exceptional and universal symbol of coexistence of communities from diverse cultural, ethnic and religious backgrounds – has been reinforced and strengthened, underlining the unlimited efforts of human solidarity for peace and powerful cooperation in the face of overwhelming catastrophes.

Mostar is a city in Bosnia and Herzegovina, formerly one of the most ethnically diverse cities in the country, and today suffering geographical division of ethnic groups. The city was the most heavily bombed of any Bosnian city during the war in Bosnia and Herzegovina following the breakup of Yugoslavia. At the beginning of the war, air strikes destroyed many important buildings and structures, including the cultural and spiritual icon: The Old Bridge (Stari Most), which is a UNESCO World Heritage site. Mostar has been most famous for this beautiful historic Ottoman-style bridge, which spanned the Neretva river in what is considered the historic center of the city. Through combined efforts with the international community, rebuilding of The Old Bridge was completed in 2004, almost 11 years after its destruction, using some of its original pieces recovered from the Neretva river. A significant portion of the city has been rebuilt and visitors might be surprised to see that this formerly war-torn city is a lively and beautiful destination once again, particularly the area within and around the old town [read more].

Sarajevo is the capital of Bosnia and Herzegovina, and its largest city, with 430,000 citizens. Most of the city is within the Federation of Bosnia and Herzegovina, but some parts are in the Republika Srpska. Sarajevo is very tourist friendly, especially in the Old Town in the center of the city. Sarajevo is one of the most historically interesting and varied cities in Europe. It is a place where the Western and Eastern Roman Empire split; where the people of the Roman Catholic west, Eastern Orthodox east and the Ottoman south, met, lived and warred. It is both an example of historical turbulence and the clash of civilizations, as well as a beacon of hope for peace through multicultural tolerance. The city is traditionally famous for its religious diversity, with Muslims, Orthodox Christians, Catholics, and Jews coexisting here for centuries. Additionally, the city’s vast historic diversity is strongly reflected in its architecture [read more].

Banja Luka (also written Banjaluka) is a picturesque city in the western part of Bosnia and Herzegovina. It is the administrative capital and the largest city of Republika Srpska, and the second largest city in Bosnia and Herzegovina. There are many historic things to see in the city of Banja Luka. Kastel fortress on the bank of the Vrbas river with history up to Roman ages. Ferhat-Pasha Mosque, (also called Ferhadija mosque) This example of Islamic 16th century architecture was built during the time of the Ottoman rule. Built in 1579 it has a central fountain called Shaderwan, stone and iron fence. It is built in the classical Ottoman style. Ferhadija was listed as a cultural heritage of Bosnia and Herzegovina in 1950. Later it was protected by UNESCO until destroyed in 1993. The site and the remains of the mosque today are a national monument of Bosnia and Herzegovina, and the mosque is under reconstruction [read more].